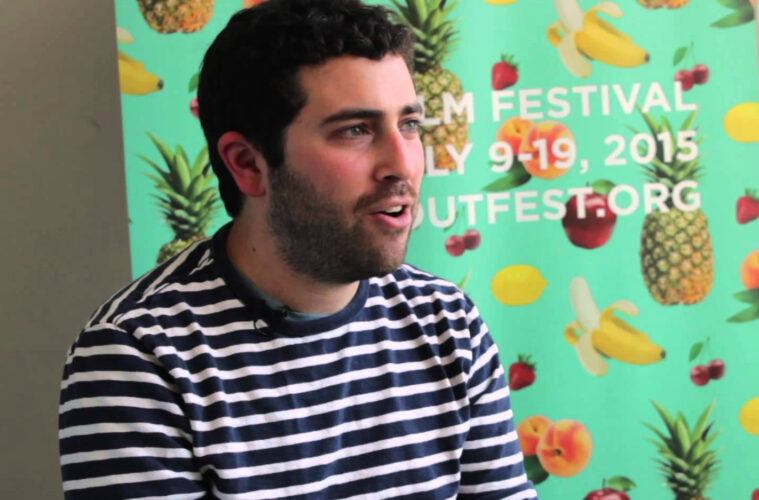 Director Andrew Nackman’s debut feature film 4th Man Out explores the issues of stereotypes about the gay community through the lens of a close group of friends coming to terms with their recently out of the closet friend. The movie features a heartwarming performance from the main cast and offers a unique perspective on the classic coming out of the closest tale. I recently had the chance to ask Nackman some questions pertaining to the film’s themes, as well as his personal influences.

When I was in college, I studied abroad at Kings College London and made a short film while I was there with several other students in a film society they had. I really enjoyed that experience and at that stage, I knew filmmaking was something I wanted to pursue but wasn't totally sure how to go about it. When I looked up the backgrounds of many filmmakers I admired, they all seemed to have gone to like the same 4 or 5 film schools, so I applied and ended up getting into USC Film School in their MFA program. At USC, I made probably a dozen short films while also crewing on other students' projects as well. My last short film there, called Paulie, ended up playing at a lot of film festivals, which led to the opportunity to make 4th Man Out.

In the film, you tackle themes of masculinity in the gay community and breaking down common stereotypes people have about gay men, what drew you to this subject initially?

When I first read the script (written by Aaron Dancik), I loved the fact that Adam was a car mechanic and strictly in terms of stereotypes, presented a departure from the typical representations of gay men in a lot of movies. And I was drawn to the subject initially because I feel like everyone has a coming out story. Whether it was your experience coming out, or as a parent, sibling or friend to someone who has, it's a situation that so many people now can identify with in some way. When we were first getting going with trying to make the movie, I told various friends about the premise and everyone seemed to jump in with their own personal story like: 'that reminds me of when my cousin came out' or 'in college, my roommate came out and we did the exact same thing', etc. Those reactions confirmed my belief that this is a universal story that people from every background could relate to.

This story is unique in the genre of coming-out stories in that it deals not only with the character Adam coming to grips with his 'outness' but his friends' reactions as well, can you talk a little bit about that?

The story to me is just as much from the perspective of his best friends as it is from Adam's. Chris, Nick, and Ortu want to be supportive but are unsure how to or are afraid of saying/doing the wrong thing. A lot of the comedy in the story derives from this, but also the heart too because we see how much they care about one of their best friends.

The setting of the film could be seen as a typical midwestern 'everyman' town, do you feel like the decision to choose a more middle America feel will help the average filmgoer who might not have experience with something like this empathize with the characters rather than setting it in a more urban setting like NYC or LA?

It was always set in a small, working-class town mainly because it just felt more believable that a group of guys in a setting like that would have difficulty adjusting to their best friend coming out. Along with that, the Americana themes that run through the movie, like the big 4th of July party on the lake, tie in well to the story's overall message about friendship and acceptance. Early on in pre-production, we actually did look around LA to see if there was any way we could fake it for the small-town setting we wanted. We'd find a single side of a brick building that looked promising but right behind it there'd be enormous palm trees and a movie billboard. It just wasn't happening.

The four main actors in the film had great chemistry together that made it believable that they were lifelong friends, what was the casting process like to create such a tight dynamic?

Our casting directors Erica Hart and Karlee Fomalont did an incredible job. They ran auditions in NYC that led us to Evan Todd and we all immediately knew he was perfect for Adam. The biggest challenge in the casting process was mainly the fact that it's really difficult to get each of the actors to come in and read together at the same time. When you're casting lifelong friends, you'd love to be able to get them all in a room together and see how they interact but in our situation, we cast each actor individually, several out of LA, many others in NY, and tried to imagine how they'd mesh. Having casting directors who perfectly understood the tone of the script and who already knew actors who'd fit each part saved us big time.

What are your biggest personal influences as a filmmaker?

The filmmakers I admire the most are great at balancing drama and comedy. Finding the humor in serious situations and finding the heart in moments that could be played just for a joke. Richard Linklater, Hal Ashby, Alexander Payne and Woody Allen are a few of the directors who I think do this really well.

You've got an infinite budget and all the time you need, what kind of project do you tackle?

Don't tempt me like this! It would be something 3-D, but with smello-vision and part of the budget would cover free popcorn and a drink to anyone who sees it in the theater. Also, the main character would have to have a pygmy goat as its best friend.

I'm working on a few scripts at the moment but the one I'm hoping to make next is a feature version of my USC short film Paulie. I've been working with David Lee, who also wrote the short film and is a friend of mine from USC. We probably went through about 10 different outlines of the story over the past couple of years but finally figured out a version we really like.