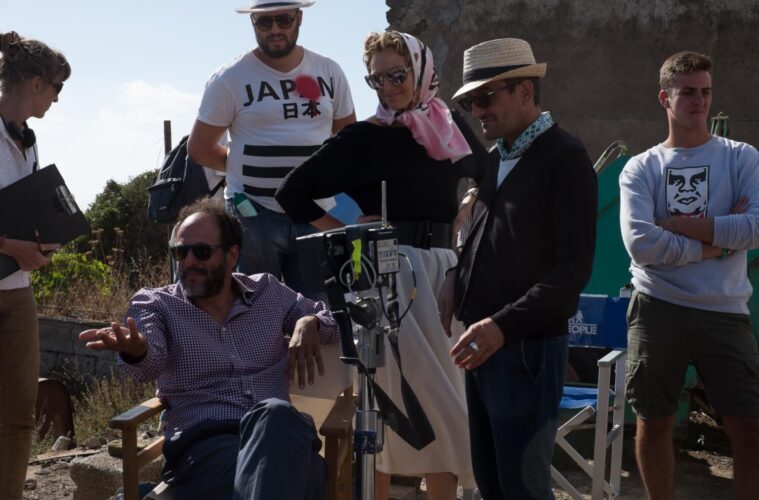 Based on the Jacques Deray production Swimming Pool, from 1969, which had inspired a François Ozon feature of the same name in 2003, now it's the turn of Italian auteur Luca Guadagnino to recreate this tale and inject his own distinctive sensibilities as a filmmaker into proceedings. Assembling a remarkable quartet of performers in Tilda Swinton, Ralph Fiennes, Matthias Schoenaerts and Dakota Johnson to tell this sensual, thrilling narrative, Guadagnino discusses why he felt so compelled to collaborate with Swinton for the third time in his career, and how much freedom he gave the actress to craft the character of Marianne Lane. He also explains why he named the film after a David Hockney painting, his greatest influences in cinema, while also commenting on that Ralph Fiennes dance scene.

This is, of course, a remake of Swimming Pool, and though this remains very unique, why did you want to tell this particular story?

I decided to embrace the offer I got from Studiocanal to revisit the Jacques Deray film from 1969, on the ground of my interest exploring the power of desire and how this invisible force can lead to very visible consequences in life. This is a subject I am very interested in generally, I found it to be very cinematic, the idea of a group of people very close to one another. I found that interaction, in a way, a canvas upon which I could use a lot of visual skills to depict a relationship, which is very interesting to me. I like the idea you can make a movie about a relationship that unfolds as a story as well, instead of starting with preordained characters that are bound to act out just what the script says.

And the title comes from a David Hockney painting?

Of course, it was a big inspiration for us. We wanted to think of the movie from the point of the view of the great artistic experiences of the 60s and to have the privilege of using the title of such a masterpiece.

There's something very Hitchcockian about this, is he just one of those filmmakers that are so ingrained into the fabric of this genre that it's difficult not to be influenced by him?

I can only speak for myself, and I can tell you that Alfred Hitchcock and Roberto Rossellini were the two pillars of my filmmaking upbringing. I think that Hitchcock is cinema itself.

You've collaborated with Tilda Swinton a few times now, and she's a wonderful actress. What's she like to work alongside? There must be a reason why you keep going back to her?

Well, there isn't a reason, there is just life, and life led me and Tilda to meet and to become dear friends and great partners. When I say great partners, I mean somebody who loves to plot things to do together, which could be a movie, a conversation, a trip. I think it's a vital necessity that we have to be with one another, and it's something beautiful.

What was the idea behind her character Marianne Lane not speaking – was that in the screenplay right from the beginning?

At the beginning the character, who in the movie is a legendary rock star, which I hope we pull off well with the opening shot, in the original script she was an actress, and when we approached Tilda to play the role she said to me, “You know what, I don't want to be an actress, I don't think it's right, I think it's the music you should follow”. Then when we started thinking of Marianne as a rockstar and it made complete sense, because Harry, played by Ralph Fiennes, and Marianne, are a musical couple, they've come from the same business, and he was the mentor to the singer, the producer. Then she went one step forward and said, “I don't want to speak because I want to try and find a different way to articulate my relationship with this flow of words that is Harry”.

Do you often allow your actors to have that sort of input? Are you always open to ideas?

I have learnt through watching films, reading interviews and studying cinema, that there is no such thing as the concept of a director who instructs people to do whatever they want to do. This is an exotic idea that leads a lot of wannabe directors to have this kind of attitude. Filmmaking is a strongly collaborative endeavor, and it must start from the collaboration. If you think about Stanley Kubrick, you will see how much of his famous control freak attitude is fake, and the making of his movies came from very strong collaborations.

To go back to Marianne, was there any particular rockstar you had in mind when crafting the role?

We wanted to make a specific creature, which was organic to the movie. Of course, we thought of Chrissie Hynde, of Róisín Murphy, we thought of Bowie too of course, but we hope she is one of a kind.

Talking of one of a kind, the Ralph Fiennes dance scene is quite something, did you have much input into that, or just let him do his own thing?

Again, in the script there was this idea that Harry unleashes his own identity in that moment of dance, and Ralph proposed to me to hire this great choreographer called Anne Yee, to help him sort out his movements, and then me, him and Anne, very strongly, side-by-side, collaborated during the months preceding the shoot to create the most realistic and organic expression of movement.

Next up for you is Suspiria – are you hopeful of reuniting some of the same members of the cast from A Bigger Splash?

We'll see, but I love them, all of them, and I'd love to work with them for the rest of my career.