A Patch of Fog – Interview with Film Director Michael Lennox 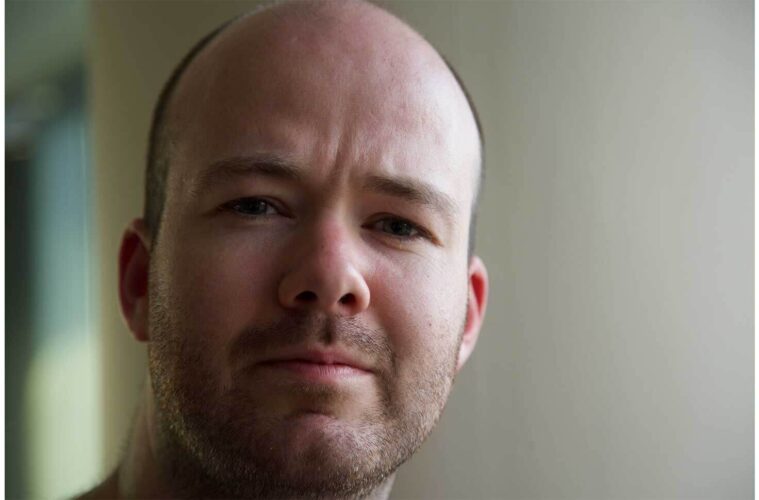 On the heels of his Oscar-nominated short Boogaloo and Graham comes Michael Lennox’s first feature, A Patch of Fog, the story of a shoplifting writer and the lonely security guard who blackmails him into friendship. Just before its digital release, the Irish director took the time to discuss his movie’s absurd comedy, the challenges it posed, and what he hopes to do next.

It’s your first feature! It must be exciting.
It’s very exciting. You start off and you want to be a filmmaker and you dream about, you know, making a film and showing it in front of an audience… For that to become a reality is brilliant.

You’ve done a bunch of shorts before this. There are six or seven listed on IMDB but I assume you’ve done a ton more, right?
Yeah. The ones that aren’t on IMDB are the ones I hope no one ever sees. Short films are sort of where you find your voice, and I hope to continue to make short films. It’s an important part of being able to progress as a filmmaker.

How did making short films prepare you for making the feature? Or was it a whole new ball game?
I think the more days you spend on set, the more confident you’re gonna become working with crews, working with actors, trying to manage the schedule… The biggest concern was the longer form, telling a story over ninety minutes. You don’t have the luxury of filming in sequential order. The biggest challenge for me was keeping the overall shape of the film, in my head, at any point. How did I film the last scene? What was the energy in the last scene? What was going on emotionally and in the character’s journey at this point, and where does he need to be now? Along with just having the stamina and focus to keep it up for so much longer. A short film you shoot in four days, and this was a twenty-two day shoot.

You’d been able to film your short films sequentially?
Yes, all of them. Boogaloo and Graham, the last short I did, I think there were a few things I had to do out of order, but for the most part, I try to film in order. It’s good for me, it’s good for the actors, you have a destination point.

What was it about the script for A Patch of Fog that resonated with you?
I’m a big fan of the old stalker movies and buddy movies. And this was a slightly different take on the genre. You don’t know who’s on top at any particular time. There’s no good guy or bad guy. There’s sort of this gray area. When I read the script for the first time, my sympathies split from Robert to Sandy back to Robert. It was constantly fluctuating. I’d look at a scene and be like, okay, this is how Sandy feels, but I’d very quickly want to know how Robert felt.

And that gray area even manifested in the genre a little bit. It’s a dark movie, but there are some comedic moments, right?
Yeah, and that was massively important from day one, especially when I was talking to Stephen Graham. We all know he’s done amazing work. He comes with that natural unpredictability. And it was very important to find Robert’s human moments, the comedy moments. There was something absurd about it, in addition to being dark. And I think that’s what spoke to me when I read the scene where, like, here’s the stalker, and here’s the victim, and they’re smoking together, they’re having dinner together. They come alive. There’s something absurdly and darkly amusing about that.

Totally. I’m remembering the scene where Robert comes to Sandy’s school for the first time and, in trying to explain him off to his colleague, Sandy claims he and Robert “go way back.” There’s this shot where Robert smiles and sort of scoots closer to Sandy. That physical comedy…
Absolutely. That physical comedy was something from the start that Stephen was really keen on. We had a lot of fun with that. In that particular moment, you know, all Robert wants is to be wanted. He wants someone to call him. So when Sandy says they’ve known each other for a long time, he gets this big grin on his face. I wanted it to seem real and genuine, and if the moments of comedy arose from that, then brilliant. If the darker moments arose from that, then great. I wasn’t ever going into a scene thinking, this scene has to be funny. And ultimately that’s what attracted me to the project. This strange balance of tone.

A lot of the movie’s filmed in two-shots, which continues to illustrate that ambiguity. It’s not about one character. It’s really a story about two men.
Yes, yes. Absolutely right. Cinema to me can be not just about words. It can be about faces. And when you’ve got two great actors, you know, I want to see them. I want to see the performances. That was my approach from the beginning.

If you had infinite resources and budget, what’s a fantasy project you’d like to tackle?
That’s brilliant… I’ve always been fascinated by the history of the vikings, especially when the vikings came to Ireland. Irish history in cinema has mainly been focused on the last hundred years. There’s this whole arena, a thousand years of kings and wars and vikings, this massive piece of history that hasn’t been touched. And I think if someone wants to give me fifty million dollars…

What are you working on now? What’s your next project?
Last year I was working on a British TV show called Endeavor, and I’m doing another TV comedy series later this year for Channel 4, and hopefully towards the end of the year, I’ll be going into pre-production on my next feature film, which is called The Back of Beyond. It’s gonna be a black comedy Irish road movie, and the irony of that is in Ireland you can get from the top to the bottom in about eight hours.

A Patch of Fog will be released on VOD and iTunes on January 24.