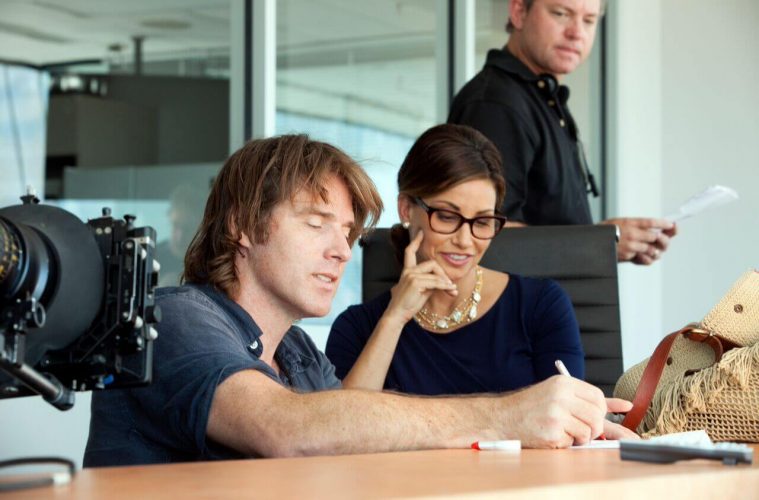 Although he makes his directorial debut with Bad Kids of Crestview Academy, Ben Browder has been well-acquainted with the film industry for years. He holds numerous acting credits under his belt, including roles in sci-fi heavy-hitters like Farscape and Stargate SG-1. This time around, Browder plays actor and director in the production of this graphic novel adaptation. The first-time filmmaker caught up with Borrowing Tape to discuss his role in the production, his artistic influences, and what’s next for him.

You previously acted in the first film of the series, Bad Kids Go to Hell. What was it like to play the character of Max this time in the sequel?
Luckily I had played him before… I was a little busy directing the film, so creating Max from scratch wasn’t required. His voice and his gait were already established, I just needed to fit in his clothes and walk in his shoes. Where it got funky was when Max arrived late in a scene or left a scene early and I would start the scene doing one job and finish it doing another.

Bad Kids of Crestview Academy also marks your directorial debut. What was the transition like—from being in front of the camera to behind it as well?
It's pretty scary. It took me the better part of a decade of work to get comfortable calling myself an actor. Being a “director” still sounds presumptuous on my tounge. Luckily, like being a parent, if you’ve had good role models you can generally muddle through, and you have heaps of people willing to advise you along the way. I’ve had both good role models and lots of great help.

In addition to some returning cast members like Cameron Deane Stewart, there’s also a new ensemble of characters. How did you like working with these actors?
I loved working with them. That sounds coy, but its true. I’m rather partial to actors having married one, and being one myself. Acting is a craft peopled by some of the most lovely and interesting people walking the Earth. The cast of Bad Kids are near and dear to my heart.

How did you ensure that Bad Kids of Crestview Academy would have the same spirit as the graphic novel, Bad Kids Go to Hell?
First off… Bad Kids in all its iterations is about the vision of Bazz, Matt, and James. The spirit of Bad Kids is in the words on the script. My job is to play midwife to their baby. I spent a lot of time saying, “push”.

What was the process like to adapt a film from a graphic novel?
It was like being handed someone’s baby. You have their precious, and you really hope you don’t drop junior on his head.

What are you most excited for audiences to see in the film?

Cockroaches. Damn Cockroaches. They’re everywhere. But since most folks aren’t interested in cockroaches… I hope audience appreciates the performances of an authentically young cast.

Who or what influences your directing style?
I’m glad you said “what” influences… First and last is always the story.What story are you telling? How do you best tell that story? I like the notion that style should service the story… not so much the other way around. I can admire “stylists”, but I’m not sure that I am one myself. I like it when form flows organically from function, resources, and environment. And after having directed only one movie I’m not sure I can be said to have a style.

Which do you prefer: acting or directing?
Directing seems more grown up… But I don’t want to be a grown up every day. It’s a coin toss.

What advice would you give to someone wanting to branch out into acting or directing?
Everyone’s path in this business is unique… But generally speaking, work hard, show up on time and ready to go! Be prepared. Be brave. Persevere. Save your money.

If you had infinite resources and budget, what is a fantasy project you would like to tackle?
I would love to have a run at Lord Fouls Bane by Stephen R Donaldson, or Patrick Rothfuss’ series if he would just finish the next book. Another great one would be Neil Gaiman's Graveyard Book.

What's next for you?
Find the next gig! I’m available after the premiere on Friday the 13th of January.

Bad Kids of Crestview Academy will be released in select theaters, iTunes and other on demand platforms on January 13.