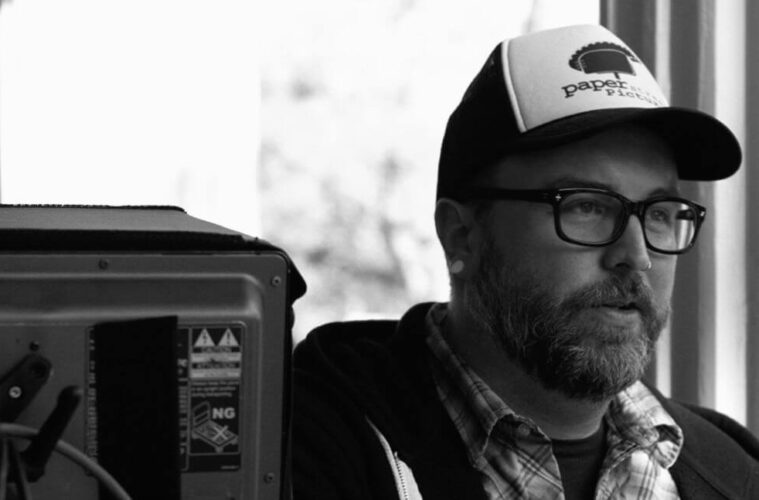 The feature debut of writer/director Aaron B. Koontz is also the first feature from his own Austin-based Paper Street Pictures. Based on his 2015 short film Aperture, Camera Obscura follows a wartime photographer who struggles with PTSD and a newly gifted camera that shows images of individuals who are soon to die.

The psychological horror thriller hits theaters on June 9th before becoming available on VOD and Digital HD June 13th, and Aaron was kind enough to answer a few questions in support of his latest release.

You're a director, writer, producer, editor. Of all these hats which one do you think you wear the best, and which do you hope to develop more fully as time goes on?
You know, that’s a tough one. I really, truly enjoy all aspects of the filmmaking process. I will say that I have found a love for Producing after making Camera Obscura and as a result will be taking on that role for some friend’s films later this year. But I think, in the end, the writing process itself might be what I get the most enjoyment out of. Just the concept of having this weird little idea that years later manifests on a screen where random people laugh or cry or shriek at is just as much rewarding as it is mind boggling to me.

What's one or some of your favorite films, and what do you think that says about you?
I’m a cinephile for sure, so films many times are about the moment for me and what I may need for this period of my life. And I’ve always been that way too. Films were an escape for me as a child and even now I find myself needing to watch something for the feeling I know it will evoke. A few films that have really remained poignant for me over the years include Magnolia, Jaws, The Shining, Eternal Sunshine of the Spotless Mind, Mulholland Drive, Edward Scissorhands, Boogie Nights, Zodiac and The Thing. More recently my favorite films have been Blue Ruin, Arrival, Drive, Raid 2 and Whiplash.

Where did this story stem from? In the film, you make a joke about this not being a Goosebumps episode, which made me immediately think of "Say Cheese and Die". Was that just an inside joke or an actual point of inspiration?
So I think the answer is a little of both? Although I wasn’t sure I knew that at the time.  So, many years ago I wrote a short script that after we sent it out to some folks we were told that this was just like Say Cheese and Die. And I swear to you, although I was a Goosebumps fan, I had never seen this, but I kid you not, our script was so damn close to this in every way. Ours got a little darker and more violent but still, the narrative structure remained. Flash forward a few years and I still liked this general idea/trope that had been known around the genre landscape for a while in regards to a haunted camera. So I wanted to see if I could dust that off and really take this a new direction. After some research into PTSD and all the legitimately frightening stories of the visions and violent outburst these poor folks endured, it really helped shape what became a key component of the story here: The unreliable narrator. Once I was able to combine those elements with some dark humor and the concept of an otherwise ordinary man doing some extraordinary things, it all really started to click and we had something that was fresh and new to us and we think the genre world. When we finished, I thought it would be apropos to call back to that first script and also touch on the inevitable comparisons to this Goosebumps episode with the joke.

What was the most difficult aspect of this production, and how did you overcome the obstacle?
One thing is for certain, I will never write a script with this many locations. Thematically I liked the idea of different things happening where you took different pictures, but this ultimately lead to what I think was 24 different locations. A feat that I challenge any crew without a second unit, and limited days, to pull off. In the end, this all came down to meticulous planning and a truly dedicated crew that could set-up and break down quickly and efficiently for days that had two or three big company moves.

What kind of experience do you hope viewers have while watching this film? What do you hope they'll take away in the end?
One of the knocks on horror is that it is predictable and follows a well-known, formula. I wanted to challenge that by pushing my audience to stay engaged and pay attention to the details. If they are willing to give me 90 minutes of their time I think they will find that we have a unique and interesting look at horror. On top of that, while I acknowledge this is a film that can and is supposed to be a bit ambiguous, I wanted to reward those who watched closely with a number of hidden clues that many might not notice on a first viewing. But I assure you, the answers do exist and are within the film, you just might have to look closely to find them.

Imagine there was someone who knew when and where you were going to die. Would you want to know?
Hell no. “It could drive you crazy” And I believe that.

If you had infinite resources and budget, what is a fantasy project you would like to tackle
Wow, so that’s tough as well. I have some passion projects that are in the early writing stages that would be amazing to have the right resources to pull off. One of which is an episodic drama/thriller series about a mysterious disappearance in a small Pacific Northwest town that is a bit True Detective (Season 1 of course) and Twin Peaks. Other than that, my true fantasy is just to keep making movies really. Over and over and for years to come.

What is next for you?
I am in various stages as a Producer on three features. An Action-Survival Horror film called Bar Fight, a noir thriller about a woman suffering from spontaneous combustion called Where The Red Fox Lies and a Horror-Comedy piece that I cannot disclose just yet.

The big project for me though that I will be Directing and Co-Writing is a Science Fiction Thriller called Dream Machine that just won best feature screenplay at the Other Worlds Sci-fi competition. I am really hoping to go into production on that later this year or early 2018.

Camera Obscura will be in theaters on June 9th
and on VOD and Digital HD on June 13th.