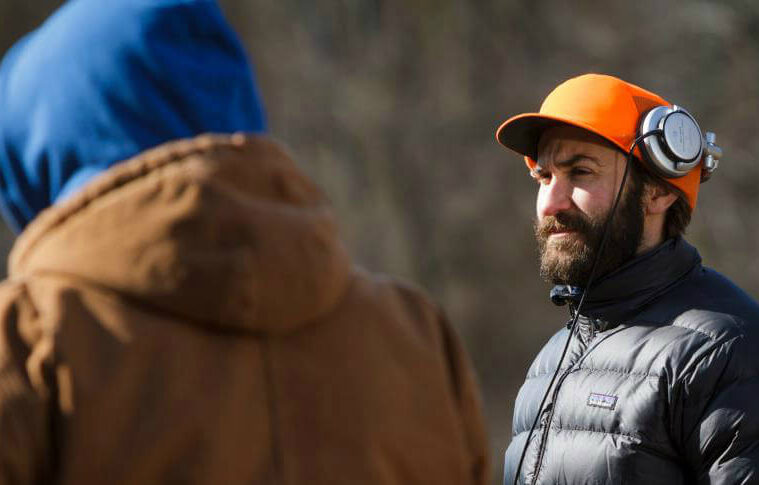 Hunter Adams' second feature film is a decades-spanning Gothic thriller revenge tale involving gypsies, rednecks, and a young girl forced to make a moral decision that will ultimately be life changing. With that being said it's safe to say it's dark, bold, and mystifying at times. Dig Two Graves stars Ted Levine, Samantha Isler, Danny Goldring, and Troy Ruptash; and on March 24th it will be available in theaters and On Demand for your viewing pleasure. Hunter Adams was kind enough to answer a few questions about his love of filmmaking and where this haunting tale began.

As a storyteller, what made you pursue filmmaking?
Wisconsin, the great state in which I grew up, is known for a handful of things; cheese, beer, the Packers, serial killers and great directors. Since I lived next door to the childhood home of Hollywood auteur Howard Hawks, I was inspired to pursue a profession in motion pictures. In college, I was drawn to acting until my eyebrow was bitten off in a bar fight. Fearing my thespian career was over, I began directing instead. After taking a few film courses with David Bordwell I became obsessed with movies. I spent my junior year in Paris, France, skipping classes at the Sorbonne to watch movies all day long. When I got back to the states I began shooting my first film, a low-budget whiskey soaked comedy called The Hungry Bull, about an alcoholic ice cream man.

Why this particular story?
I’ve always been fascinated with gypsies and hillbilly justice. I also liked the idea of a young girl forced to wrestle with a morally ambiguous decision, an adult fairy tale told from the perspective of an innocent kid.  And while I was writing the script, my mom passed away from cancer, so the writing process was a way for me to work through some of the emotions I was experiencing from the loss.

What makes this story of revenge stand out among the rest?
I think the fact that it's told primarily from the perspective of a young girl gives a unique spin to a well-worn genre. Also, it has more shades of gray than your typical revenge tale.

Where did this story stem from and how did you develop it into a feature script?
It was based on some colorful family folklore which I used as a jumping-off point for the decades-spanning revenge story.

What influences were utilized in the production of this film?
Too many influences to name them all, but off the top of my head, I’d say coming of age films like Stand By Me, classic horror like Texas Chainsaw Massacre and Rosemary’s Baby and 70s era thrillers like Deliverance. And a dash of Coen brothers mixed in there as well.

How do you know when you’ve got the right cast and crew in place to begin production?
I spent 6 months doing a nationwide casting search for a young actress to play Jake. I knew Samantha Isler was the one for the role the moment I saw her audition tape, which she sent in from Tulsa, OK. She had the perfect combination of intelligence and wide-eyed innocence. Casting her was the best decision I made in the movie.
I’ve always been a huge Ted Levine fan and was thrilled to offer him the chance to play a leading role for a change. I can’t imagine anyone else playing the role of Sheriff Waterhouse. Ted’s played so many unforgettable roles, most infamously Buffalo Bill in Silence Of The Lambs, but I think his role as Sheriff Waterhouse is one of the most nuanced and compelling performances of his career. As far as the rest of the cast, we tapped into the supremely talented crop of actors in the Chicago theater scene.

What was the most difficult day of shooting and why?
The first few days were probably the toughest because the crew was still finding its groove. We weren’t yet a well-oiled machine. Plus it was one of the coldest midwestern winters on record and we were shooting outdoors in the middle of nowhere. When you’re working in that kind of extreme weather for 10 straight hours, it takes a toll.

What’s the most important job for the director, and how do you handle that job?
Projecting confidence in the midst of mayhem and catastrophe! It's very hard to do, I recommend a shot of apple cider vinegar in the morning and a nip of brandy before bed.

How is the industry changing and what are your thoughts on the matter?
It’s easier to make a movie, but harder to sustain a career. It's frustrating that a young filmmaker is not only required to make a good movie, she’s expected to market and promote that movie as well. Indie filmmakers have to do it all and it's exhausting. Budgets are minuscule and shooting schedules are rushed. I envy filmmakers of previous generations who had the time and resources to see their visions full-filled and only had to focus on making a movie and not promoting and selling it as well. All that being said, it's never been easy to get a movie made. It's a privilege to be a filmmaker and I feel silly complaining.

If you had infinite resources and budget, what is a fantasy project you would like to tackle?
Dig Three Graves!

What's next for you?
I’m developing a limited series. It's a crime thriller set on a native American reservation, sort of a modern

Dig Two Graves will be released in select theaters and On Demand (iTunes) March 24, 2017.