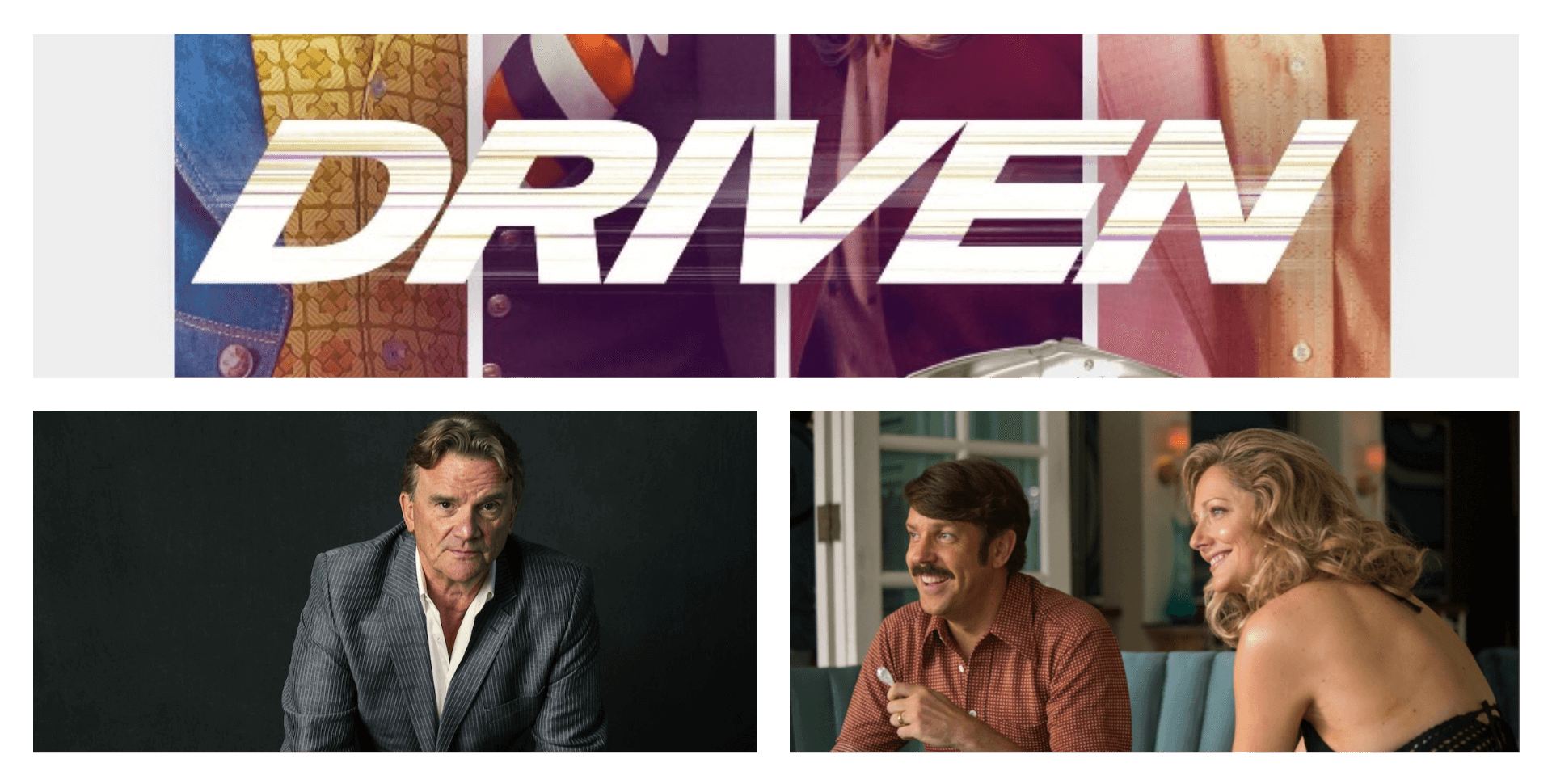 Nick Hamm kindly took the time to give Borrowing Tape an interview. Driven is in theaters and on digital/demand on August 16, 2019.

Driven was an absolute blast to watch from start to finish. Graced by a cast of great actors producing equally excellent performances from Jason Sudeikis, Lee Pace, Judy Greer, and Corey Stoll. With such an incredible cast, what was the casting process like to get the right people for each character?

With Hoffman, if you start with Hoffman first, Hoffman was a scumbag. In reality, he was a complete low-life. He was a very, very dodgy character who had a checkered history. For many years [he] had practiced the dark arts of being an informant for the FBI. When we look to that character, we also discovered somebody you could never decide what was truthful, or what was untruthful about him. You could never really decide what was the lie and what was not. But we're aware if we work the character in the script, that we needed somebody to play him who was endearing, who was smart, who was clever, but also could wink at you with a kind of knowing sense that when he was telling a lie, that he wasn't that bad of a character afterwards. In other words, you needed someone with a heart. And I think what Jason has is, he has a heart as an actor, and he's a very endearing actor to watch, as well as being really funny, and generous with his spirit. DeLorean was a narcissist. DeLorean was the coolest dude in the room. He was 6-foot plus, he was handsome, he was the most vocal person in any gathering, he wanted to be around him, he had kind of an electric magnetism, almost like a '50s Hollywood movie star. When we started to work with Lee on that, what Lee has is he's the coolest dude in the room. Lee's kind of effortlessly graceful. So it was a no-brainer to put those two actors in those two roles. We also knew with somebody like Judy, that we needed somebody to anchor the female part. In terms of, not just playing, the dutiful wife and all that stuff, but actually, a really strong character. A sexy, boss-talking, very, very vibrant and partner to Hoffman, who is the only saving grace Hoffman has basically. His love for his wife is his saving Grace. So with Judy, we needed someone who could play humor, who could play wit, but who could also play straight-forward drama, and she's one of those actresses. 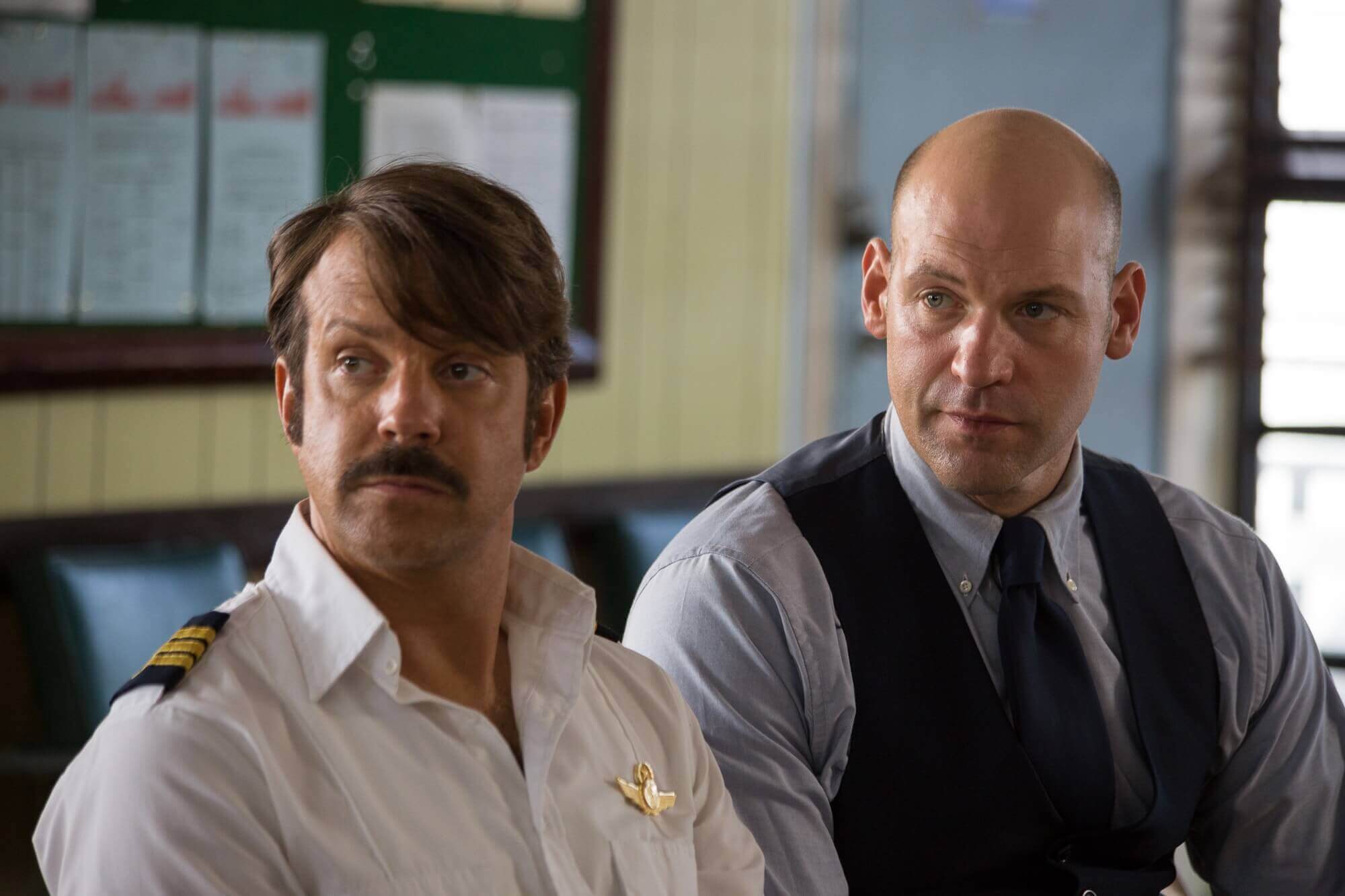 There are many funny moments in Driven due to the dynamic of the skilled cast of actors which are well equipped to shift from the dramatic moments to tension-releasing moments of bits and banter - the disarming nature of Sudeikis, the charming demeanor of Greer, and the hilarious punchy delivery of Stoll. What were your favorite scenes to shoot, and what was the filming process like during production?

So, some of the favorite scenes were the fun scenes were with Jason and Corey Stoll, who plays the FBI, who's Jason's working for. Partly because that character absolutely hated Hoffman's character, so Corey's sense of comedy was always very well played because you could always sense all the time that he really didn't like sitting with this guy. He thought this guy was absolutely a low-leveled loser. And the irritation he felt with him just made us all laugh a lot, and Jason played into that. The heavier scenes to film were the relationship scenes between Judy and Hoffman. One of the best scenes that I think in the movie is when she discovers that he's been working for the FBI as an informant, he's wearing a wire. And even in that moment, he's lying to her. Even in that moment, he's pretending stuff that doesn't happen. When she caught him wearing a wire and then you juxtapose that, the comedy of that, with the humor of that scene, with the reality of it. I've always believed in these moments where you don't need to hit the head with a hammer. You don't need to whack them to feel emotion. You can play the scene, for the wit and the humor of the scene, and let the emotions sit under these things. So for me, those were the two elements, the bank scene when they met together, I think it's fantastic. And I think one of the other scenes, the big scene when we recreated when he touched the cocaine. Now to us, that was one of the biggest scenes in the movie because he must've known at that moment when they were pushing him to touch it, that he was commissioning some form of economic and personal suicide. 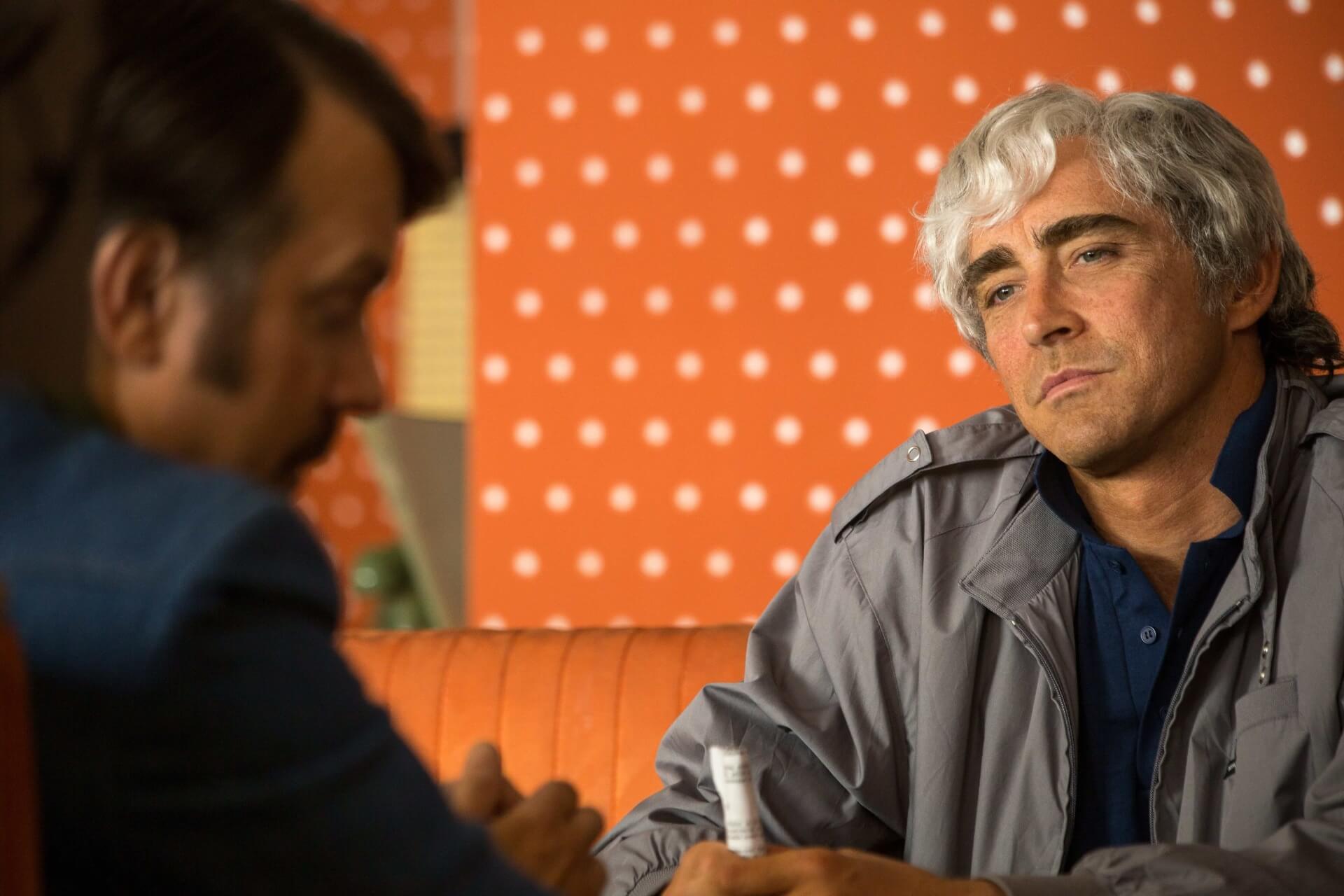 Driven does a fantastic job of grounding outrageous events into a more accessible territory - the warm yet odd budding friendship between Hoffman/DeLorean, the love between Hoffman and his wife Ellen and the unfettered hubris of DeLorean are only a few examples of when Driven highlights relatable character motivations and moral dilemmas. What was your process with bringing the Driven screenplay (written by Colin Bateman) to the big screen?

So, we spent a long time researching it and what the process is with Colin and he goes away and just writes for a while, and we meet again, and after we got a rough first draft, we look and it and we go, what's the character that's most funny, most illuminating? Something that we discovered through the research and through the work. We were never planning to do this biopic. The biopic to us is a very boring approach to telling the story. In many respects, it was like, okay because also it reflects you as a dramatist and as a filmmaker. If you're going to do a biopic, then you can't tell a lie. You can't say suddenly this person did this if they didn't do it. You know, but if you're doing a kind of warped biopic through the unreliable eyes of a narrator, then you can play with incidents and you can play with reality. So that's what we did, we took the character of Hoffman and we viewed through the DeLorean, through the lens of this character through his perception, through his POV of what was going on, his needs, his desires. You're following his story, as a low-leveled informant. He wasn't even actually into DeLorean in the beginning, but it became interesting when he realized he could save his own flesh. So I think that [with] the discovery and the process of writing, you never know going into it, this was a buddy-movie structure, the relationship between the two of them, and then playing and imagining the scenes where they happened around the real scenes that everyone knows from YouTube, the coke scene and the rest of it. So mixing reality and fiction was huge amounts of fun. You could imagine what took them to these places and that for a filmmaker is the best way. 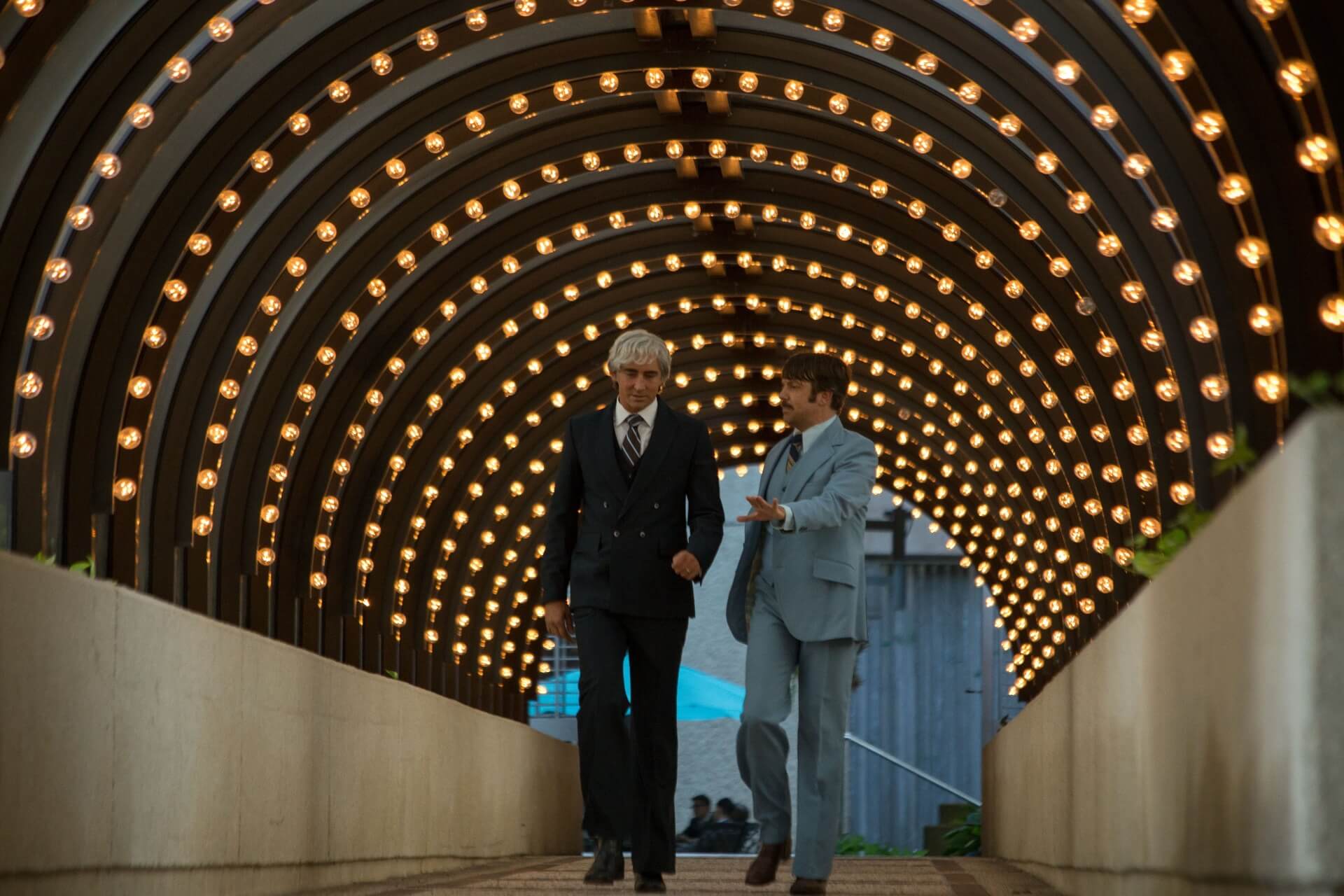 How was your experience working with cinematographer Karl Walter Lindenlaub to create the look of the film and how much influence did the period, the film was set in play?

That's probably one of the reasons we went to Puerto Rico. If you're recreating late '70s California, Southern California, one of the places you could do that architecturally is at Puerto Rico because it exists down there. Secondly, if you use those houses and the architecture, and then you put, very simply, the costumes of the periods and the design of the period up there. And we didn't over-stylize it, we didn't push it in the story. We got the photography, almost quite simple in a way, but quite classical. In many respects, the movie follows the structure of an old-fashion '70s picture. You know, it's character-based, it has a beginning, middle, and an end, and we didn't try and be tricky with the camera. We didn't try and pretend something. We didn't try to boost the story because we knew we had a great story. We just tried to film the scenes in a realistic and kind of energetic way that an audience would really get into.

What's the best piece of filmmaking advice you've ever received?

Colin and I are doing the story of the meeting between Malcolm X and Fidel Castro in New York in 1960.

Watch Driven in theaters and on digital/demand on August 16, 2019.