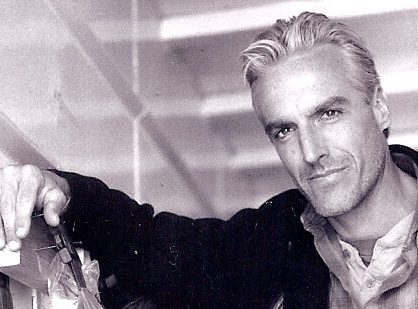 Duff McKagan might be best known as the original bassist for the legendary hard rock group Guns ‘n’ Roses but most might be unaware of his early beginnings in the punk scene in the 80s, or his terrifying alcohol-related brush with death. In his debut documentary feature film, Director Christopher Duddy explores these stories and more and gets to the heart of who Duff McKagan truly is, both as an artist and a person. In this interview, Duddy expands on his relationship with Duff and where he grabs his inspiration.

I caught the movie bug very young. Growing up in Dallas TX, in the summers my mom would drop my brothers and sisters and I off at the matinee and we would be there all day watching 3 or 4 movies at a time. Watching all those films was really a big influence on me and it affected me to a point where eventually when my dad was transferred and we moved to Los Angeles. I started seeing  all the movie crews and the trucks shooting around the city and I just wanted to get in there and see how they were doing it. Then in the late 70’s as a teenager all these amazing movies were coming out with big special effects from filmmakers like Spielberg and Lucas, Coppola, Scorsese and Ridley Scott and the summer Blockbusters were born. That inspired me in a profound way. I majored in photography in college and was making short films with some friends and I was trying to figure out how to get into the film industry. Since I was the first generation in my family it proved to be difficult. I guess I was persistent because that was all I was thinking about doing for a career and finally I had a friend that worked at ILM, George Lucas’ visual effects company, and he called me one day and said they had an entry level opening in the camera dept. I lunged at the opportunity and really haven’t looked back since 1985. I have always been just a sponge for knowledge about filmmaking and have had the great fortune of working with the best in the business from there. I think my biggest mentor and who had the most influence on me is James Cameron. I have worked my way up on 5 of his movies and he taught me alot! Then the ultimate goal of making my own movies is where I’m at now. I feel like I finally have all this knowledge and experience to now be able to tell my own stories.

How did you first hear about Duff McKagen and what drew you to him as a person and musician?

I met Duff walking our kids to school. We lived on the same block and our kids went to the same school and I would see him almost every day for a while and we became friends. We had a lot in common with fathering 2 girls who were near the same age, Duff and I are the same age and we both love NFL football. We were friends for about 5 years before he wrote his book. He handed me a copy one day and asked me to read it. I was blown away by his book. It struck a cord with me because of what a great story he has and where he came from and how he got to where he is today, so I approached him to make a documentary based on his book and life. He has such a classic rags to riches inspirational story and as a filmmaker, you look for these kinds of stories to tell. He was hesitant at first but when the book came out as a New York Best Seller he warmed up to the idea as long as it was not a fluffy self-indulgent piece. So I started shooting B-roll of him on the book press junket and then he asked me to go with him to Cleveland for the GNR Rock and Roll Hall of Fame induction. I went a day early because Duff was doing a book reading show at the House of Blues and he wanted me to shoot some of the show and the guys (Slash, Steven, Matt and Gilby and Slash’s singer Myles Kennedy) were coming after to rehearse for the Hall of Fame show. This book reading show is something I had never seen before. It was just fucking cool. Duff reads passages from the book while his band Loaded scores his spoken word with a soundtrack vibe but playing all these iconic GNR and Velvet Revolver songs with a steel slide guitar. It was really dramatic and the sold out audience went crazy for it.  So when we got back to LA I pitched Duff on the idea of using this book reading show in the movie as the device that drives the storytelling for the documentary and we should stage and shoot a bigger more orchestrated show for the movie. So we did and Duff got a string quartet and more guitars and of course we had to shoot at the iconic Moore Theatre in Seattle . So it became sort of this hybrid concert movie/documentary film because early on in the process Duff and I had many discussions about how to make this movie different and unorthodox and an uplift for people to be inspired by with this iconic music being played live in this classic way.

The film is full of interviews with Duff’s closest friends and family, was there anyone, in particular, you wanted to interview but weren’t able to?

On every documentary, you have a wish list of hopefuls to interview and then once the narrative of the film finds itself then the movie dictates who actually ends up on the screen. Of course, I had an extensive wish list at the beginning but the stories picked who we interviewed and were relevant to the movie.

What was the most difficult aspect of making the film?

Every film is a great challenge to complete especially on an independent level and documentaries take a long time to bake. We were working on this movie for 4 years and it was full of trials and tribulations.  We had a lawsuit with one of the producers and Duff was in like 4 bands and was constantly going on tour and we would shut down for a month at a time.  So after this long hard  journey with so much adversity and having an experience, not unlike bare knuckle fighting, there is a silver lining and that is we made a really good movie here. I’m really proud of this movie that it is an uplifting visual and emotional journey for the human spirit. An inspirational story with great music.

Were there any interesting stories about Duff you wanted to share but had to cut?

Yes of course but we were contractually limited to a certain time length for distribution on a documentary like this. We had a fiscal responsibility with that. Shit, with all of Duff’s adventures we could have made it a 10-hour piece. Ya know, that’s the tricky part about telling someone’s life in this medium. You are pulling the curtain back on a person and most people only want to shine a light on their good stuff but Duff was adamant about showing the dark stuff too, a lot of dark shit.

What are your biggest influences, film or otherwise?

I think I kind of answered this with the first question, but I would add that people who have overcome adversity with true success and accomplishment and are an inspiration to other people influence me. Not only in great filmmakers but any human that conquers their own demons and takes risks and have great passion and compassion for what they do. I’m talking about anybody. Scientists, athletes, musicians, artists, writers, teachers, anybody that just has a burning desire to accomplish their dreams no matter what anyone says. People who get way more No's than Yes’ but keep forging ahead and never quit.

I would love to do one of the big sci-fi franchises, any of them, you pick!

I am developing another music documentary with my brother about the Porcaro brothers from the band Toto called “Porcaro, A Band of Brothers”. I can’t talk too much about it yet, but it should prove to have many great interviews with famous musicians who they collaborated with for the last 30 years.

I am shooting as the Director of Photography a remake of the classic horror film “Nosferatu” which is a really cool project. We shot all on green screen and compositing into the original movie which is a very unique approach. I’m getting to do Cinema 4D work for the first time with lighting and camera moves in the computer. Very exciting time to be a filmmaker with all the  tools of technology we get to use now.

Then early next year I’m off to shoot a family adventure film in Thailand with my wife Joely Fisher who is directing.  The movie is called “Oliver Storm and Curse of Sinbad’s Treasure.” Stay tuned for this one, it’s going to be an epic journey.

It's So Easy and Other Lies is out now via VOD and iTunes.