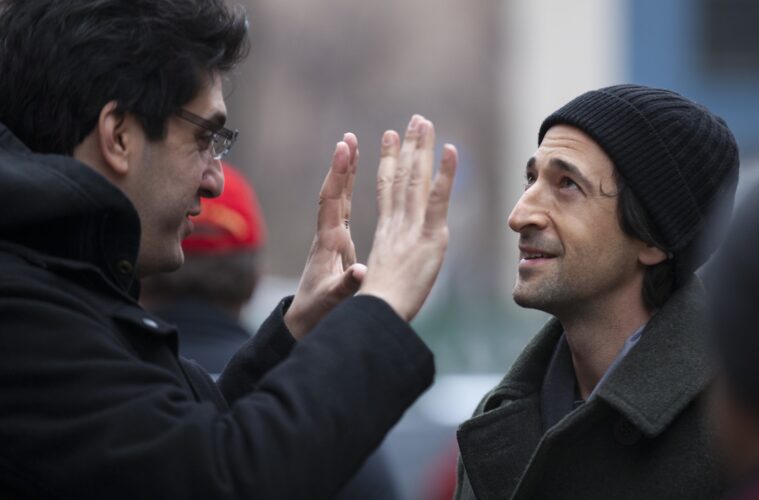 From the book ‘Manhattan Nocturne’ by Colin Harrison, Lionsgate Premier brings us a sordid story about manipulation, lust, and power amongst the elite of America’s metropolis.

One of the wonderful things about noir fiction is that it straddles the seedy underbelly & polished glamor of any big city (though New York is best).The characters - regardless of background – are lethal. Through word, deed or intent, sex and death are what they use to get what they want.  In Manhattan Night, an on-form Adrien Brody is the reluctant antihero that guides us through an edgy high-society crime mystery that is both well-paced and full of solid performances.

Directed by industry veteran Brian DeCubellis, Brody plays failing crime journalist Porter Wren. With a career derived from an incident of accidental heroism, Porter is struggling to keep his column in print as the whole world goes digital. Though Porter’s family live in relative safety, his work has left him protective and soberly misanthropic. He is a watcher; his livelihood dependent on capturing the aftermath of horrific crimes and gleaning quotes from distraught families. He is forced to act only when his stress, boredom, and broken moral compass lead him straight to arms of the beautiful Caroline (Yvonne Strahovski).

Porter gets caught up in spousal infidelity, celebrity murder & blackmail. Seemingly being used by opposing sides who both threaten and seduce him to get what they want, the dogged reporter must find a way to appease both sides if his family and his career are to survive.

I was able to catch up with the Director to talk about Manhattan Night, working with big names, and what’s next for him.

Firstly, congratulations on the film! I understand both yourself and Adrien Brody produced it. How did it come about and how long was it in preproduction?

To go to the beginning, I read the novel Manhattan Nocturne by Colin Harrison in 1999 and knew I wanted to make it into a movie.  I obtained the option in the fall of 2003 and wrote the screenplay adaptation very quickly after that.  The movie almost went into production in 2008 but didn't and it was back to the drawing board.  Campbell Scott and Jennifer Beals had been attached since the beginning and in 2013 the project took a big step forward when Adrien Brody came on board.  Yvonne Strahovski followed shortly thereafter.  By the next year, Adrien was in the process of setting up his production company Fable House and we agreed that Adrien should be a producer along with myself because he was passionate about the project and began to raise funding in China.  At the same time back in New York where I was, our third producer Steve Klinsky came on board bringing funding from his newly formed production company Untravelled Worlds.  So in May of 2014, we knew we were a go and scheduled production for December and January when we had a window with all of the cast available.

You have had quite a varied career so far, and now you have just completed your first major feature film. What are your cinematic influences?

Well, I have a lot of influences and had a lot of inspiration on this film in particular.  This film has a lead character who anachronistic as a newspaper investigative reporter who writes a column, and the whole movie has a throwback feeling as we are in his POV a lot.  So it was fun to be inspired by Vertigo, and Body Heat, Third Man, Maltese Falcon, Double Indemnity, Fatal Attraction even Rosemary's Baby.  Some people have gotten a Brian DePalma vibe from it, but those films weren't in the ones we were looking at actually.

When watching ‘Manhattan Night’, I was reminded so many times about classic film noir. Did you choose to add things like Brody’s voice over as a nod to those types of movies?

Yes, the VO was a very deliberate choice as a nod to that, but also, the novel Manhattan Nocturne is in the first person and it was a great way to bring some of the prose in as well as giving a voice to what Porter's column would sound like.  It worked on all those levels and in addition Adrien Brody has one of the best voices for VO and it allowed us to benefit from that on top.

The book from which the film is adapted came out in 1996. Other than updating some references, how much did you change about the original story when writing the script for the film?

There are a number of changes that are significant and more that are smaller and not so significant, but I really looked to preserve as much of the book as I could because I loved it so much.  Much of the difference is just a pure omission of B plots that just didn't fit into the running time of a movie.  The basic skeleton of the book and movie are very similar.

Working in TV, commercials and music videos requires succinct direction given the shortage of time. Do you feel this helped you tell such a layered story so well?

I think so.  I think it helps you measure the time more as well and choose when you want to spend more time in a scene and when you don't.  There's a certain fun in the discipline of storytelling in a 30-second spot, and there's also a pleasure in working in real time with actors who can mesmerize when given time and space to create.   This story is both complex from a narrative perspective but is also much more character driven than the average mystery / suspense, I think.  So being economical in some ways allowed me to add time to character moments and blend those things together.

Well, they are total pros with decades of experience each.  It was like driving a very fast race car that could go as fast as you want and make any turn you could want.  There's no limit to what these guys could do and that for a director is just an awesome space to play in.  Everyone in the cast deserves a lot of credit as top actors in their craft and all contributed so many good ideas.  It was a dream cast to work with and I loved every second of it.

With a cast like that, did you allow encourage improvisation given the complexity of the story?

There wasn't really too much improvisation overall, with the exception of the Simon flashback scenes between Yvonne Strahovski and Campbell Scott.  Because they were shot on go-pros and were "found" moments, we wanted a looser style, so for many of those we would just set the frame and discuss what the goal of the scene was and we'd do a bunch of takes where they would try different ways of doing it and improvised some dialogue or blocking and kind of just messed around with it.

Manhattan Night features some morally questionable characters. Your previous short ‘The Worst Thing I’ve Ever Done’ also explored morality. When writing or directing fiction, are you drawn to the darker stories?

"The Worst Thing I've Ever Done" was written and made with Manhattan Night in mind in so far as exploring those themes and playing with some cinematography and music and such that might be useful on MN.  It was a totally different plot than MN, but it did provide a chance to experiment in a practice kind of way prior to the feature.  In general, I'm drawn to characters of complexity who are like people we know, that is not all good or all bad but struggling with their own personal limitations, challenges, and demons.

As well as being released theatrically, Manhattan Night will be released via streaming services and video on demand. What are your thoughts on this new way people enjoy movies and TV?

With multiplatform releases like this one you really get the best of both worlds so far as people can see the movie in theaters in select cities, which as a filmmaker is satisfying to have an audience with the big screen and big sound, but also with it being simultaneously On Demand, it means anybody can see it.  While I prefer the theatrical experience for this movie, you can't deny that the amount of access people have to it On Demand, and iTunes is really remarkable and counters the limited release issue successfully.  Plus at home, you can watch at night in the dark in your pj's with your favorite drink and leftover meatloaf and be as comfortable as you can possibly be.

If you had an unlimited budget and resources, what film would you make?

I would make a Sci-Fi / Time travel around the world kind of movie that would be very Terry Gilliam inspired.

Immediately, I'm enjoying the launch of Manhattan Night this weekend (past tense) attending screenings in Times Square, also doing a special screening with Q&A and reception at the Ridgefield Independent Films festival (tickets available at riff.website, and another special screening in my childhood hometown in RI. Bigger picture, I'm considering a number of features at the moment but not able to say what they are.

Manhattan Night is out now