Road to the Well – Interview with Film Director Jon Cvack 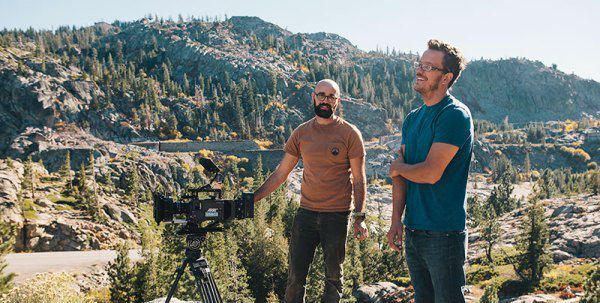 In Road to the Well, two recently reunited friends find their lives further upended after one witnesses a brutal and mysterious murder. Jon Cvack, writing and directing his first feature after a successful Kickstarter campaign, took some time to reflect on his movie’s complicated tone, structure, and politics.

There’s isn’t really any dialogue in the movie until about three minutes in. The opening sequence is sort of esoteric, dreamy, and I love that we open on Jack before we move to Frank, our real protagonist. Tell me a bit about that decision and what the first few minutes of the movie mean to you.
There are two answers I can give to this question. One is the perhaps more interesting idea that Jack was introducing us to a world where Frank would eventually end up, coming near full circle by the end. The other is that, in this day and age, there was no way I could start with a long, slow take at an office and then carry on a slow first act and expect any screeners to complete the film on the festival circuit. There needed to be a question that would leave people with an itch they couldn't scratch throughout the story, especially as more details began to pile onto the initial question. Opening on Jack was a way to buy some extra patience from the audience, with a hope that they wouldn’t assume they had it all figured.

The movie never totally embraces comedy, but there are moments that maybe do. I loved Frank’s physicality in the scene by the car, just after the body’s discovered, when he steps toward Jack. “So we just take a dead body all the way fucking up there.” How were you thinking about the tone of the film? Did you ever consider heightening the comedy?
All of the filmmakers and storytellers I admire have found a way in which to balance comedy with the dramatic – Paul Thomas Anderson, Scorsese, John Steinbeck, David Foster Wallace – with so few capable of pulling off a straight dramatic story, as it often drifts to melodrama as a result. And it's often because dramedy is much closer to reality than otherwise. If Tim Davis (the DP)[Pictured left in the image above] and I were to ever get into a similar situation as Jack and Frank, I’m sure amidst the terror there would still be a few jokes between us. That’s just how the great friendships are – capable of offering a laugh and providing relief as a result, no matter the situation.

I’m not sure Jack believed or cared about what he says or how he interacts with anyone, or that he was playing the role of what he believed a good friend would be, breaking up the moments for Frank who saw little humor in the situation. At the same time, I didn’t want to celebrate the extremity of the situation. To locate the balance was an overwhelming challenge, especially for a micro-budget picture, but it was finding actors like Laurence and Micah who were able to identify exactly what we were looking for in the characters that made it all possible.

The atmosphere of the movie is relentless. There’s danger in the air of this world, and Frank and Jack aren’t completely outside of it. They’re part of it. How did this influence how you aligned yourself with your protagonists as you wrote and directed the film?
I remember hearing about how sadistic a good screenplay is – as what makes a great story is often placing interesting characters up against extraordinarily difficult circumstances. I think of The Edge, Cast Away, or The Revenant and how they serve as a more literal interpretation of the idea, but other films such as Boogie Nights, Goodfellas, or No Country for Old Men, both honoring the idea and partially flipping the strategy, containing characters who do terrible things to other people.

Regarding Road to the Well, this isn’t a film about good or redeeming people. All of the characters are driven by various degrees of self-seeking pursuits and it was the idea of exploring two best friends up against that world that I felt was exciting, especially when one was betraying the other. Jack is someone who has allowed the world to completely destroy him, while Frank is right on the precipice, capable of living a more humble life, allowing the corruption to take over him as it did his friend, or fight against it altogether. The deeper they got into their journey the more the world would beat them down.

The scene in the army vet’s cabin reminded me of the bar scene in Inglorious Basterds. The tension was overwhelming. What other movies did you find yourself thinking about while making Road to the Well?
Our DP Tim David and I lived with each other during the making of the movie and we poured every ounce of our cinephilia into the project. Everything from There Will Be Blood to Jaws to Sideways to McCabe and Mrs. Miller to Dumb and Dumber and Black Sheep played a role in the story and its style.

One thing I’ve grown to appreciate in films since making Road to the Well are complex set pieces and elaborate scenes, knowing how much it must have cost. The idea of Paul Thomas Anderson getting to build an actual oil rig in Texas and then set it on fire has allowed the magic of film to shift. While I now have decent understandings of how the sausage is made, the magic has become that any of these films exist at all, that filmmakers are entrusted with all of this money to create visual images that have often gone on to live within our culture. I still think the U.S.S. Indianapolis scene from Jaws is the greatest scene of all time – and likely influenced the cabin scene beyond any other movie. The idea of three characters sitting around, talking around a subject, right before the big moment arrives – it doesn’t get any better. Regarding Inglorious Bastards, I've actually only seen the movie once, so as much as I appreciate the comparison, it wasn't a specific influence. I actually grabbed more from True Romance than anything else of Tarantino's.

The movie’s pretty political. Was this a conscious decision? Is it just a consequence of where your head was at during the writing process?
It was deliberate in the sense that I think politics has become a more ubiquitous subject with the rise of social media. No matter what you use the service for, users are going to see the updates being shared and what’s going on around them, making it very difficult to escape the noise. One of the earliest details I imagined about Dale was his exhaustion from all the hyper-connectivity and how he believed it was only by escaping to the middle of nowhere that he could escape it; where he gets to determine when information is provided to him and what that information is.

There was no determination to make some grand declaration about one view or another, so much as to explore the rapid descent of modern politics and what it could mean. Some people completely tune it out and others are wired in and as cynical as ever. I can’t really add anything to the conversation about the dangers of echo chambers and partisanship that John Stewart, David Axelrod, and others pundits haven’t already said, and I’m also not really sure how you resolve the problem. Indefinite, 24/7 connectivity isn’t going anywhere and so I don’t see how the dialogue can improve without more arduous filtering by Google, Facebook, and others for identifying the real from fake (which poses its own problems). Bleeding headlines will always be more easily consumed than complex ideas and until that shifts, it’s going to be a problem. It makes me wonder if perhaps Frank might have returned to the woods after the journey...

If you had infinite resources and budget, what’s a fantasy project you’d like to tackle?
Well speaking of the above, I’ve been thinking about a series that explores the rise of another American Civil War. Not just some action/shoot-em-up, but examining ideas of hyper-partisanship and what it could mean if it grows worse. There are a few great PBS documentaries exploring domestic anti-government extremism – Ruby Ridge, Oklahoma City, and American Patriot – and while there is an ebb and flow to the problem, we're presently experiencing a significant uptick and a lot of that is attributed to hyper-partisanship. If both sides of the aisle could convince the people that the other is out to take away their rights or hurt them, it seems like a great opportunity to examine some interesting characters and ideas, exploring extremism on both sides. But I also just thought of this about a month ago, so I might think it’s a terrible idea soon.

What’s next for you?
I’ve finished up what I hope to be the next script and we’ve begun the financing hunt. I can’t say much other than that it’s a chamber drama-political thriller and I couldn’t be more excited. I’ve become anxious to take all I learned with Road to the Well and apply it to the second film. Hopefully, more updates will come soon.

Watch Road to the Well on iTunes