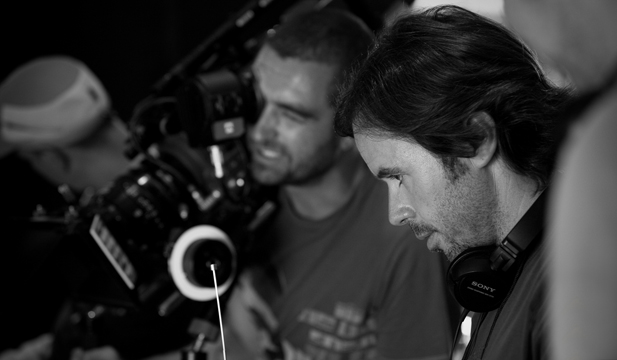 For more than 18 years, Fernando Lebrijia has worked in features in television as a producer of numerous television shows and director of music videos and national commercials.

His first feature film Amar a Morir ('Love until Death') has been screened at numerous film festivals in major cities such as New York, Chicago, and Los Angeles. In 2010, in addition being nominated for seven awards, he won the Best New Director at the Mexican Golden Globes for his work.

His latest film, Sundown, is a teen comedy about two high school students who venture to Puerto Vallarta, Mexico for spring break and everything that can go wrong manages to wrong. We spoke with Fernando Lebrija and asked him a few questions about his latest work, which opened in limited release May 13, 2016.

How was the process of making Sundown, your first English language film, different that your previous Spanish language work?

Mostly the difference was the genre, making a comedy is very different than making a drama, the language was not a problem. I think a comedy was a little more difficult for me because is a difficult genre, and took me out of my comfort zone.  I like to challenge and take risks, that is why I took Sundown. Plus I want to direct a movie for the world, so making movies in English helps. I’ve been living in Los Angeles for a long time, so my English is good enough to direct English speaking actors.

Who is your biggest inspiration as a filmmaker?

I have a few inspirations, but the first one is when you are in a movie theatre watching a great movie, you get this feeling in your stomach and your heart so strong, then that was my inspiration to become a filmmaker in the first place. Inspirations I have many, like when I saw Ben-Hur for the first time wow! Men can do those type of films or Once Upon a Time in the West, or when I see my fellow Mexican filmmakers and what they have achieved with their work (Del Toro, Cuaron, Iñarritu and Lubeski), or when my father and I used to choose what movie we were going to see together, he was a great moviegoer and partner. Or when I see my mom on the set of my movies, no matter if is a night shoot, or if is 150 digress, she is always there supporting me. She is my inspiration.

You have some really great actors in this, Devin Werkheiser, Teri Hatcher, John Michael Higgins, Jordi Molla…Describe what the casting process was like for this film.

I had great casting directors: Annie McCarthy and Kellie Roy. We had a great work experience with them. The main actors came out from those long casting sessions. Camila, Teri and John Michael, were cast through their agencies and Annie and Kellie, the three of them jump into the project almost last minute.  The Mexican actors I know them or worked with them before, that was more of a phone call. And Jordi Molla with who I wanted to work with, a mutual friend put us in contact, we connected pretty well since our first Skype call. So it was the casting process, relationships and luck I guess.

What made you choose Devon for the lead, Logan?

He was perfect for the part, he had the charisma I was looking for, but also the innocence the character needed. Plus, he is a musician as well and knew the music world I was going to put him into. He knew how to be on a stage making music and in front of a big crowd. Plus he connected really well with Sean Marquette, their chemistry was perfect and very important for the film and their characters.   He's a great actor to work with, he is professional, passionate, committed, hungry, he supports you as a director, hard worker, easy going and talented. What else can you ask for in an actor!

Sundown is a coming of age story about two high school students adventures in Mexico, which is drastically different from your last film, Amar a morir, which is more of a classic love story. What inspired the change?

I wanted a challenge, and a comedy was one. I don’t want people to see me as the drama/romantic director only, I want to direct a few different genres. Also, the distributor made me the offer of a comedy and I took the risk on doing one. Also shooting the movie in a great location like Puerto Vallarta was awesome, the government support the project since it was in development and that make things easier. All the dots were connecting well so I said, “let’s do this raunchy comedy”. Plus I wanted to show this time a more fun Mexico, not the violent Mexico like the one we only see on the news.

Most of Sundown takes place in Puerto Vallarta, and it showcases a lot of cultures that we have not seen in other films, such as the chicken fight and nightclub scenes. What is important for you to show the audience a non-glamorized version of the country?

I think the purpose was to show everything from Puerto Vallarta. The Non-glamorized part, also the glamorized part, the beautiful part, and the fun part. We showed what people wants to see that makes you want to go to a destination. The magic places but also the little more rough and underground areas. The combination of that, in my opinion, is what makes you want to go to places. The mellow, the beauty, but also the hectic, red zones, etc. All that combine will show you that the city is alive and that will make you want to go! Like when I saw The Beach or Hangover 2, I wanted to go to Thailand, and I did, but if you show me just the beauty places of the destination, I will not be that interested in going, I like the adventure, and that is why I decided to show all that Puerto Vallarta has to offer, not just the touristic and pretty attractions.

EDM is a huge part of the film’s storyline, and you even feature cameos from Paul Oakenfold and Steve Aoki, are you a fan of the genre?

I’ve been a fan of Electronic music since I remember, I’m a big fan of house music, deep house, trance, nu disco. Not so much of EDM, but I like to hear it when I’m partying in the clubs, I think the beat is perfect for clubs, the beat Hip-Hop or Pop doesn’t have, so in clubs hearing pop and hip-hop was boring for me, but now with EDM or that beat is a different ball game of emotions, also a matter of taste I guess. I went to raves when I was younger, when the DJ’s were more underground and no so commercial like now. So, yes I’m a big fan of the beat!

If you had an unlimited budget and resources, what film would you make?

I have a few in mind already, which I’m keeping until I’m ready to make them and get those resources. One is about the Conquest in Mexico by the Spaniards. The other one has to do with the history of drug trafficking.  Also,  the clash of heaven and hell, when Armageddon happens.

What are your plans for your next film?

Keep practicing my craft and taking risks, to be ready when those dream projects come. At this moment, I’m attached to direct a film with producers Mark Ordesky and Jane Fleming, a teen romantic drama comedy, in the vein of the John Hughes movies. I’m  also developing a road trip drama myself with my partners called Riding to the Light.

Sundown is out now