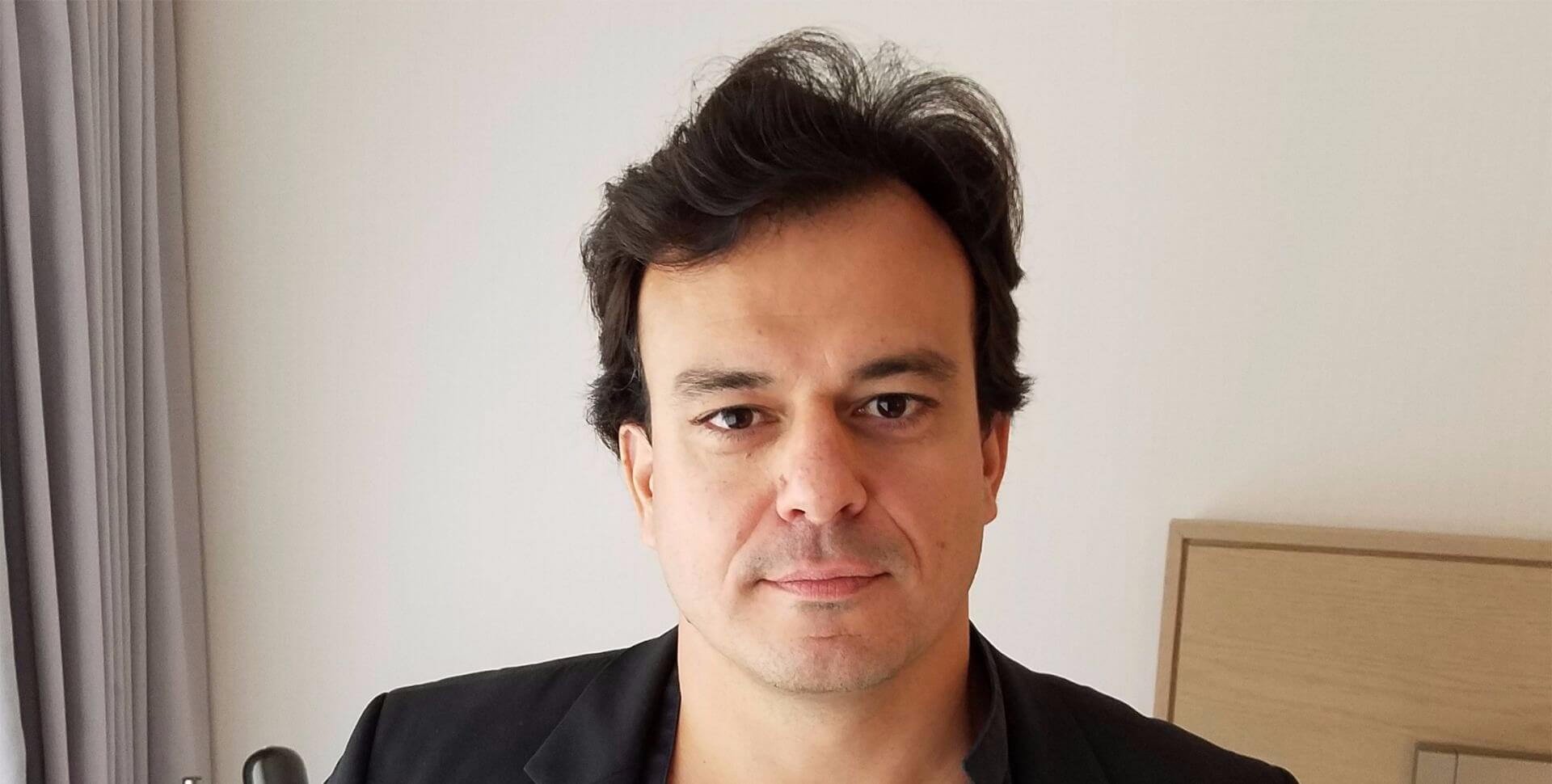 Spanish director Juan Carlos Medina’s latest feature film The Limehouse Golem [2016] is a suspenseful mystery that focuses on a detective bent on solving the case of an unknown murderer reigning terror upon a Victorian England town. The Limehouse Golem is only Medina’s third credit as a director, but his talent for the art form is evident. Borrowing Tape got the chance to interview Medina about his gothic thriller and his identity as a director.

The Limehouse Golem is based on the novel Dan Leno and the Limehouse Golem by Peter Ackroyd. What was the process like adapting the story in cinematic form?
Literary form and film form are quite different, so I think in the case of a literary adaptation, each book has to be approached differently.  It’s about understanding what makes the soul, the essence, the ambition of the book and being faithful to that.  The Trial of Elizabeth Cree by Peter Ackroyd is mostly in the shape of a fascinating journal, the chronicle of the Golem’s journeys and observations through the dark underbelly of the city’s most run-down, working class and industrial areas. It’s a sharp and merciless commentary on the social violence, the stark reality of millions of humans who live and die anonymously on those streets, on a daily basis. This is the book that Kildare and Flood find written in the pages of the DeQuincey in the British Library, so we used the very raw text of Peter’s book to create that prop.  Jane Goldman adapted the book brilliantly by shaping up the murder mystery into that chronicle, giving more emphasis to Kildare’s character, and to the police side of the story. It was fascinating to recreate that world of Scotland Yards in the 19th century when it was a police force whose mission was really to pacify socialists and to keep the unruly working classes away from the higher class neighborhoods. Of course, their primary mission was not to catch serial killers, they didn’t even know what that was.

Since the film is set in the 1800s, was any research required to get the costuming and dialogue as accurate as possible?
There was a ton of research involved in creating this film. We started really early with my production designer, Grant Montgomery, and we based our world creation in Peter Ackroyd’s book of course, but also in some very interesting artists of the time. Grimshaw, Blake, John Martin, Gustave Dore, Piranesi. But also the descriptions of London by Dostoievski, Verlaine, Carlyle.  Also, there was a lot of work into the re-creation of the music hall tunes. We actually found Dan Leno’s authentic songs,  Johan Soderqvist composed the music and we found an exceptional bunch of musicians in London who are specialized in that type of music. There are very few of them! We recorded all the music-hall score in London at a special location, for the sound to really sound perfect like you would have listened to it in Dan Leno’s genuine music hall. The lyrics and all, that’s authentic Dan Leno. We also researched a lot with Claire Anderson, the costume designer, and we discussed a lot based on references from paintings of the time, but also great films like Jane Campion’s Portrait of A Lady. Claire created all the costumes from zero, they all have a strong personality fitting each of the characters. She did a fantastic job.

The production design in The Limehouse Golem is dark yet elegant. What were some of your influences in finding the perfect “look” for the film?
As said before, lots of influences from painting, engraving, and literature. We were more interesting in creating a subjective “nightmarish” vision of London, so I wanted to stay clear of photographs, I wanted to get inspiration from painters and writers, to get that sense of mood, an emotional, subjective feeling of the city, which I felt was closer to what Peter Ackroyd does to your mind when you’re reading the book.

In addition to the more violent scenes, there are a few musical performances in the movie. What was it like planning out the theatre acts that took place in the music hall?
It was really a creation in itself! We really tried to be faithful to what you would have seen in Dan Leno’s music hall at that time. As mentioned earlier, the songs are really his, re-arranged, but the lyrics are Dan Leno’s. Dan Leno would cross-dress like that, exactly, and the whole theme of the violence against women, the lost innocence and the jokes about sexuality as a theme of  music hall “comedy” that is, when you watch you wonder is he trying to denounce that violence, or is he morbidly exploiting it for his spectacle. I think all that is shocking for us today, but it’s genuine from that time. We didn’t invent anything. Those plays and spectacles are an incredible psychological portrait of an era…they say a lot about those times. The diseased masculinity that would culminate in the 2 world wars. Just as a The Bluebeard play, it was a classic of that era, they were obsessed by it. All the theatre part is very important in The Limehouse Golem, as it mirrors the story. In the street and vice versa, they generate each other. That’s why the theme of the mirror is central In the film. I used a lot of mirrors to convey that idea.

What aspect of The Limehouse Golem are you personally most proud of completing?
The whole film was a mad challenge. It was such a difficult film to make, and so traumatic in its making. So I’m very proud of it, and the courage, talent, and resilience of everyone involved. Very proud of Jane Goldman, who is a genius writer and such a sweet, smart person. Very proud of Stephen Woolley who fought relentlessly like a lion to make this film a reality, and very proud of all my cast, who were so wonderful who gave life to these wonderful characters.

What was the most challenging part of filming the movie?
The storms who were constantly destroying and flooding our sets. We shot the film under the most awful weather in North Yorkshire in November.

In your opinion, what makes a horror film truly scary?
Horror is like laughter, it’s very personal. It changes from person to person. I don’t think two people are going to be scared by the same things. As far as I’m concerned, the thing that scares me the most is the possibility that the Devil exists. The scariest films I have ever seen were William Friedkin's The Exorcist, Na Hong-Jin’s The Wailing and also Scott Derrickson’s The Exorcism of Emily Rose. That film took away my sleep for 2 weeks.

What are some of your favorite horror films?
See previous answers, but I would also add The Ring, the Hideo Nakata original, but also Gore Verbinski’s remake. Alien, of course, I’m a huge fan. Kyoshi Kurosawa’s Kairo, Jacques Tourneur's The Night of the Demon.

If you could collaborate with anyone in the film industry, who would it be and why?
I love Joel Edgerton as an actor. Emily Blunt, Rooney Mara, Joaquin Phoenix, Isabelle Huppert. They’re all acting geniuses, but there are many more I’d love to work with!  As far as cinematographers are concerned I love Bradford Young and Natasha Braier.

What advice would you give to anyone who is interested in pursuing a career as a director?
Watch lots of great films. Talk about them with friends who love cinema, read great books about cinema, written by directors and film critics. Like Hitchcock, Truffaut, Peter Bogdanovich's Who The Devil Made It. Go to master classes. To hear great directors and great actors talk about their craft is the most important. To have a broad and wide culture, spanning through everything, music, photography, painting, literature, history.

If you had infinite resources and budget, what is a fantasy project you would like to tackle?
A great Lovecraft adaptation. I know Del Toro has been working on the Mountains of Madness for years so that is taken, but maybe something else! Like The Dunwich Horror.

What’s next for you?
I’m shooting the two first episodes of a TV show in Wales for SKY (based On Deborah Harkness’s books All Souls)  then I have several film projects and another TV show Project with Scott Free.

The Limehouse Golem will start showing in theaters
and on Video On Demand / Digital HD on September 8.

Watch The Limehouse Golem on iTunes