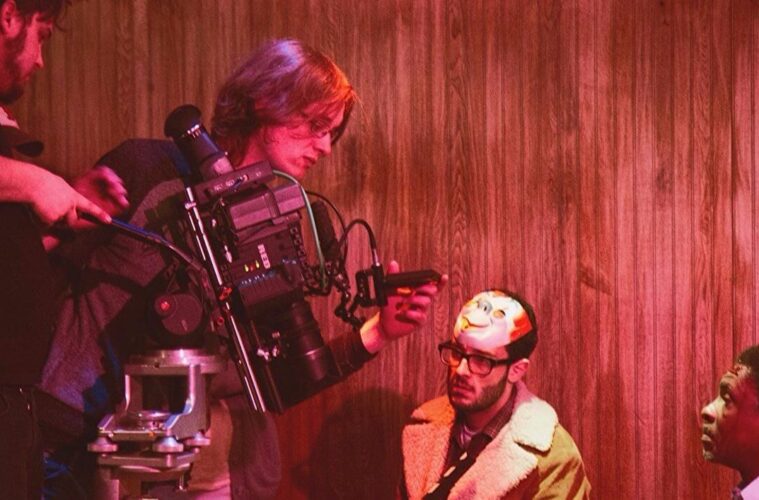 Nicholas Bushman's horror thriller Union Furnace [2015] centers on a small town con man who gets mixed up in a deadly game for the chance to win a large sum of money. Borrowing Tape got the chance to interview the director about his acclaimed second film and some of his cinematic influences.

In addition to being the setting of the film, Union Furnace is actually a real town in Ohio. Did growing up in that area influence the location you chose to shoot the movie?
Well, it’s the name of a real town in Ohio but that’s where the comparisons stop. We just thought it was the perfect title for our story. What you see in the film is actually a hodgepodge of different locations from all over the state that fit our needs in one way or another. At times it felt like we were filming everywhere in Ohio but the actual town of Union Furnace. And none of those places are anything like where Mike and I grew up, which was a pretty quaint town called Grandview Heights in Columbus, OH. So the inspiration for this movie came more from wondering what was going down on the other side of the tracks…You see these creepy double-wide trailers on the outskirts of the city and you just know nothing good is happening in there.

What brought about the concept of having a horror film about a bizarre game with high costs?
The concept was exciting to us both structurally and practically. I loved that each game could feel like a completely different movie every ten minutes - one game could be surprisingly funny, another surprisingly horrific - but with the stakes always getting higher each time. And it was also something that could be done at a single location and still inherently be very visual.

The cinematography of Union Furnace is very claustrophobic and unsettling. What was your technique in capturing this aesthetic?
The nice thing about a movie like this is that it demands you go a little crazy with the camera. But the trick then becomes not getting too carried away with the wildness of some of the situations you’re showing. Often times I would abandon a really cool, complicated shot in favor of something much more stripped down and simple - Just trapping those characters inside a single static frame would end up being infinitely more effective.

The ensemble of characters in the film is portrayed by skilled yet relatively unknown actors. How did you find the people you cast in Union Furnace?
Many of the roles were written specifically for these actors. Some of them had already been in our first film, “Sandbar”. Obviously, that goes for Mike but also Katie Keene and Kevin Crowley, who are two of the greatest people in the world to work with. Seth Hammond, who plays the Lion, is a dear friend who had worked behind the scenes on “Sandbar” and also had a small part as a bartender in that movie. He asked for a role where he actually got to talk this time and we more than accommodated him! It was so amazing once we started rehearsing to see just how incredible Seth was going to be in the role. I think he’s so clearly the heir apparent to those great wild and crazy actors of the 70’s - Nicholson, Hopper and De Niro all rolled up into one! We only knew Keith David from his movies but his role was also written just for him - Wonderful actor and a wonderful dude.

How was directing Union Furnace different from directing your first film, Sandbar [2012]?
“Sandbar” was definitely a more intimate affair. A lot of that movie was filmed in my great-grandmother’s house with only a couple of crew members and me shooting it all with a handheld camera. It was crazy but great! But on this one, it was nice to have a slightly more proper budget and crew - even if we had a lot less time to do it in…22 days to be exact.

What are some of your personal favorite horror films?
I love all of the Italian giallo movies from the 70’s deeply. There’s “Suspiria” of course and all of the amazing Argento films. Some of them are not just among my favorite horror movies, but my favorite movies period. Like “Inferno” which I actually prefer to “Suspiria”. Or Umberto Lenzi’s “Seven Blood-Stained Orchids”. “5 Dolls for an August Moon” and “A Bay of Blood” by Bava.

Those films all inspired me as much as anything to try my hand at something like this. I kept saying during the shoot that I wanted this film to be a “white trash giallo”. And I think the best Italian horror film of the 70’s is Pasolini’s “Salo” - Not technically a giallo per se, but good god is it something to behold. That’s certainly one of the bigger influences on “Union Furnace” in terms of sheer depravity.

How would you describe your own directing style?
I’m a big believer in never cementing exactly how you’re going to shoot a scene until after you’ve seen where the actors instinctively go first during the rehearsal on the day. The result of working this way is invariably more interesting and organic than a situation where you’re just painting by numbers from a storyboard. Instead, you’re forced to submit to the undeniable truth of a scene. And the actors love it because of the freedom and trust they’re being given to genuinely contribute to the scene.

If you could collaborate with anyone in the film industry, who would it be and why?
Anyone, eh? Well, now that Daniel Day-Lewis is no longer an option I guess…..How about Jack Nicholson? Because he’s still….Jack Nicholson. And Day-Lewis can do the costumes!

For future projects, would you be interested in delving into different movie genres, or directing more horror films?
I consider this film more of a thriller than a full-blown horror film with a capital “H". So that actually is something I’d still like to do. Just unapologetically make the most terrifying, fucked-up thing anybody has ever seen. That’d be fun. And I’d like to do a musical too. Maybe I should just combine the two and make the most terrifying musical ever.

What is the most important piece of advice you have been given in regards to filmmaking?
“Don’t fuck up” - Rick Rossovich.

If you had infinite resources and budget, what is a fantasy project you would like to tackle?
Seth Hammond is……Batman!

What’s next for you?
I’m so excited about our next film “Stranger in the Dunes” which is already finished and will be playing at festivals this fall. It’s a thriller on the more sci-fi side. Can’t wait for people to see it! And we’re in pre-production on our new one as we speak.

Union Furnace is available to purchase on Blu-ray and DVD on August 15, 2017.