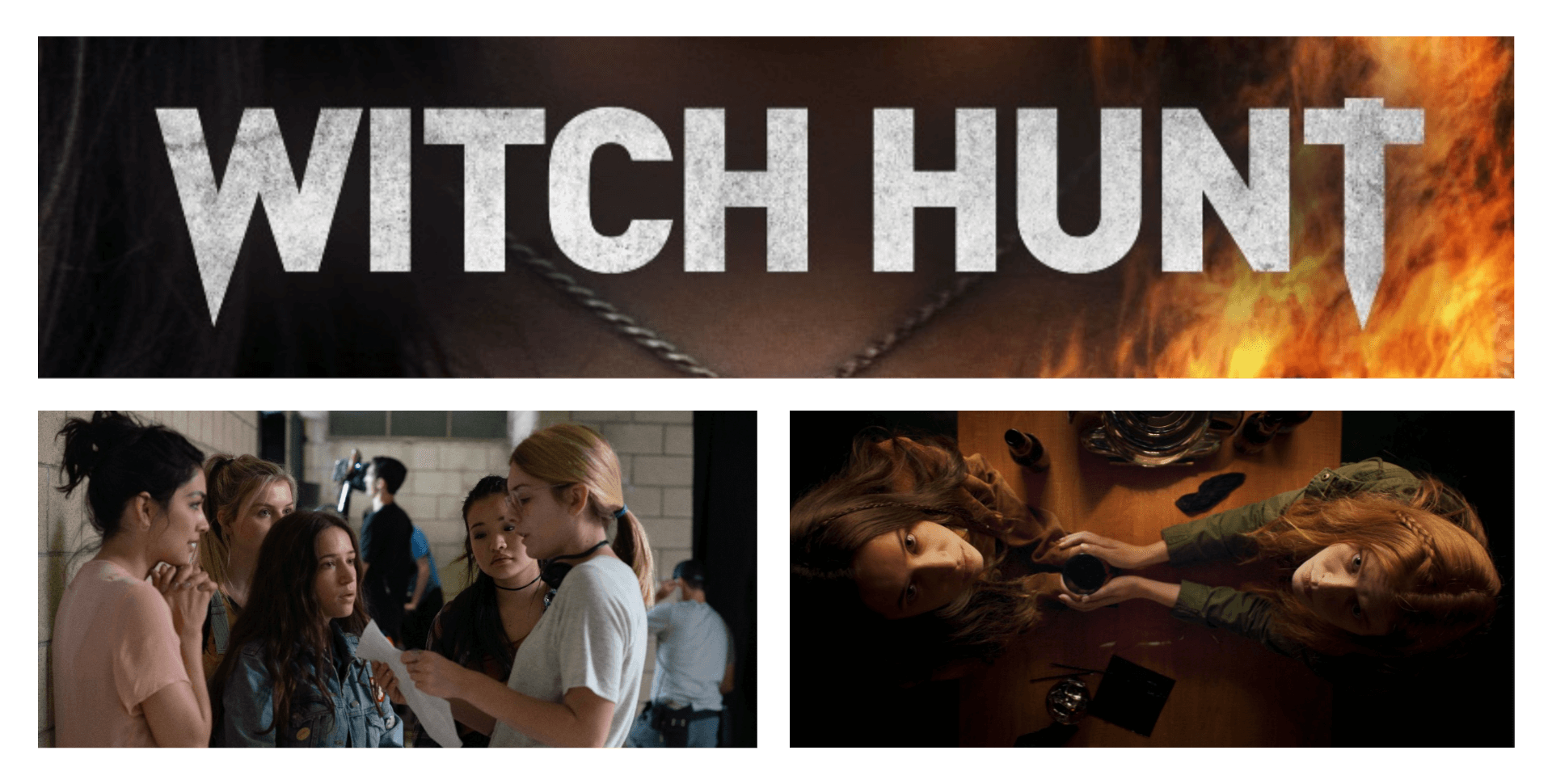 Witch Hunt is the 2021 film about a family harboring illegal witches on the run from the state.

The director of Witch Hunt, Elle Callahan spoke with Borrowing Tape writer Nace DeSanders on various elements of the filmmaking process. The film was part of our 2021 South By Southwest Film Festival coverage. You can watch Witch Hunt in Theaters, On Demand, and Digital starting October 1, 2021.

Watch, listen or read the transcript — edited and condensed for clarity:

Hey everyone. Thanks for tuning in to Borrowing Tape. I’m your host Nace DeSanders, and today I’m chatting with Elle Callahan, the writer, and director of Witch Hunt, an indie film premiering at the 2021 South By Southwest festival. Witch Hunt follows the story of a family that breaks the law by harboring witches and helping them escape the United States.
Thank you for joining us today, Elle.

Thanks for having me.

So, let's jump in. "Witch hunt" has become a phrase we hear so regularly now. Can you tell us a bit about your choice to make it the title?

Well, it's like you said, it's a word that we hear thrown around a lot. And it had a very different meaning a few hundred years ago. So, since my film is taking the witches from the past and putting them into the present, it kind of just felt fitting to kind of take back that meaning of the word. Yeah, that's what was happening. I mean, there's just a witch that is being hunted.

So you're from Westborough, Massachusetts, which you already know is a quick one-hour drive from Salem, Massachusetts. Do you think your upbringing has affected the types of films you make and Witch Hunt?

Definitely. Growing up in New England, we learned about Salem a lot, and I've been there multiple times and I've always wanted to do a movie about witches probably because of that. And also, it's just the culture of where I was young. So, when it finally came time to tell my own stories, I definitely wanted to incorporate witchcraft into one of them.

How did you go about writing the central characters in the film?

Well, I always write them like I'm writing my friend or my sister. And so I wrote Fiona like she was my sister who actually I do my sister's name is Fiona — I named her after her. And then our protagonist Claire, I wrote, like I was trying to write like a younger version of myself. I try to put myself in all my characters and I think when you're that age — when you're in high school — you just want to fit in and in the world that she's living in. Unfortunately fitting in is being part of this kind of oppression of witches. And so, her whole journey is kind of coming to terms with the fact that's not really the right thing to do. You have to discover what you know, you have to find your own way, and that sometimes doesn't match up with what society is portraying as being I'm deeming correct.

How did you go about writing the scares of the film?

I write all my scares in an attempt to scare my mother and myself. When I'm writing, I'm like, oh, you know what? I would hate it if this happened. And then I write it. Maybe it's like taking power back, cause I'm very easily startled. So I think of what I, as a viewer would be creeped out by the most, and then I just write that.

And was your mother scared by the film?

But she also is excited about the characters and stuff like that, so there's a lot more for her in this one.

So what role did VFX play in your film?

A big role. I mean, since magic is so predominant in it that we had to make sure that it looked magical. So, we worked with a bunch of different, really talented artists to help bring that magic to life. I do like to use practical effects as much as possible because I just think it creates a better environment to act in and also it's just fun to do kind of tricks on set. But then a lot of those have to be enhanced with the effects to make them seem more seamless.

And was it difficult to direct around the VFX or is there someone on set to help you with those kinds of things?

Kind of, yeah. I mean, I come from post-production. I've worked in VFX for a number of years, so I have a good grasp on it, but it is a challenge because you have to imagine things being there. But you know, so much of movie-making is taking your imagination and throwing it in front of the camera. So it's just an added step.

That's awesome. So this is the perfect segue into my next question. Like you said, you've worked on some major Hollywood films. You were editing in the editing department for Wonder Woman and Krampus. You were in the special effects department for The Avengers. How have your experiences helping out on other major huge blockbuster sets helped you in your own filmmaking?

Well, I think being a part of such big films, you kind of get to see all the different aspects of filmmaking and how important they play in telling a cohesive story. And also just being around directors and just watching them work and seeing how everyone has different styles and different ways of working and then figuring out like how you're going to do it and what works best for you. And working on big movies like that is just fun. It's kind of as old Hollywood as you can get and there's a kind of a romance about that which is really fun to take part in.

So which films or directors have influenced you as a filmmaker, but also the film, Witch Hunt?

Guillermo del Toro — all his work were big inspirations for me specifically like Pan's Labyrinth. I pulled a lot from that. The Haunting of Hill House was another big influence — their scares wagon scares are fantastic. And then Patty Jenkins is another big influence. She's a fantastic director that gave me seeing her work, gave me the courage to go off on my own and make my own films. She does such amazing female-centric stories but doesn't make them feel like it's cramming them down your throat. It just feels so organic. And so we've been trying to channel that into my work as well.

Oh, fantastic. So are you currently working on any other projects? Something we should be looking out for?

I wish. The pandemic has really shut down everything, but I have a lot of scripts that I've written in the past year, in my apartment alone being safe. And hopefully one of those will go into production soon when it's safe to do so.

Awesome. So we'll be keeping our eyes out for you. Thank you so, so much for taking the time to chat with us today.

Thank you for having me.