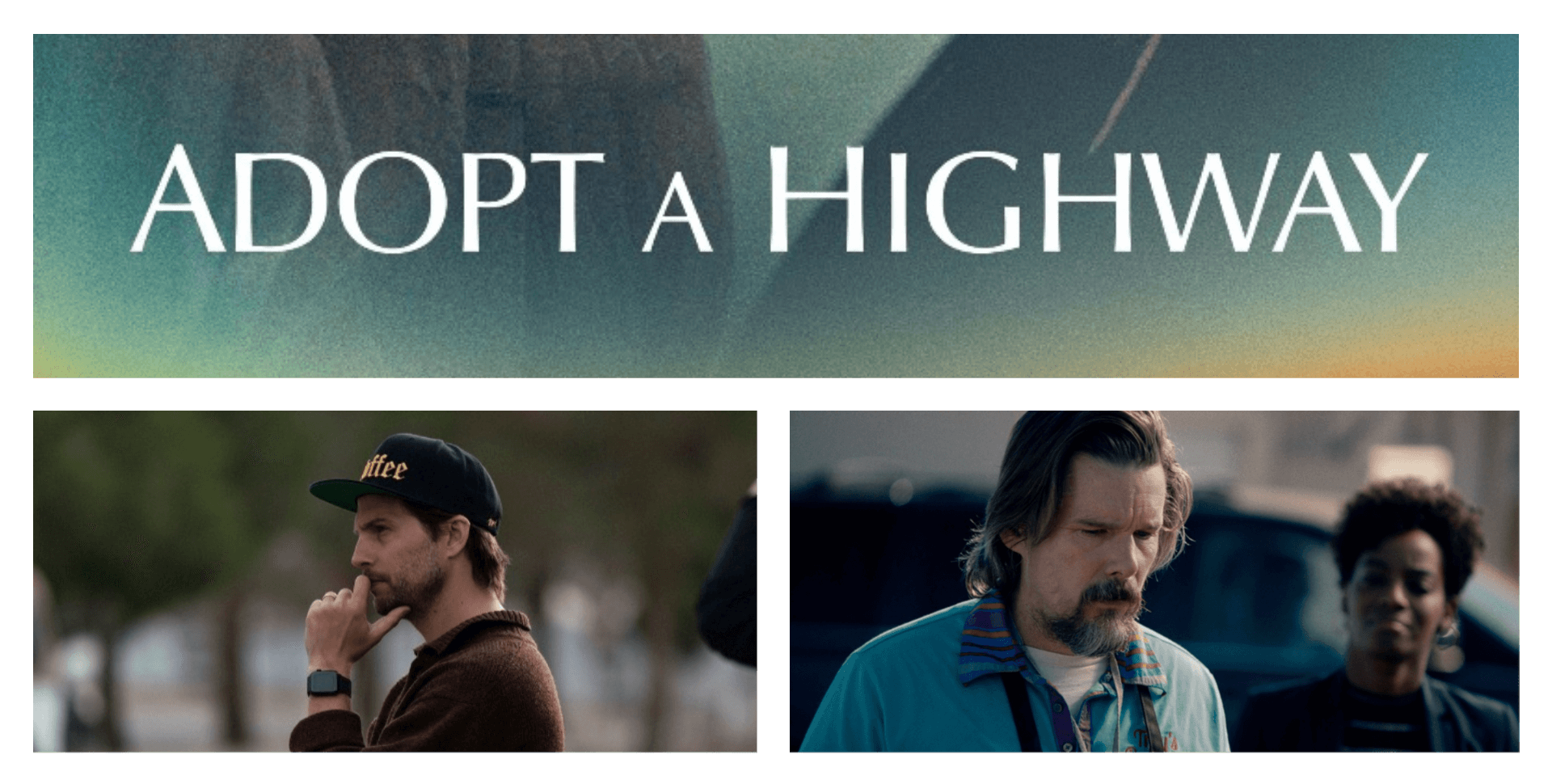 Adopt a Highway is the directorial debut from Logan Marshall-Green who is known for his stellar acting in the critically acclaimed films Upgrade, and The Invitation. The drama follows Russell (Ethan Hawke), an ex-con newly released from jail after spending two decades in jail for marijuana possession due to California's Three-Strikes Law. At the fast food restaurant where he works as a dishwasher, Russell finds an alive baby who has been abandoned in a dumpster and in a moment of kindness and panic, decides to take care of the little one.

Borrowing Tape luckily had the chance to interview Logan Marshall-Green about his first-time writing/directing Adopt a Highway, his favorite moment on set and what he has coming up next.

RLJE Films releases Adopt a Highway in theaters, on VOD and Digital HD on Friday, November 1, 2019.

How was Ethan Hawke brought on board and cast as lead as the recently released and relatively harmless ex-convict Russell Millings?

Ethan was brought on board by himself. We sent the script to Ethan and he was interested, had some questions, certainly wanted to know who the hell I was, because we only were acquaintances, he didn’t know me as a director. But then, we figured out a home for this place in Blumhouse, and through a scenario kismet, found out that Jason and Ethan are not just great friends, they’ve worked together and there’s some familiarity, you know, Ethan worked for Blumhouse. But you know, the best thing to get a movie made is making sure that people are familiar with each other. You know, when people are familiar with each other, hell you can make a movie, you know? But it’s when everybody doesn’t know each other and we’re all circling each other and we want to talk about it instead of just doing it, that’s when movies don’t get made. So I was very fortunate to find a home in Blumhouse, and a leader, and an actor and the rest takes care of itself.

What were some of your favorite scenes to direct on the set of Adopt a Highway?

You know I think the scene that I remember the most is the one on the pier. Because I did no directing -- I just, I was an audience member. It was a scene in which Russell is speaking about his father and his stamp collection to a sleeping baby, and it’s a very personal scene for me. And, Ethan was so...it was just one of those days where the light, the day, the baby, the actor, the camera, the seagull, the buoys, all came together in kismet, and I just got to sit back and watch an incredible performance, and the performance just happened to be my story. 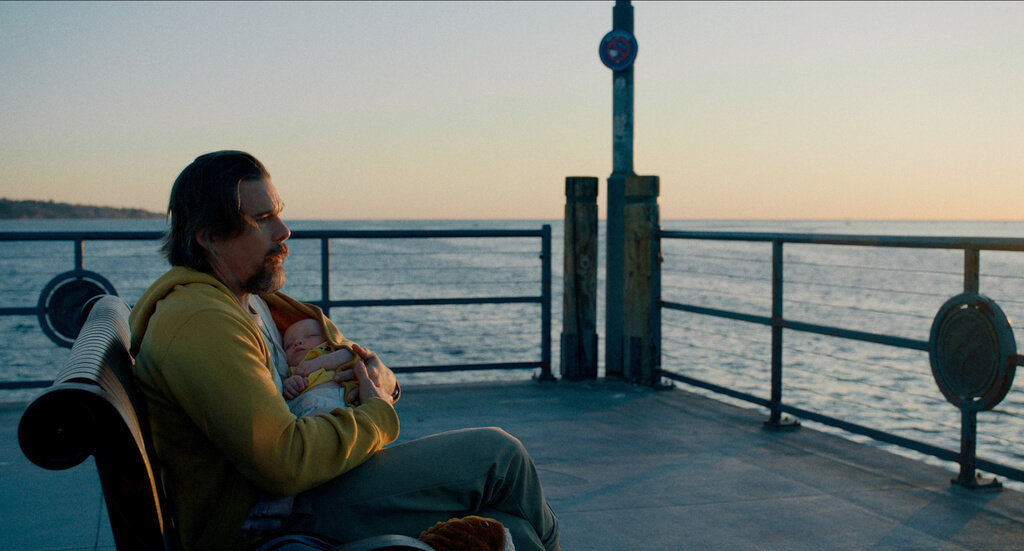 What inspired the story behind Adopt a Highway and what were the reasons for choosing Russell Millings as the main protagonist?

My fear as a new father and the dichotomy of my love as a new father was the engine behind this story. Now the engine behind the character, though, is one that is the amalgamation of many other archetypal characters like Lenny Smalls or Billy Crudup in Jesus’s Son, or even some of Ethan’s own characters. One of the reasons Ethan was first on my mind was his ability to put his alpha aside and draw his beta to the surface and just disappear in character. And that’s what you’re seeing in Russell Millings is, you’re seeing, I think, one of the most nuanced performances of Ethan’s career and that’s saying something because every performance is nuanced of Ethan’s.

How was your experience of working with cinematographer Pepe Avila del Pino?

Yeah, Pepe Avila del Pino is a very good friend of mine, and he’s someone I’ve wanted to work with for a long time. I worked with him on “Quarry,” and he’s done incredible work. And I worked with him actually at NYU when he was still at NYU, on a project that I did with him and James Franco and Chloe Sevigny. He was a rockstar in school, and he was someone that I just..I love his light. I love his hues, I love his framing. He has a similar taste. He comes from similar schools. Loves filmmakers like Haneke, Linklater, and Fleming, and Cuaron. He has...you know that’s it, we have a shorthand. And I needed to have that, being a first-time filmmaker. I needed to have a shorthand. I needed all the safety nets I could get, and boy, did I have them in a house like Blum and an actor like Ethan. 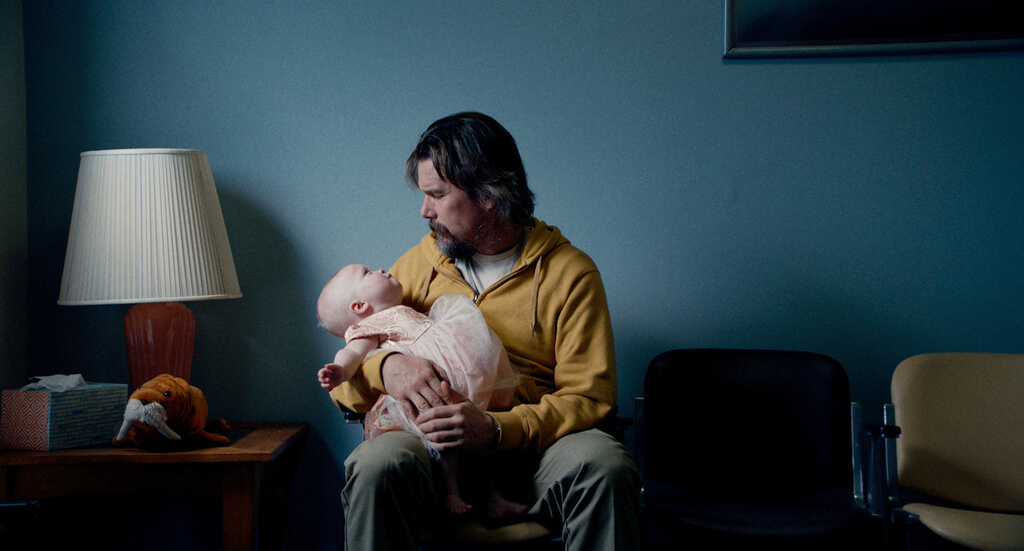 Did directing the film help to develop a sense of how you'd like to handle future films you make and the types of themes/genres you'd like to visit?

Yes. Being a first-time filmmaker, the thing you have to control is your urge to be a second-time filmmaker, because you don’t know what you don’t know, and, man, you don’t know anything. And you only realize it after you’ve made your mistakes. But man, I can’t tell you how many times I’ve said to myself over the course of making this film “Oh, I can not wait for another shot at that, as a director. I can’t wait to approach that differently next time. I can’t wait to let go and let that department do their work.” Most of it is like I can’t wait to let go, you know, more. Because I -- that’s what first-time filmmakers do. We clench, and a lot of our story and what we’re trying to gain, that slips through our fingers. For me, I’m so excited I’m writing furiously in order to get that chance to direct again. Because I am so excited to not make those mistakes and to approach it with a little bit more ease.

What films/directors have had the biggest impact on your life and why?

Michael Haneke, first and foremost, Karyn Kusama, Ava DuVernary, Martin Scorsese. You know, these are no brainers. Men and women who tell great stories and they do it knowing what they want. If there’s anything I pride myself in, it’s that I have worked with some of the greatest directors I could have ever hoped for. So in doing so, I made sure to sit there on set and steal everything I could.

Up next for me is, hopefully, shopping my next script. But at the same time, releasing a new series called “Shadowplay” next year that is myself, Michael C. Hall, Taylor Kitsch, and the great Nina Hoss. It’s actually fun and it’s coming to a TV near you soon.

Watch Adopt a Highway while in theaters, on digital or on demand now