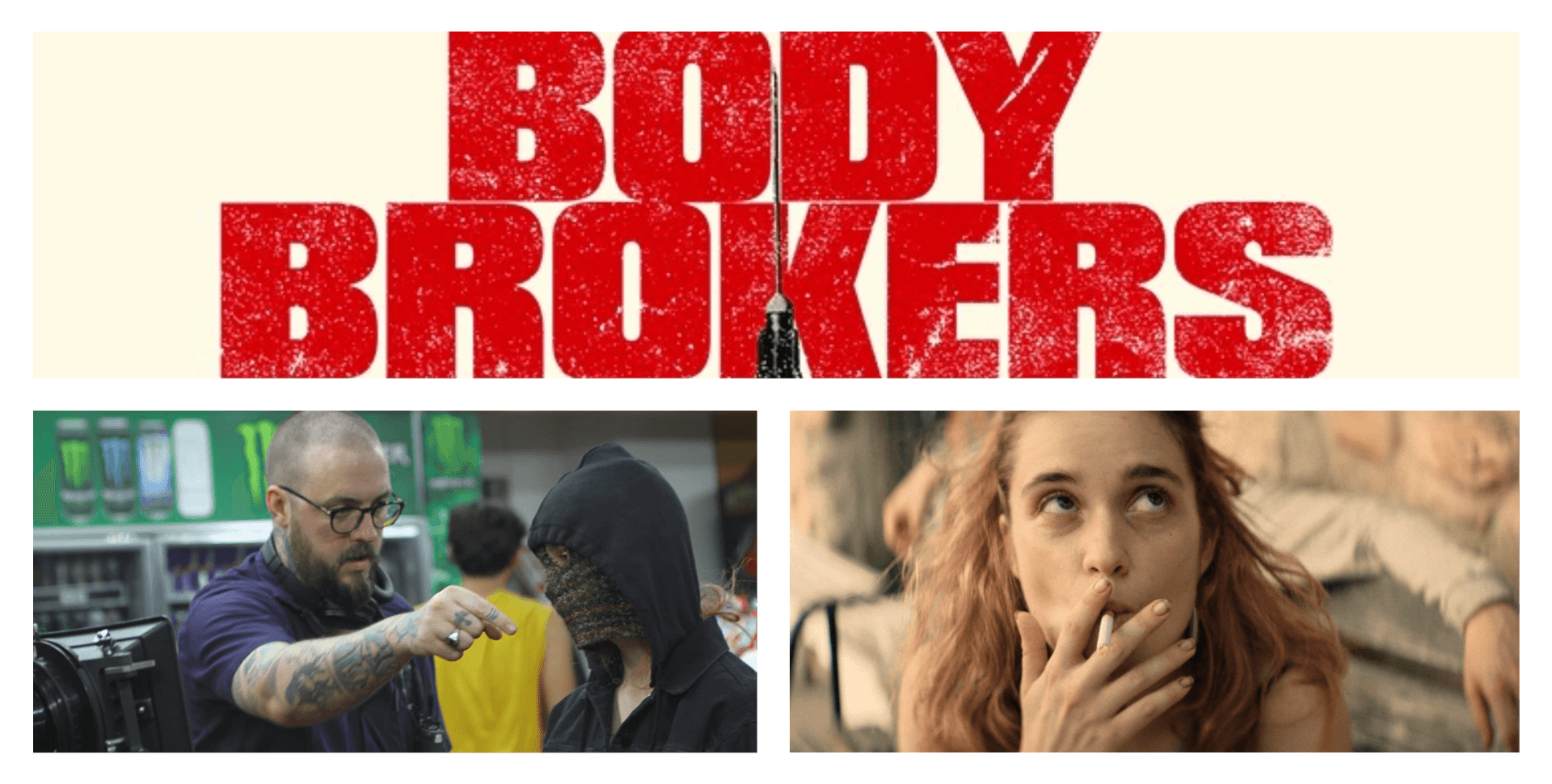 Body Brokers is the 2021 crime thriller film that follows Utah, a young man in recovery for substance use disorder who joins a scam operation within the rehabilitation system.

The writer/director of Body Brokers John Swab spoke with Borrowing Tape writer Nace DeSanders on various elements of the filmmaking process. The film is now available to watch via VOD and digital platforms now.

Listen to the podcast episode and read the interview transcript, which has been edited and condensed for clarity:

Hey movie lovers. Welcome to Borrowing Tape. I'm Nace DeSanders, and today I'm speaking with John Swab, the writer, and director of the new crime thriller, Body Brokers. The true story of how the monetization of rehab facilities in the U.S. led to a multi-billion dollar fraud operation using the patients as both workers and products. Thank you for virtually being here, John.

Thanks for having me.

Let's jump right in. How did you find out about this magnificent, true story that the film is based on?

Because it happened to me, and it's based on firsthand experience of my own and people I know.

Oh, wow. So, you've managed to pull together this super amazing cast with Michael Kenneth Williams, Jack Kilmer, Frank Grillo, Jessica Roth, Owen Campbell. And that's just the beginning. Everyone is so great. How did this wonderful team come to be?

Yeah, everybody kind of, I don't really know. I mean, my producer, Jeremy, and I started casting right after I wrote it. And we first went to Melissa Leo, who's a friend of ours. And she immediately said, "Yes." And then from there, we went to Michael K. with who Jeremy has a really good relationship with his manager and after both of them were attached, it wasn't hard to have other people want to join the team. And everybody had a connection to the story in one way or another. So people were really enthusiastic about coming on.

When you were writing, did you have anyone specifically in mind, or were you just getting the characters out there?

Yeah, I didn't. I didn't have anybody in mind.

Hmm, cool. This film and your last were both shot in Tulsa, Oklahoma, which is also where you're from. So what part does choosing your hometown play in your filmmaking? Was it out of inspiration or just convenience?

So this is actually my third of four films that I've shot here, and we're in prep to do a fifth here, and I think for indie filmmakers, it's really important to use what you have at your disposal, and I'm from here. And that affords me a lot of extra things that I couldn't do elsewhere shooting here. So it's a logistical thing and also just comforting to work from home.

I bet. So when writing the screenplay, how did you go about structuring Body Brokers? Was there a specific process through writing this film?

Um, not really. Once I decided I was going to write a story about it and had done the research, it kind of just came out of me in a pretty organic way. I mean, I understand the process of treatment from being an active addiction to detox, to residential, to outpatient. So, I mean, just, I use that as the structure for the film, and also, and within that, structured Utah's journey and arc from being on the street to recovering and then ultimately becoming a Body Broker himself.

Wow. Very cool. So, can you tell us a little bit about working with cinematographer Matt Clegg?

Yeah, I mean, Matt and I on Body Brokers was our second film together. We just finished our third and it's nice working with people you've worked with before because you kind of develop a shorthand and you can trust them to do their job, and then to do a good job with it. So, in Matt's case, by that time, we kind of knew one another and knew where to, to push and pull, so.

Nice. That's really good that you have that working relationship. You can depend on people — super important. I absolutely love the film's conclusion as I thought it was a realistic consequence. Why did you choose to end things for Utah in that way?

Because I feel, like you said, it's realistic, it's the truthful way to end the story. We're trying to we're telling a story about something that people don't know that that's happening. And we really want to leave a lasting and progression on the viewer. So, you know, less than 10% of people recover from drugs and alcohol, and most of them die, and I see films all the time that portray addicts and recovery. And they always end skipping off into the sunset or with the guy getting a job that he always wanted or whatever, and it's by and large, bullshit.  So we felt like this was the most truthful way to in the movie.

Yeah, that's great. So the end of the film also suggests that viewers won't do anything about America's substance use disorder epidemic, which honestly is true, but what actions do you recommend taking for the few that will do something?

I think it's just pressuring [the] state legislature to put things in place that will regulate the treatment industry, and that's really the only thing that can be done. A lot of the laws that govern the treatment industries are pretty archaic, and people have figured out the workarounds — so they need to be looked at with fresh eyes, and also with data and by experts.

Awesome. So which films or directors have influenced you as a filmmaker, but also the film, Body Brokers?

For Body Brokers, It's not a secret when you watch the movie, but I was obviously inspired by like Adam McKay's, The Big Short, and Vice, and Thank you for Smoking. Films like that were taking on serious subject matter, but also trying to entertain you while educating you on a kind of a complex system or scheme or issue.

Yeah, cool. So you stay very busy. You're in pre-production for two films, you're in post-production for another two, and another one of your films Run with the Hunted just came out only last year. So how do you manage all of it?

You know, I just stopped shooting dope and started making movies. So, you know that's kinda what I've substituted one drug for another and my new drug of choice is making films. I have a great partner in these films and my producer, Jeremy Rosen and we love movies and we are just trying to get better at making them. And we've seen a lot of growth in each film. We just finished a movie called Ida Red that I'm more proud of than anything else I've ever done. And it's special. And we're going into pre-production on two movies right now and just trying to keep moving the ball up the hill.

Cool. Can you tell us a little bit about these upcoming projects? You know, what you're allowed to tell?

I'll tell you about Ida Red is a Neo-Western Action film, starring Melissa Leo, Josh Hartnett, Frank Grillo, and others. And it's a really cool movie. It's like a throwback to a lot of my favorite filmmakers and movies of the seventies. In making that, Jeremy and I had so much fun, cause it's a genre and a type of film that he and I grew up loving. Body Brokers was very much like a film I felt like I had to make because I knew so much about it and nobody else did. And I didn't know who else would ever make this movie if I didn't. But I'd read and this film we're getting ready for Little Dixie and Candy Land. They're very much homages to our favorite films and it's fun to have the opportunity to make films that are inspired by things that I grew up watching that made me want to make movies.

That's wonderful. Awesome. Thank you so, so much for taking the time to chat with us today.

Thank you very much. Thanks for taking the time to watch the movie and talk about it. We appreciate it.