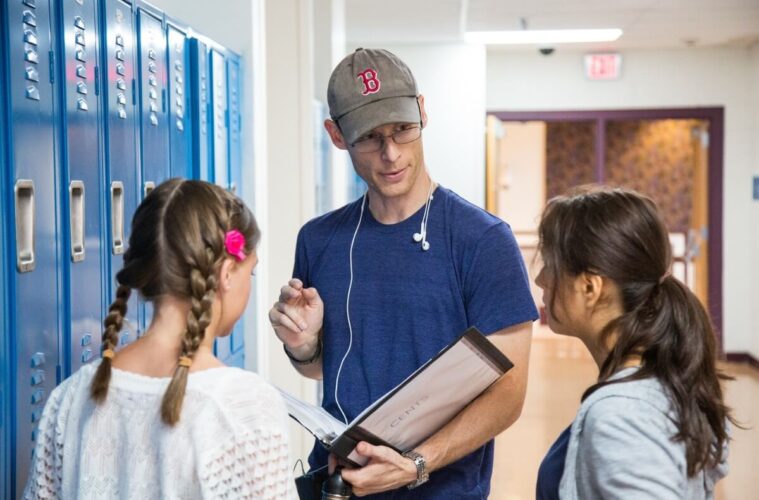 Cents is the first feature film for Writer and Director Christopher Boone. Sammy (Julia Flores) is an exceptionally intelligent twelve-year-old, who creates a moneymaking pyramid scheme with a group of school rivals. They do this by exploiting the school penny drive, however, their endeavors become increasingly more entangled.  Cents is an impressive effort from a first time director and is scattered with impressive performances from a cast young and old. The film also contains many pertinent ideas that will demand attention from its audience.

As your first feature film, how was the experience?

Making my first feature film was an incredible learning experience, one that I’ve waited a long time to do. For the past several years, I’ve been focused almost entirely on my screenwriting, so putting on the director’s hat and tearing down the script with the help of our cast and crew, then bringing it to life in front of the camera every day and finally pulling it together with our editor and composer was extremely helpful in my growth as a storyteller.

What was your intention behind a practically all female cast?

It started by accident. I wanted to tell a story set in the world of middle school girls and how they relate to one another, and I decided to focus on a very intelligent yet flawed female protagonist. As I crafted the script, I realized I didn’t really need any male characters to tell the story I wanted to tell. Then it became a challenge: can I write a script and create a film with an all-female cast? In the end, we have two male characters with lines, but neither has a name, nor talks to the other male character. We pass the reverse Bechdel test. Interestingly, though, because there are obviously boys in the school of our story, it’s really not that big of a deal. Boys just aren’t the focus of the story.

Is there a demographic that you have purposely aimed the film towards?

I think our film spans a few demographics. I’ve said before that I hope young audiences see pieces of themselves in this film and recognize the changing roles they play when faced with the daily challenges of simply being themselves. I hope older audiences watch this film and realize how much young people communicate with each other in ways unseen by adults.

One of the messages of the film appeared to be centered on the dangers of greed and materialism. Could you expound upon this idea and what it means to you?

I never really thought about the story in terms of greed and materialism. Instead, I see it more in terms of a character pushing limits to get what she wants, succeeding in that goal, and in that very moment discovering what she wants is not what she needs.

As well as the notion of greed, there also seemed to be some exploration of envy and wrath. What ideas or messages would you like the audience to take away from the film?

When writing the story, I certainly wasn’t thinking in such biblical terms – greed, envy, wrath. But I was intrigued by the idea of our desire to fit in as we reach adolescence, and I think people can relate the feeling of envy from this time in their lives when someone has something you want – the latest fad, popularity, lots of friends. At this particular age, I think it’s difficult to see more than two inches in front of your face. As adolescents, we’re so concerned what everybody thinks about us, but it rarely occurs to us at this critical age that everybody is only thinking about herself or himself and not really focused on anybody else.

In terms of ideas or messages I hope audiences take away from the film, I’d say I hope people, both young and old, more carefully consider the consequences of their actions on other people. I’d also like to encourage people, both young and old, to pursue their passions and not to hide their gifts. Share your gifts and talents with the world. You may be surprised what comes back to you.

How different was directing children in comparison with the adult actors in the film?

Directing these amazingly talented young women was a highlight of this project. Julia, Lillie, Jy and Claire brought so much joy and enthusiasm to set every day that it was just fun to come to work. They were also incredibly well prepared, asking insightful questions about their characters and story arcs well before we shot their scenes, so on the day, we could run through takes and make minor adjustments to get their performances to shine. In fact, our adult actors enjoyed working with these young women so much because of their energy and professionalism.

Furthermore, can you see yourself working with child actors in a protagonist role in any future project?

Absolutely. If the story I’m trying to tell focuses on a young protagonist, I’m more than game to work with young actors again.

How important is writing the screenplay as well as directing a project for you?

I think of myself as a screenwriter first and a director second. Everything starts with the story. The joy of writing scripts is the movie can be perfect in your head. The fun of directing is taking the blueprint laid out in the script and solving all of the problems you face trying to turn that blueprint into a movie. Both roles are incredibly challenging, which I think is why I enjoy wearing both hats.

Do you feel that both writing and directing your first feature film framed the experience for you in a certain way?

Yes. I truly believe you have to make your own opportunities, especially in the film business. Nobody is going to make your first film for you. Do you want to direct a feature film? Then you better start by writing a great script. Once you’ve written a great script, you need to figure out how to make that script into a film. You have to want it more than anybody else, and you need to convince people about your passion to make this film right now so they get on board with you. At that point, it is no longer your film. The film becomes a team effort because you certainly can’t do this alone. You have to lead this team to bring your vision to life, but always be willing to listen to new ideas that will make the best film possible, no matter where those ideas come from.

Do you have a dream project you would like to commence production on?

Yes, my dream project would be to make a second feature film.

I’ve recently finished a draft of a dramatic family comedy that stems from personal experiences and specific ideas in the hopes of finding the universal. I’m also researching a handful of new story ideas. And I need to remember to pick my kids up from school later today. Easier said than done.

Cents is now available to purchase on digital platforms (iTunes, Vimeo, Amazon, Google Play, VHX and Microsoft) and can be watched through various cable and satellite providers.