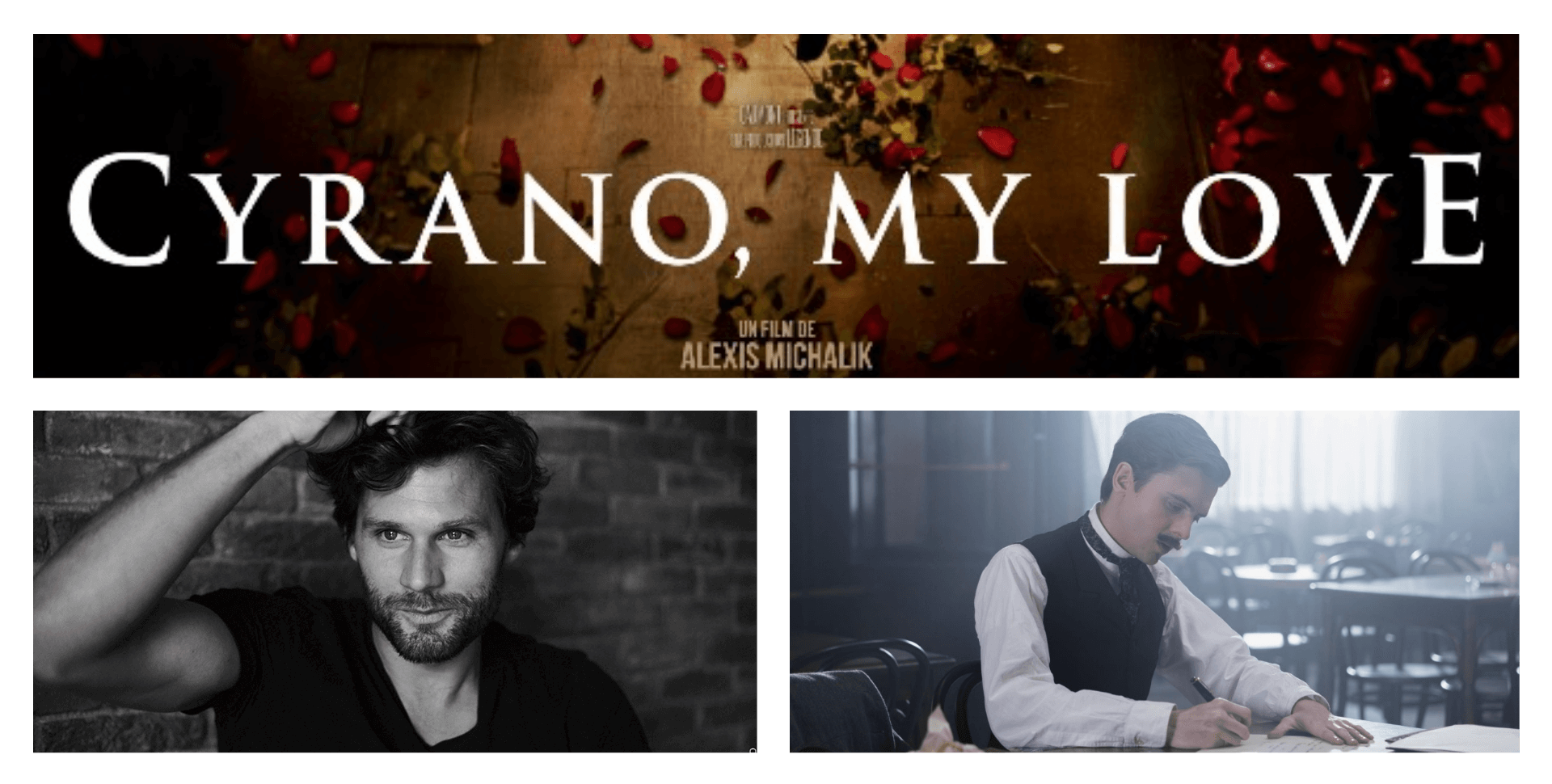 A struggling poet, working against the odds to bring to life a great triumph of the French stage.
A story of a man who's talents, charm, and nose can barely be contained on the page.
This is a film about the poet writing about that man with a nose.
On October 18th, into USA theaters it goes.
Alexis Michalik is the man who did the writing and direction.
For Cyrano, My Love, he took the time to answer a number of our questions.

What is it about this story that inspired you to write and direct it?

I’ve always been a fan of Cyrano (the play) and maybe 20 years ago I saw Shakespeare In Love and fell in love with the movie and thought, “That’s a great idea, we should have done that with a French writer and a French play”. The idea of the creation of a masterpiece with the life of the writer entangled…but which play? And so a couple of years later, I was reading Cyrano again and I thought that’s the play that would be great. And then I learned, at the end of the play there was a little file and a few words about the writer and the conditions of the writing of the play. First of all, Edmond Rostand was only 29 when he wrote the play when I thought he was much older and wiser. Then I learned that every actor and everyone on this play thought it was going to be a flop because each and every one of his (Edmond’s) previous plays were utter flops. Nothing worked before Cyrano. And on the night of the premiere, the opening night of Cyrano, everyone was certain it was going to flop and it was the biggest hit ever in French theater. So I thought, hey I’ve got a movie here, and that’s when I started working on it. And then 10 years later I met with a producer who said, “Hey great idea we should make a movie out of it,” so I started writing the script and then we started trying to find money for it but it’s a historical piece so people (the financiers) were a little bit cold. The subject of theater isn’t the most popular for movies. Eventually, after a couple years trying to finance it, I said, “Hey why don’t I try to do it in theater?” and my producer said, “Why not do it in theater?” So I did it in theater as I was a theater director and my plays were working pretty well at the time, and we did it and it was a huge hit. It’s still running today, it’s in its 4th year of running, and this success allowed the movie to be made because instantly the financiers and producers came back and said, “Hey we should do this as a movie.” And that’s how it happened after 15 years.

How do you go about assembling an ensemble as wonderful as this?

Yes, I’m very proud of this ensemble cast. I wanted many things. I knew that it was going to be, a lot of actors in the scene at the same time and there was going to be no-cut scenes, long scenes with steady cam. So I needed people who were able to have a feeling of the troupe, of the gang. So I only took theater actors. Actors who have acted in movies, of course, but they are all at the basis theater actors. They have all played in theater and very different types of theater. Some very popular comedies, some more an artistic auteur, but all of them have this in common. And I wanted people who were, of course, going to be sympathetic and not be too egotic.

What mistakes have you made in your previous shorts that you worked hard to avoid here?

I was really lucky to have directed shorts. Obviously, I learned how and what works on a set and I learned that the most important part, almost, is to finish your day on time. Because as long as you go over time you’re not sure you’re going to be able to grab your scene. That is something I tried to apply to Cyrano, and I applied to my shorts. I have this kind of really, really strong notion of the day and I’m always asking my first AD, “Where are we? How long do we have left?” And on Cyrano, My Love I knew it was going to be tough because we had a lot to shoot in two months and it was going to be long hours. And so I did my best to gain some time so that the crew would finish a little early and we wouldn’t be too tired. That’s also one of the reasons why there’s so much steady cam in the movie, and why it’s always in the motion and the shots are always moving, because it was faster to ask my DOP, “Can you just make it so we can film 360 and I can anywhere and make one shot out of the scene?” Because I’m a theater director, it was easier to place the actors here and there and say, “Okay let’s rehearse the scene as if it were theater, and then I’ll shoot it in one take going from one to another and that will save us tremendous amounts of time.”

Why do we still need theater when we have cinema?

I think any way of telling a story works. I think that theater is as essential as cinema, as poetry, as novels, as TV shows. If we have to compare theater, it is simpler than cinema, it costs less when you produce a play. It only takes actors and a story and some people in the audience. This has been going on for thousands of years and I think it will be going on for thousands of years. Cinema will have to evolve, and needs to evolve, where theater can be done at any time - even without a theater, you can do theater. And the connection with the actors is, of course, way easier because they’re actually real actors that you’re actually watching. It has benefited from all of cinema, it has brought music to help with the emotions and the comedy and the lighting, and the two worlds can learn from each other, but I really believe that theater is the basis, the core.

What have you learned most as an actor that helps you to write and direct?

Tons of things. First of all I’ve learned what makes actors unhappy. What makes actors unhappy is not to play. When an actor is playing he is happy. So I try to make them a part that he feels that he’s doing something. Even the smallest parts have to have one line that knows that it’s going to get a laugh. And if he knows he’s going to get a laugh then he’ll be super happy to have one line. Also an actor likes to be directed, if it’s a good way to be directed of course – if it’s not illogical, an actor really likes to feel like he’s being (taken) care of. Also I kind of can see the moment where the actor is actually talking about something that is true and sincere, and we need to talk about it and I need to understand it, and when it sometimes comes from another place - ego or elsewhere - and I will know there is another way to manage it. This is a great thing and I think that every director should study acting at one point in his life. It helps tremendously to understand and to find the words to direct.

What, if any, great stage roles do you aspire to portray?

What films and/or directors have had the biggest impact on you as a filmmaker?

My favorite filmmaker is Billy Wilder. I admire his sense of dialogue and his rhythm and his finesse and the way he manages an ensemble cast. I’m a huge fan of all his movies. I love Stanley Kubrick, for different reasons, but for his genius as a filmmaker. I’m a big fan of musicals, and I think that inspired my rhythm. If you look at Cyrano, My Love you can feel that there is a musical pace. I’m a huge fan of West Side Story, Singin' in the Rain – the golden age of musicals. More recently I would say I love writers/directors such as Christopher Nolan, Iñarritu, Alfonso Cuaron, all these directors who can shift through periods and times and not tell a story in a linear way and chronological way. I’m really influenced by this. You can’t see it in Cyrano, My Love but in all of my plays it’s definitely the biggest influence.

I currently released my first novel in France which is going pretty well. Called Far, it’s an adventure novel. Next month I’ll be starting rehearsals for my next play which is called A Love Story, and it’s in Paris of course, and I will be acting in it. I haven’t been doing this for like six or seven years, so I’m very excited and terrified of that at the same time, but it’s great. And I’m also following Cyrano, My Love all around the world. As for the next movie, we’ll see. Maybe in a year.