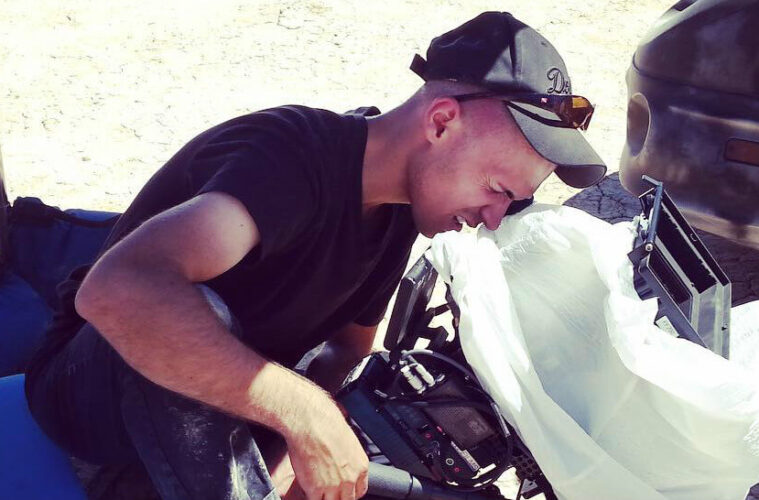 Director Chris von Hoffman’s debut film Drifter is a post-apocalyptic horror about two brothers that get stranded in a small town inhabited by cannibals. The film pays homage to early Australian exploitation films, remaining just as dark and bloody as the new wave films of the 1970s.

How did you come to meet Aria Emory and begin working on this project? Was he always meant to play the lead?
One of the first jobs I got when I first moved to L.A. was a director’s assistant on a Selena Gomez film called Behaving Badly and Aria was a production assistant on the set. We started developing the project in the fall of 2014 and yes, he was always meant to play the lead.

What was the casting process like? Did you have certain people in mind for roles already?
The casting process was quite unconventional considering not a single actor was auditioned. I had either worked with a few of the actors in the past on short films or I had just been fully aware of their work and had been wanting to work with them. Most of them are from an acting school in North Hollywood called Playhouse West.

After filming especially intense scenes, how did you and the actors wind down and regain sanity? [This movie is completely bonkers.]
I’m such a neurotic head case that it’s difficult for me when I’m in the thick of making a movie that I can simply wind down because all I’m thinking about is what I could’ve done better that day as well as worrying about the next day. As far as everyone else is concerned, you’d have to ask them.

I read that you used a Red Dragon camera for this piece. Why did you decide to go digital as opposed to celluloid? [This movie seems to be heavily influenced by grainy 70’s and 80’s exploitation/action/horror flicks so it would’ve been interesting to see that grunge film aesthetic.]
It’s a very straightforward answer in that it was simply a budget issue. The script was already a logistical nightmare for such a micro budget that shooting on 35 or even 16 didn’t once cross my mind.

Speaking of influences, what/who were your influences for this film?
The Proposition, From Dusk Till Dawn, The Rover, The Devil’s Rejects, Eaten Alive (1977), The Texas Chain Saw Massacre 1-2, The Hills Have Eyes, 2001 Maniacs, Last Man Standing… As far as directors are concerned, I suppose John Carpenter, Dario Argento, Tobe Hooper, Robert Rodriguez and George Miller made their way in there somewhere.

I really liked the color palettes used throughout the film. Why did you decide to go with a more saturated look as opposed to a bleak, gray scale like most post-apocalyptic films?
I wanted the film to not have the depressing cold palette most post-apocalyptic films seem to have. I wanted it to be far more vibrant and fun, making it come off like a surreal comic book. The film is already extremely nihilistic as it is so I had to balance things out.

With this being you debut feature, what was the biggest lesson you learned in the transition from shorts?
Always be the last man standing.

What is your favorite scene in the film and why?
It would probably have to be the scene where the brothers encounter the bloody woman in the middle of the night. That was the first scene I ever directed that I got to exercise my true love of horror so to cover a young girl in fake blood head to toe in the freezing cold in the middle of the night was extremely delightful.

What are you most excited for the audience to see?
The film of course.

With an unlimited budget and resources, what project would you tackle next?
I have this out of control high school werewolf script I’ve written that has been a passion project of mine for a few years now.

Lastly, what is up next for you? What are you currently working on?
I’m currently in pre-production on my second feature that we’re shooting towards the end of April 2017.

Drifter will be playing in select theaters on February 24
and will also available to purchase and iTunes and VOD platforms this February 28.