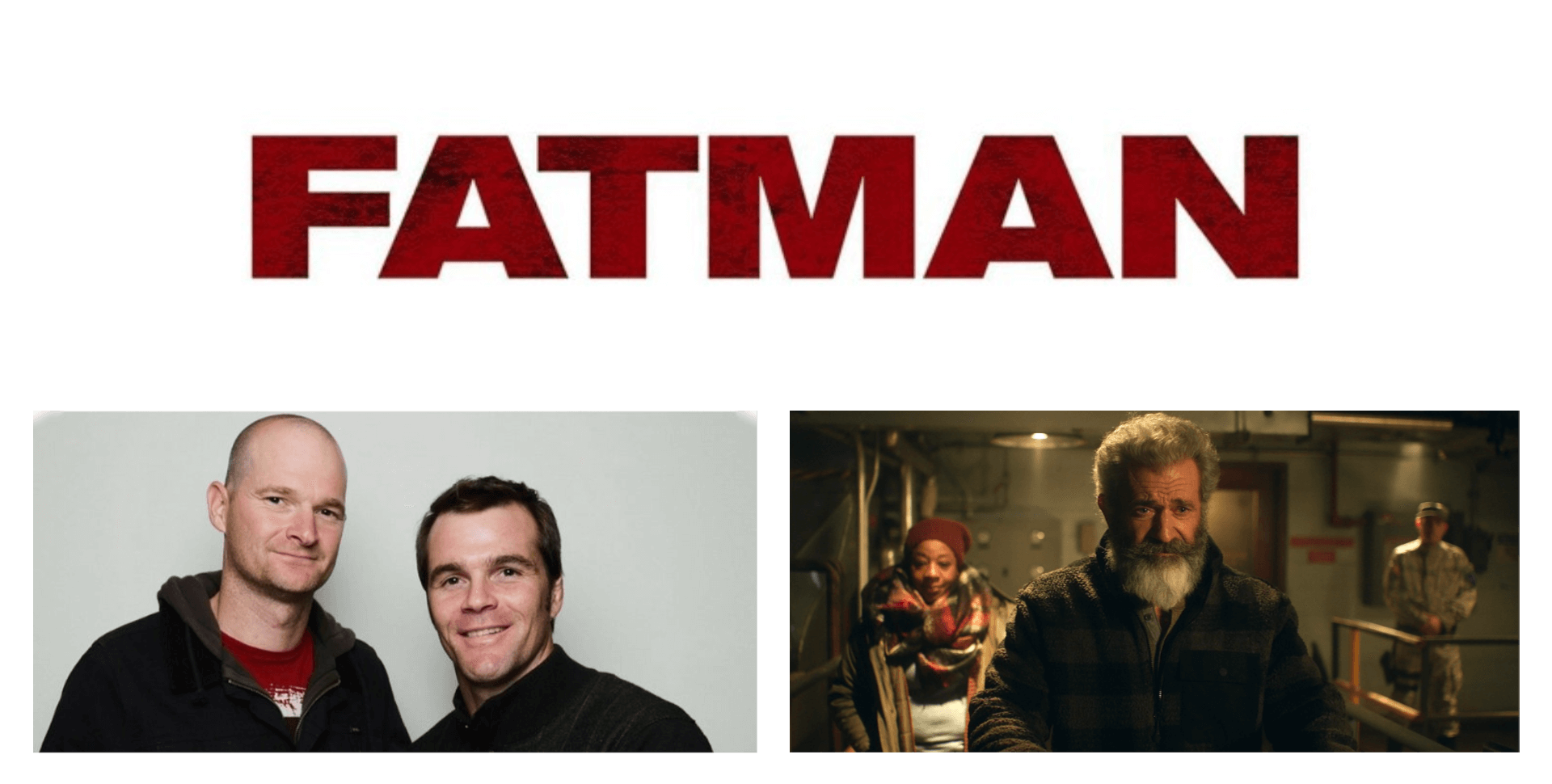 In an unconventional take of the Christmas icon, the movie Fatman follows Chris (Mel Gibson) as he struggles to save his declining business. Unbeknownst to Chris, a spoilt 12-year-old boy named Billy (Chance Hurstfield) hires a hitman (Walton Goggins) to kill him after gifting him coal for Christmas.

Borrowing Tape got to interview The Nelms Brothers about their work writing and directing the action/comedy/fantasy film, 'Fatman' which is now available to watch in select cinemas, On Demand and Digital.

How did you approach the writing process together? What was the inspiration for 'Fatman'?

To start, we’re very fortunate in that we genuinely enjoy hanging out and working together. This may stem from our upbringing in a rural environment. With not many other kids around, it was either get along or be very lonely. We watched a lot of movies together as kids. Our ideal Saturday was renting half a dozen films and devouring a box of donuts. These weekend movie binges synthesized our taste in film.

Our writing process starts with brainstorming. It’s just the two of us spitballing until we land on a story idea we’re both charged about making. Besides it being a tremendous amount of fun, we’d say these brainstorming sessions might be the most important part of the process. It helps us both see beyond our own perspectives. We work ideas until they pass both our shit tests.

With Fatman, the idea came about as we were talking about Christmas movies and remarked that we’d seen the family-friendly version and the horror, come down your chimney with a hatchet version, but we’d never seen a grounded take – where Santa is a real person – how would that work? We started breaking it down. There seemed to be room in the Christmas genre. And we were excited to explore something we’d never seen on screen before. A contemporary Christmas western.

Who is the desired target audience for the movie?

That’s a tricky question. For us, we don’t conceive or sculpt our ideas around specific audiences. Certainly, there are those who might gravitate to a film like Fatman more than others, but we never want to exclude anyone from our films. We are driven by what we think is interesting at the time. We’d like to think there are a lot of people with similar tastes, and that’s who we’re making the films for.

The film features a dynamic cast, including Mel Gibson, Marianne Jean-Baptiste, and Walton Goggins. What was the casting process like for Fatman?

Let’s start with Mel. In 2016, we saw him at a screening for Hacksaw Ridge. He had that wonderful beard and just gave off this perfect vibe. He was at the end of his awards run with the film and looked a bit weary, but his passion for the work was still simmering. After seeing him that night, we were dead-set on him playing Chris!

The idea for Walton was introduced to us through his agents at ICM. We met at a coffee shop. After some small talk, Walton stood up and started riffing lines from the script in character. Mind you, we were not alone in this coffee shop and the other patrons were… let’s say, “riveted.” It was awesome and we just knew he was the guy.

With Marianne, we always wanted to cast a woman of color in that role, but we needed someone who could pull off tough, yet counterbalance that with a nurturing warmth. Marianne was at the top of our list and we feel very blessed she was excited by the role. For us, her lovely accent gave the film an international quality.

Chance, who played Billy, came to us through a video audition. We were blown away and scheduled a Skype meeting. Our only reservation was that maybe he was too good at playing this sadistic kid. Perhaps it wasn’t an act! Fortunately, we found Chance to be a delightful young man in our follow up video conference. He’s just a total pro and genuinely great energy on set!

Mel Gibson as the real-life Santa Claus was a real drawing point to the film. Can you tell us your experience working closely with Mel on Fatman?

It was an incredible experience. Having been long time fans of his work in front and behind the camera, we were really excited to work with him. And it couldn’t have been a better experience. Of course, we were nervous, him being Mel Gibson and all, but he made it very easy on-set and would preface any thoughts with “take it or leave it,” which took all the pressure away and just made it a conversation. During the final shoot out, it was - 36 degrees. We had shot Mel out and he had an hour or so before his next setup. We told him to hit the warming tent. Mel refused to go and told us “if you’re out here, I’m out here,” and he stayed out there with us – which galvanized the crew and other cast members. Mel knows what a film set needs to thrive. He’s a total team player!

The Skinnyman played by Walton Goggins in the scene before the gunfight, confronts Chris about his resentment for not being around. Chris replies, "I couldn't replace your parents." It was an emotionally significant scene as it exposes the root of the character's resentment. Did you intend to make the connection between God/Santa in the eyes of children? Can you tell us more about writing/directing this scene?

That scene meant a lot to us. It’s a very emotional scene for Walton and Mel. Skinny Man is enraged, hurt, filled with spite – and Chris feels horrible revealing his limitations to this man, who he failed. When you’re a child, you put these God-like powers and expectations on fictional characters and there’s something heartbreaking about realizing they aren’t real — or in this case realizing they have limitations. For us, this is also a moment of realization for Chris. The rules he abides by may need to be adjusted.

Can you tell us about directing "Fatman"? How long did production last? What was it like filming on-location in Canada? What were your favorite shots and scenes from the movie?

We had a 33-day shoot. It was beautiful in Canada, but the cold did present some challenges. Fortunately, our Canadian crew navigated these conditions with determined grace. Some of our favorite scenes are – the last shoot out for sure, Elf 7 and Captain Jacobs talking about the elves diet, Chris visiting Billy at the end, and the scenes with Mel and Marianne – they had such great chemistry together, it was palpable on set.

You've previously worked with Cinematographer Johnny Derango on the feature film, 'Small Town Crime.' What was it like to work with him again for the aesthetic for Fatman?

We’ve actually worked with Johnny on our last 4 films: Lost On Purpose, Waffle Street, Small Town Crime, and Fatman. It’s been an amazing collaboration. He’s one of our best friends, he’s incredibly talented and has a great work ethic. At this point, he’s basically the third Nelms brother.

Mondo Boys produced the music for the film. Can you explain a little bit about your decision-making process for composing the score?

We had some very tough comp tracks in the film when they came on – and a few tracks we hadn’t nailed yet. The Mondos came in and just started kicking ass straight away! They’re very talented – with the ability to straddle multiple genres and that’s exactly what the film needed. The tone of the film was very specific, so they really had to thread the needle. They did amazing work!

Which films and directors have had an impact on you as a filmmaker and particularly on your film, Fatman? Out of your fellow contemporary filmmakers, who do you hold in high regard? Which actors would you love to work with?

Unbreakable was a big influence – so was The Good the Bad And The Ugly.

Die Hard and Lethal Weapon are in a dead heat. Gremlins a close second.

Really appreciate you having us! Thanks for the interview!