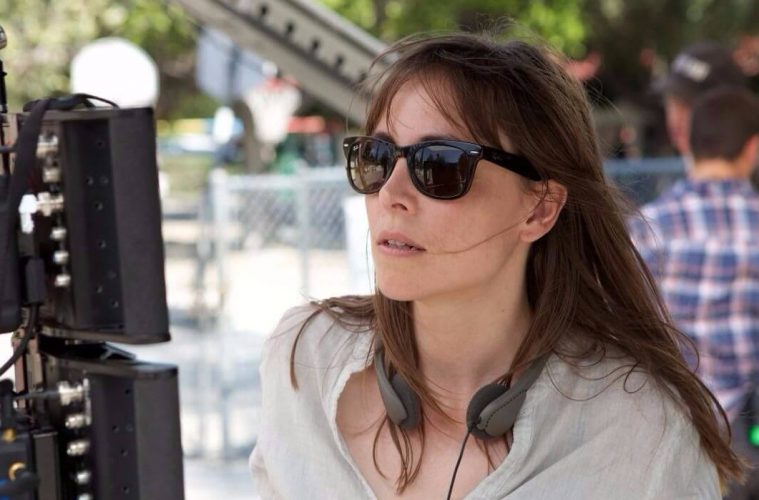 Fun Mom Dinner [2017] is a film written by Julie Rudd and directed by Alethea Jones. It stars Kate Aselton, Toni Collette, Molly Shannon and Bridget Everett as the central group of moms who get together for a fun mom dinner. It’s hard to say whether these women’s paths would have crossed prior to their current state, but in their current state, as middle-aged moms, their main commonality is that their kids all go to the same school. Pop psychology would have us believe that happiness follows a U-curve where the highest degree of unhappiness is in mid-life when one is far too old for youthful naïveté and yet, far too young to fantasize about Depends and giving zero fucks. This may or may not be substantiated, but for argument’s sake, if accepted as true, then the women of Fun Mom Dinner are the hypothetical women at the bottom of that U: right smack dab in mid-life. Whether it’s getting through the choppy waters of a strained marriage, navigating single life again, or dealing with 4 small children, these are the people in society who definitely have some steam to blow off and there’s no better place to start than dinner.

Fun Mom Dinner will be released on Aug 4, 2017. To welcome the film’s release, I recently I had an opportunity to do a Q & A with Director Alethea Jones.

What attracted you to this project?
Whenever I am looking at scripts, I always look for something that offers propensity for the craft. I like to elevate things. I love noisy stuff and color and comedy. I was immediately drawn to that. To be honest, I thought maybe this project wasn’t sent to the right person. I rang my manager about this. “Why did they want me to direct this? I am not a mom.” He said to finish the script.  The characters were older than me. I am not a mom. I’m Australian. It was a credit to writer Julie Rudd and producers Naomi Scott and Alex Saks who chose me because they thought I would bring more of a curious eye. I would be bring something unexpected to the film.  When I read it, it was so colorful and loud. Then I knew I got something to offer it.

What was your favorite scene to shoot?
I love the guys in the backyard.  It was the end of the shoot. It had been so chaotic. We squeezed in so much into a short period of time. We just scraped into the final few days and got to hang out in the background with the quiet stuff. That was nice.

What was the most difficult scene to shoot?
The action. The water sequences. I am a first-time feature director so I don’t know any different. My A.D. said to me, “You realize an action sequence like this sometimes takes six days to shoot.” We shoot it in one night. We had six boats in the water so that was amazing to coordinate as a director. We had three cameras on the water, safety boats and stunt doubles. It was the most difficult but definitely the most rewarding. I loved it. I want to do more action.

What did you like most about the script?
I realized there was a soul.  The script had a soul. Julie Rudd was so caring and loving with her characters with the way she spoke about them. A lot of people initially compared the film to Bad Moms and I think Bad Moms is a really special film. I think Fun Mom Dinner occupies a loving space, like a hug. It holds its audience in an embrace.

What were the biggest challenges in making this film?
I have a lot of really big actors in my film that I have grown up watching and admiring. That was a surprise for me. You don’t learn that in film school. There was not a class in film school about working with people that you are in an awe of.  It was a glorious challenge.  They are really special and they kick *** at their jobs.
Another challenge was we shot the film so fast.  People would think this was shot in 30 days or maybe 40 days. It was 19 days. It was tough. I’m still growing as a filmmaker. Another challenge was working with a huge ensemble. From a technical point of view, thinking about how to cover a scene. You are just not covering dialogue. You are now covering eyeline. Toni Collette doesn’t have one close up in a scene. She has a close up facing Molly Shannon. She has a close up facing Bridget Everett. She has a close up facing Katie Aselton. As a filmmaker at the start of my career, it was new information to process.

Who or what are your influences? Do you think these influences shaped this film and if yes, how?
Initially, I responded to Wes Anderson and his love of production design, texture, and color. More recently, I have been embracing Billy Wilder as a filmmaker. I have been watching Billy Wilder since I was a kid. As a director, I have been appreciating how he jumps genre, what he does with the camera and how sparkling and watertight his dialogue is. The Coen Brothers are a big influence for this film. For example, once the women get into the evening scenes, we change the way that we use the camera. If we had more money, we would have swapped the lenses and would have gotten an entirely different lens kit for the night stuff. For blocking, I thought about how the Coen Brothers would block things within a scene - how a wide long shot can suddenly become a close up without an edit point, moving the actors closer to the camera.

Do you have any favorite behind-the-scenes moments or stories you could share?
Actor John Early. He begged to be in the film because Toni Collette was in it. His agent rang up and said he will do anything. What can he do to be in a scene with Toni? I did not know who John was at the time. Naomi Scott had worked with him. She said he’s the funniest person you will ever meet. He rocked on set. He was so open and available to me. He and I went off to the side, started working on his character and created an unexpected self-conscious bartender. It wasn’t on the page. We drew it out together. It was a joy to work with him and to be with someone so open. He made everybody laugh. He made Toni Collette crack up.

Your film had its world premiere at the Sundance Film Festival. How did you find the festival experience?
Great question. I have been doing festivals with my short films. I have been trying to get into Sundance for years.  They wouldn’t take my shorts. They tried to put me in the directors’ labs.  They were like, “We passed your short films around and think they were amazing.” Yet, they still they didn’t put me in the festival. I began joking that I had to make a feature film to get in.
When we got into Sundance with Fun Mom Dinner, I was terrified. We had this big, broad comedy. I was nervous that I would be picked on by the big, cool filmmakers for taking on this commercial affair to Sundance. Toni Collette wasn’t available on the first week to be at the premiere. We chose to premiere on the second week and all the industry had gone home. All we had was a huge cinema full of people who wanted to be there, film lovers, not necessarily filmmakers. We made this film for mothers, fathers, and women. They were all there and they loved it. Naomi Scott turned to me during the screening and said, “This is our people. This is our family.” It was a beautiful surprise. It was received so well.

Fun Mom Dinner comes across as a movie about female friendships, middle age, and marriage. Can you comment on what you hope comes across, in your film, about female bonds, middle age, and marriage?
In terms of female bonds, it is important for me as a filmmaker and as a woman to portray friendships between women that are not competitive. I am really sick of seeing that. That is one thing we wanted to do with this film.
Middle-age: To show women and men, mothers and fathers have identities outside of their roles in society. I really thought it was important for Molly Shannon to play the single mom, to play Jamie. On the page, she was initially younger and the conventional, modelesque single mom. Instead, I wanted to convey the journey of the single mom who is not in her thirties.
Marriage: This film looks at identity outside the traditional role of a wife. We always see men cheat on women in films. I love that we explore fidelity in this film in a gentle and loving way. I love empowering my characters to do that.

What would a Fun Mom Dinner-like night for you look like?
I am not a mom, but I have three dogs. My Fun Mom Dinner is getting together with your tribe. My Fun Mom Dinner is hanging out with writers. I am a bit of an introvert. It’s not a night thing for me. It’s an afternoon. I have this “craftynoon” with my friends. We craft. We eat. We bring food and we all work on our own different crafts. For me, it’s cross-stitch from Etsy. We talk gentle s*** about each other’s crafts. We talk politics. We talk literature.

What’s the best filmmaking advice you’ve received?
Listen to everyone and know when you are right.

If you had infinite resources and budget, what is a fantasy project you would like to tackle?
A musical. I am on a studio movie at the moment. It’s ironic because it is a studio film so you wouldn’t think that it would be crafty and colorful. The executives are like, “Get weird, surprise us.” There are musical numbers in it. I’m in heaven.

What’s next for you?
I have a studio film and after that, a big musical. I’m also a choreographer, but I won’t choreograph it. It’s a very big, traditional musical. It is pretty close to my soul as a filmmaker.