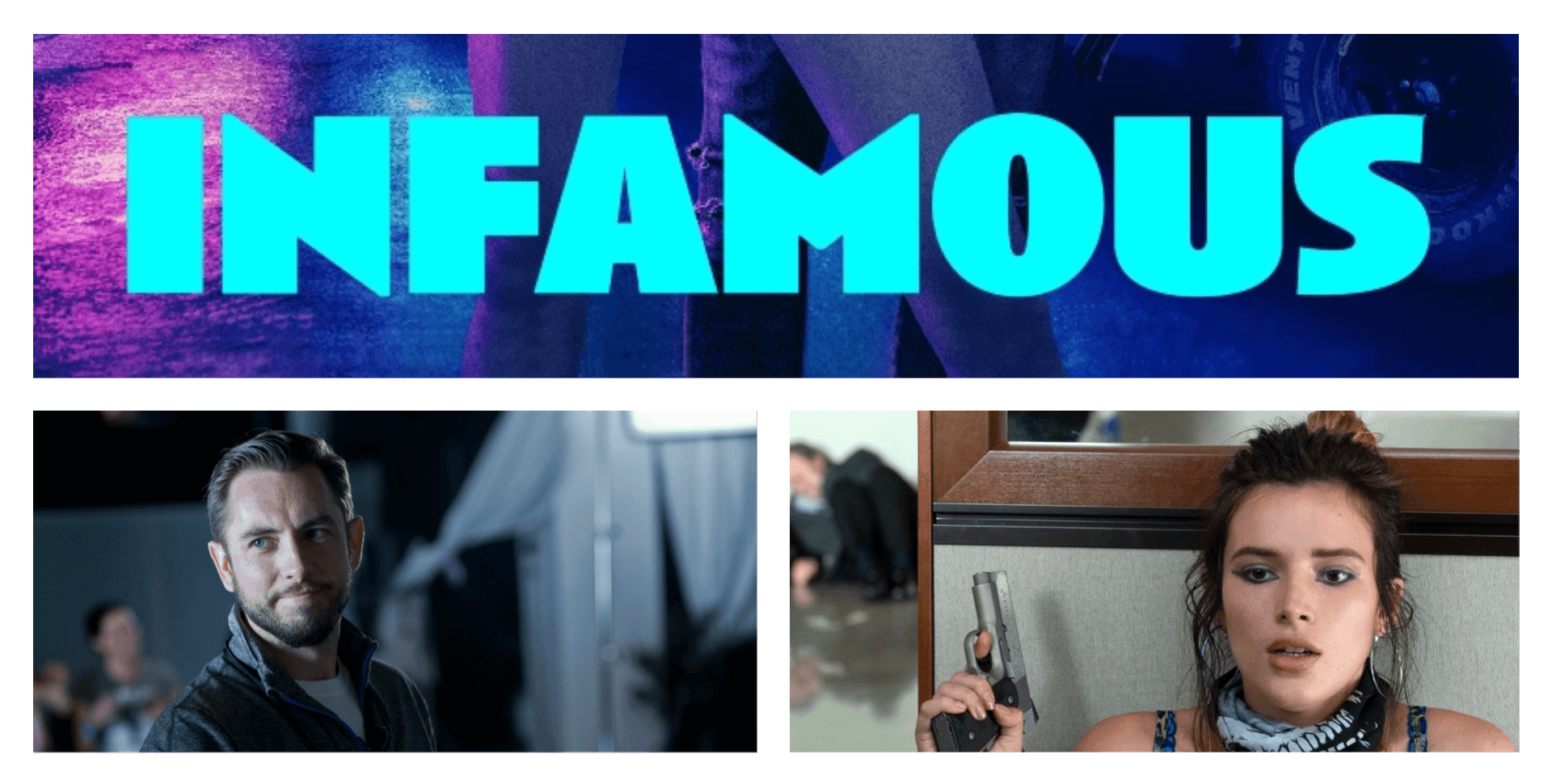 Written and directed by Joshua Caldwell, Infamous follows the story of a young and reckless couple (Bella Thorne and Jake Manley) who decide to broadcast their crime sprees live on social media and gain infamy in the process. In a recent interview with Borrowing Tape, Joshua Caldwell expanded on directing and writing the fast-paced crime movie, Infamous⁠ — which is available to watch via purchase via Apple TV and Amazon.

What was the inspiration behind your feature film, Infamous?

I was interested in the intersection of social media celebrity (and the currency of likes and follows) with violence and crime. America is fascinated by crime and always has been. The local news is full of it, it's what sells, and so that felt like a natural, if not inevitable, fit with the pursuit of fame at all costs.

The framework of committing crime in an effort to get likes and follows and build celebrity was both ridiculous and not that far-fetched. It used to be that we had gatekeepers who determined who would get attention and who wouldn't. But that's all gone now. With nothing more than a phone, anyone and everyone has the ability to create and reach an audience into the 10s of millions, if not more. And they never have to step out from behind the device. I was fascinated by that collision of celebrity and crime and I wanted to explore the most extreme version of it in order to ask how far would we as a culture be willing to go? 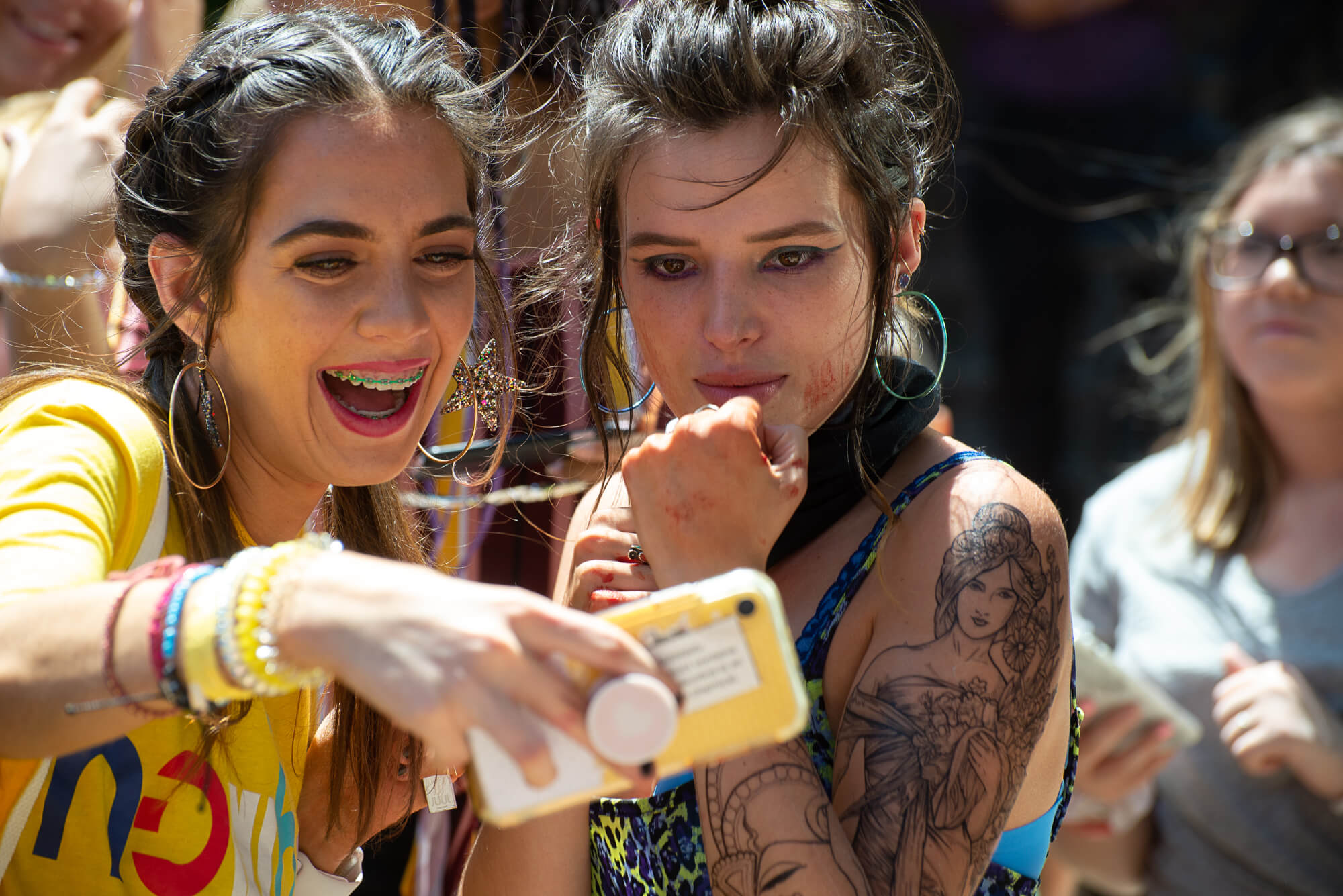 Did you plan on the ending with Arielle getting what she wanted all along (fame at a high cost), or did you find you got there organically when writing the script?

I knew I wanted to Arielle to win in the end because frankly, I think that's far more likely than for her to get her comeuppance. Think of who we put on a pedestal these days, think of who we support with our retweets and likes and follows. The value of social media is quantitative, not qualitative. So, if we hate-follow someone, or retweet something with a negative comment, you're still giving value to that person or that account. 80 million followers is 80 million followers. That number is the only thing that matters. And so, not wanting this to be some dour film about the dangers of social media, having her win and get what she wanted in the end felt like the only way to end the film.

After watching Infamous with Bella Thorne as Arielle, I could not imagine anyone else in her position because she perfectly embodied the role. What was the casting process like?

Honestly, it was fairly simple. One of our producers, Scott Levenson, knows her manager and heard she was looking for projects that were aggressive and different from younger writer-directors and gave him the script. He read it, passed it to Bella, who read it, and loved it. We had a call a week or two later and after that, she was on board.

When I wrote the film, Bella was certainly a paradigm for Arielle. I was creating an intentionally unlikable, unsympathetic character and I know there are a lot of actors who wouldn't want to play that. Bella felt like an actress that would take a risk like that and she was. She attacked the role unapologetically and without any degree of self-consciousness. And I agree, I can't imagine anyone else playing Arielle. 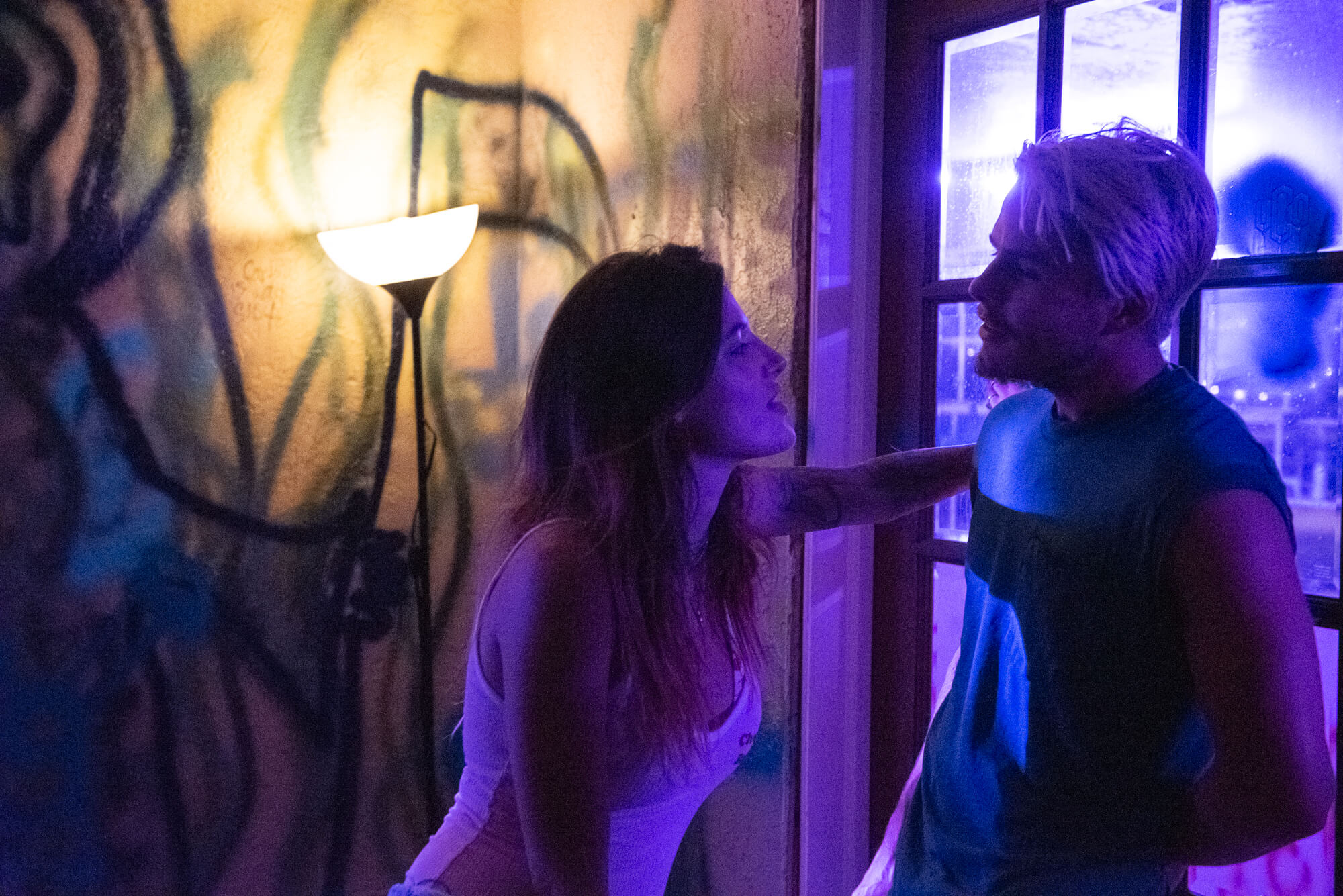 How was it working with Cinematographer Eve Cohen to create the visual aesthetic for Infamous?

There are so many things I love about Eve. She's at once an artist and a brilliant technician, and while she's steeped in the knowledge of traditional cinematography, she also works a lot in the documentary world (where you often have less control over light, etc). So, all around, she's fantastic and she doesn't bring one single approach to a scene. She takes everything in: what's the intention of the scene, what do we want the audience to feel, how much time do we have, how long is this shot or scene going to be up on screen; and then comes up with a solution on how to get it done. So there were times when we did extensive lighting set ups, and there were times where we were just running around with the camera, using what was available. I love the flexibility of that.

Beyond that, it was a solid collaboration. I'm a highly visual director and so I very much have an approach to the film I want to take. And then I lean on her to make it happen. For Infamous, we really wanted to make it a subjective experience for the audience, to show things from Arielle's point of view. The idea was: the movie you're watching is a version of Arielle's social media feed. Everything you're seeing is what Arielle wants you to see and how she wants you to see it. So, there's a bit of a fantastical element to it. And we wanted to mimic the way in which people consume content now. Everything in the social media world is self-shot, so it feels very gonzo and it's also had filters applied so it's very colorful and bright. Bringing those aspects into the filming and still making it cinematic was the challenge. But what Eve brought to the image was more than I could have hoped for.

In the film, the audience gets to witness the sprees from the perspective of their fans with all of the glamor and thrills, and on the other side of the coin, the madness and destruction of the actual crimes. How did you find the process of working with Editor Will Torbett to reach that balance?

This is the fourth feature of mine that Will has edited so at this point we're a finely tuned machine. He knows what I'm going for and the peculiarities of how I want scenes put together. On the other hand, I also try and give him a lot of freedom, especially with the first cut, to experiment and try things that I might not have thought of. And he's clutch when it comes to montages, which are not easy to edit especially because we had an enormous amount of material to cut from. In addition to the footage from the Alexa, we also shot a ton of stuff on iPhones. I knew doing so would 1) work in the film because we understand it to be from Arielle's perspective and 2) give us much more breadth and scope to the film. So, I would often shoot footage to and from set, collecting sunsets and sunrises, highways, overpasses, signs, bridges, farmland, whatever I could get. Will's ability to sift through all that and bring it together in an exciting way is why I loved working with him. 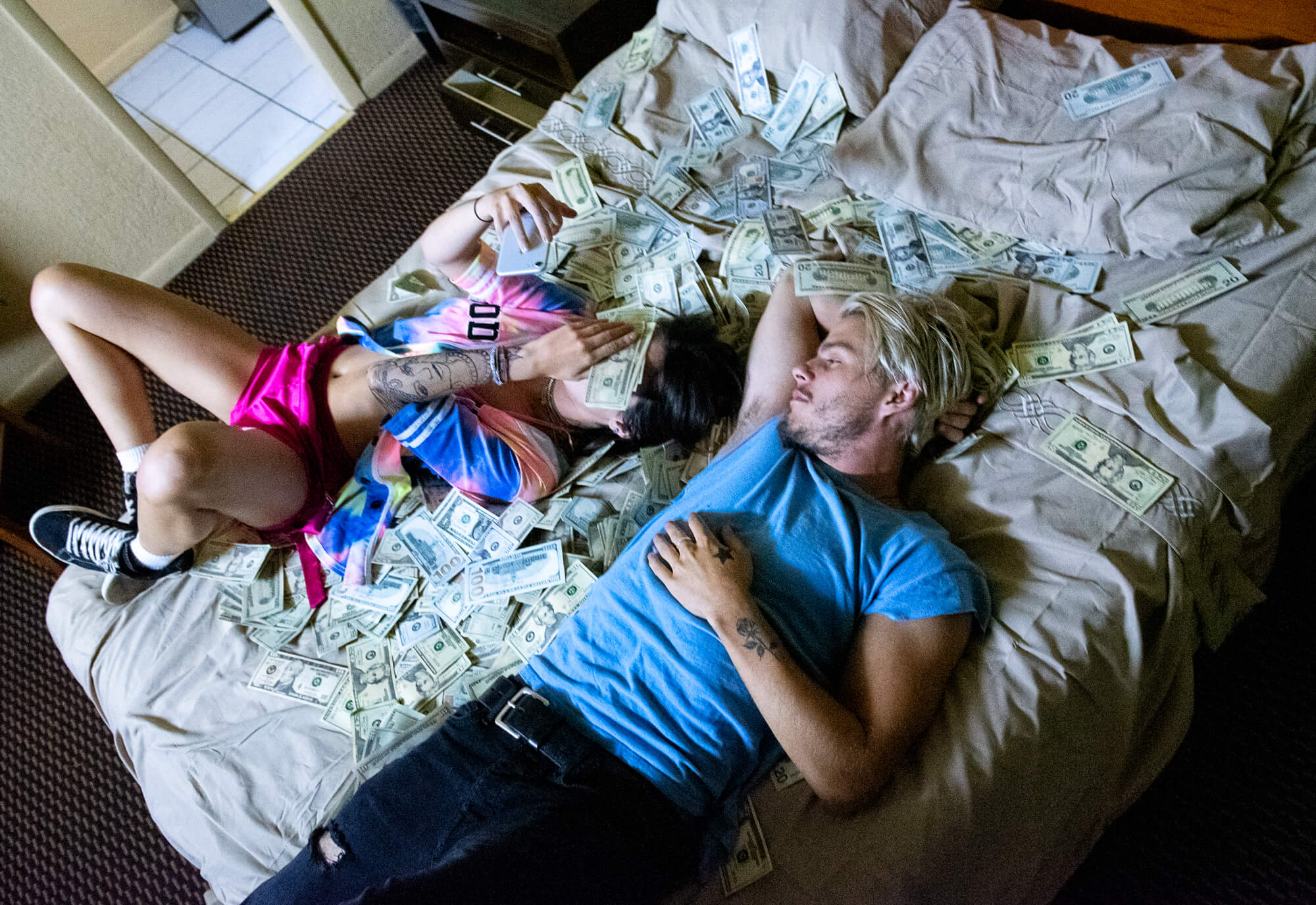 The music in Infamous is a chef's kiss! How was it working with Bill Brown to get the right sound for the movie?

This is my third feature film working with Bill (not including numerous short films and digital projects) and it's always a pleasure. Bill is such a craftsman when it comes to the score and even when I'm not looking for a piece to be emotional, he somehow finds a way of slipping it in there and deepening whatever I intended. I was adamant about Bill's involvement in the film because music is such a tough thing to bridge. I'm not musical, so Bill has to translate my description of what I'm going for into notes. We have the benefit of years of working together and understanding each other so much so that much of what he puts down in his first pass on a cue ends up in the final score.

What films/directors have had the biggest impact on your filmmaking and for your feature film, Infamous, and why?

I tend to like films and directors that really try for something different, even if they fail. I feel like so many movies today, you know the story, the beats, the plot, before you ever watch it because they're all following the same structure. It's the same movie, over and over again, just dressed up differently. So those directors that push things into a new direction really resonate with me. I'm a huge fan of Michael Mann, Steven Soderbergh, David Fincher, Paul Greengrass.

With Infamous, I really tried to bring to it a style and approach that was wholly me and not in reference to any other director or any other film. This is my fourth feature, not to mention the numerous shorts and digital projects I've directed, and I've reached a point where I know what I like and how I like to shoot. Beyond that, we took a lot of our cues from looking at social media and online content more so than cinema.

What's on the horizon for you?

Obviously, COVID-19 has brought everything to a halt. And even with states and industries opening back up, I suspect it may be some time before I find myself back on set. I've got a number of projects in the works, nothing I can talk about publicly yet, but I'm taking the time right now to really focus on developments and the scripts to make them the best that they can be. It's an enforced pause, which is kind of nice because so often you find yourself racing towards production, and here we are with nothing else to do except write and get it in the best shape possible.