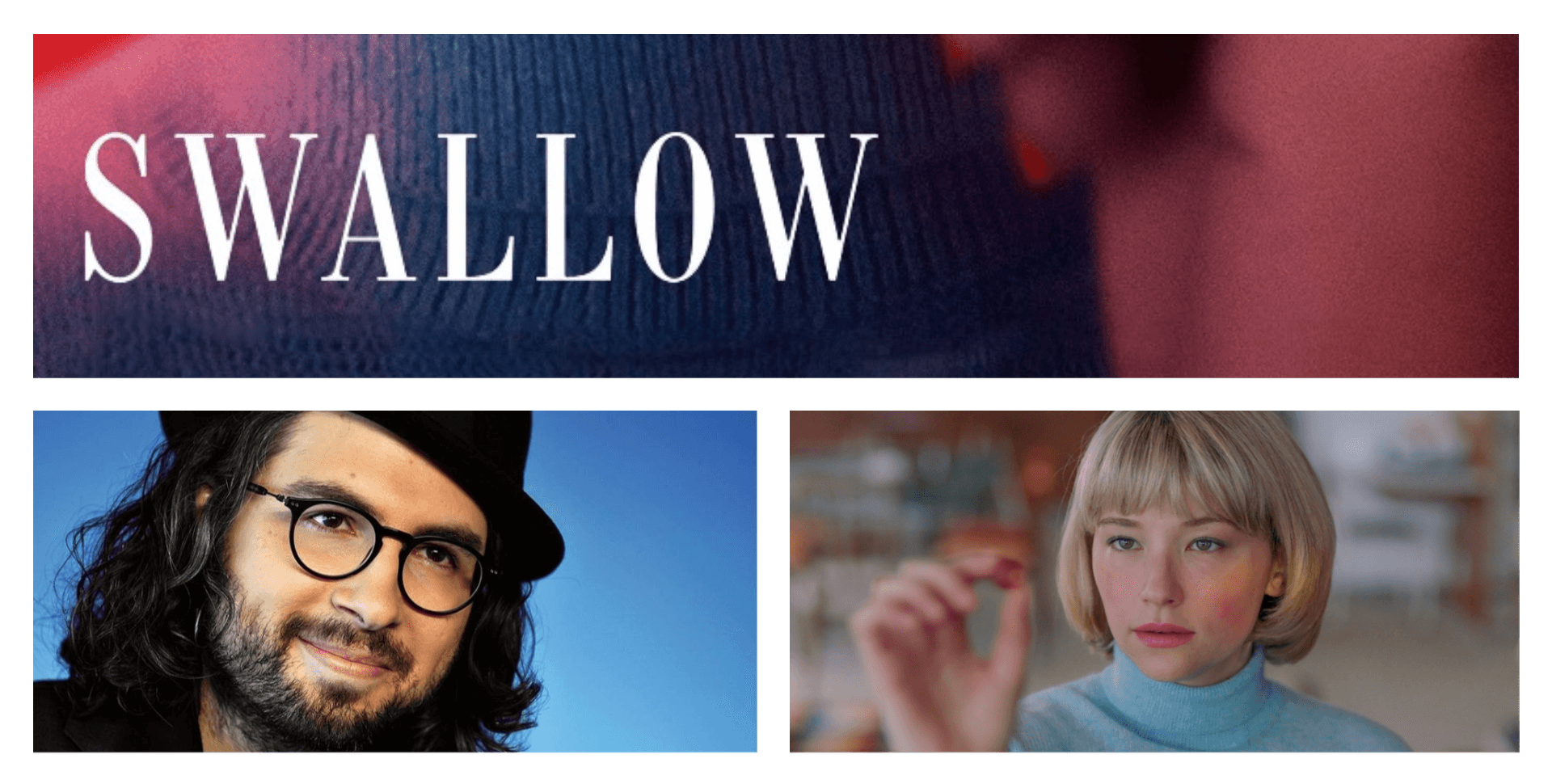 Swallow follows a young softly-spoken newlywed housewife named Hunter (Haley Bennett) who is married to her wealthy husband Ritchie (Austin Stowell) when she finds out she's pregnant. This unexpected news makes Hunter spiral, as she grapples with the urge to ingest inedible and life-threatening objects, such as thumbtacks, metal figurines, and batteries.

At its very core, Swallow is a sincere and thoughtful portrayal of a person struggling with the pain of unresolved trauma, which manifests in the form of an unhealthy coping mechanism ⁠— pica disorder. While a less capable director would lean into sensationalism and exploitation, Carlo Mirabella-Davis masters the art of directing with subtly and compassion in Swallow (IFC Films). In a recent in-depth interview with Borrowing Tape, Mirabella-Davis graciously shared his experiences in writing and directing Swallow - which is available to purchase and watch via digital on-demand.

Watch Swallow via Amazon or iTunes

What inspired you to write the screenplay for Swallow? How did you find the writing process?

Swallow was inspired by the life of my grandmother, a homemaker in the 1950s in an unhappy marriage who developed various rituals of control. She was an obsessive hand-washer who would go through four bars of soap a day and 12 bottles of rubbing alcohol a week. I believe she was looking for order in a life she felt increasingly powerless in. My grandfather, at the behest of the doctors, put her into a mental institution where she was given electroshock therapy, insulin shock therapy (the inducement of medical comas), and a non-consensual bilateral lobotomy which resulted in the loss of her sense of taste and smell. None of these treatments cured her OCD. I always felt there was something punitive about the way my grandmother was treated, that she was being punished for not living up to society’s expectations of what they felt a wife or a mother should be. I always want to make a film about that.

As I started writing, however, I realized that handwashing is not very cinematic. Perhaps it will become more cinematic now that we are all obsessively washing our hands! Anyway, I remember seeing a photograph online of all the contents of a patient with pica’s stomach. The objects had been surgically removed and fanned out on a table like an archaeological dig. I was fascinated. I wanted to know what drew the patient to those artifacts. It almost seemed like some kind of holy communion, like a mystical experience. I wanted to know more.

Did you make any edits on the screenplay or film, due to the graphic nature of Hunter's Pica Disorder?

In terms of content, I wanted to walk the proper line between being authentic to the visceral nature of Hunter’s compulsion while also weaving a heartfelt, respectful portrait. My hope is that nothing in the film feels gratuitous, but rather, motivated by an honest, unflinching portrayal of Hunter’s experience.

As far as edits to the screenplay or film, nothing was omitted. There were prospective investors who offered us financing if we removed certain controversial elements, but my amazing producers, Mollye Asher and Mynette Louie declined their offers and sought funding elsewhere. Excellent producers will fight with everything they have to preserve the integrity of the project. 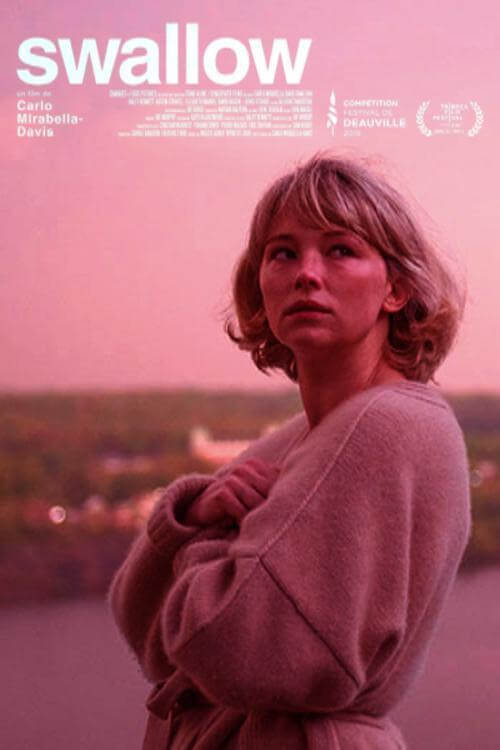 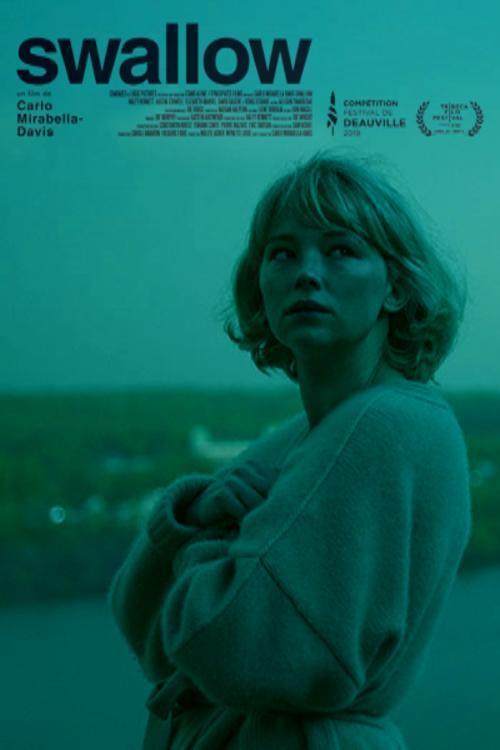 What was the casting process like for Swallow? How were you able to help actor Haley Bennett in her realistic portrayal?

Allison Twardziak, our marvelous casting director, did wonderful work pulling together a truly phenomenal cast. Early on, we knew that we needed an incredibly skilled lead actor to play Hunter. The narrative clearly required a performer with the capacity to empathically usher the audience into their internal cosmology. Allison suggested Haley Bennett for the role. I watched Haley’s incredible performance in The Girl on the Train and wrote her a letter offering her the part. Haley and I had an instant artistic bond at our first meeting, a shared dedication to creating impactful, daring work. Haley was also an Executive Producer on the film and invested every iota of her soul into the project. Haley brought Hunter to life with such power, clarity, authenticity, and innovation.

In terms of fostering an effective performance, I believe a director should learn how an actor likes to work so the adjustments you make are in keeping with the way that actor is trained and how they engage with the process. Even though you are behind the camera, you need to foster a spiritual bond with the character. I endeavored to feel everything that Hunter was experiencing in a scene just as Haley was feeling those emotions. That way, Haley and I were able to astutely confer about the nuances of what a scene needed because we were on the same empathic wavelength.

Swallow is a captivating film with superb cinematography. How was the process of working with cinematographer Katelin Arizmendi to devise the aesthetic for Swallow? How were the setting, house, furnishings, and other visual motifs utilized?

Thrilled you feel that way! Kate is a truly ingenious renaissance painter of the silver screen. She has an inspired talent for elevating psychological subtext through her daring compositions. Kate and I developed a rigid vernacular of camera direction, a strict set of rules that Kate would then break at key emotional junctures in the film.

For example, Kate uses a lot of formalistic, locked down master shots in the beginning of the film where Hunter is lost in the frame or dominated by the space. Then, all of a sudden, Kate will cut in for a shallow depth of field close up in order to pull us into Hunter’s experience.

There was an amazing synergy on set between all our design departments. Our incredible production designer, Erin Magill, is a true aesthetic mastermind, and our amazing costume designer, Liene Dobraja is a phenomenal artist deftly expressing how characters feel through what they wear. Erin and I were dedicated to the idea that the interior design of the house should reflect Hunter’s attempts to fulfill the controlling family’s expectations, but her true taste occasionally emerges, like when she puts the red gel over the baby’s room window.

What were your favorite and most challenging scenes, being on set and during post-production?

Interesting question! One of the moments I’m proudest of is the thumbtack sequence. It involves a great deal of storytelling through Haley’s stunning performance, Kate’s meticulously choreographed camera direction, Nathan Halpern’s gorgeous score, and Joe Murphy’s phenomenal editing. There’s a real dance of synergy between all those arenas of creativity that convey a very complex range of emotions and psychological movement within a relatively short period of time, all without dialogue.

In terms of post-production, my amazing editor, Joe Murphy, and I, were faced with an interesting challenge about the opening of the film. In the script, the film opens with lambs being prepared for their eventual transmogrification into food. It is meant to serve as a Buñuelian opening where the theme of hidden oppression is established. When we got into the edit, Joe and I quickly realized that by opening with the lambs, it took too long for the audience to get introduced to Hunter. We cut the lambs out and began the film with Hunter decorating the house.

We encountered a new problem, though. Now, the audience wasn’t properly prepped for the horror/thriller tones in the film. After that, we tried cutting between the lambs and Hunter in the house. Joe, my producers, and I were delighted by how cross-cutting between the two situations created a new, powerful metaphor, symbolically associating Hunter with the lambs, kindred entities being sacrificed in the service of a controlling, patriarchal system. Thus, through the magic of editing, a new meaning was created beyond what I originally intended in the screenplay. That is why you need a brilliant editor, like Joe Murphy, who can fine-tune the vision of the film after the shoot has concluded.

What films/directors have had the biggest impact on your filmmaking, on your film Swallow, and why?

I’ve had a lifelong obsession with motion pictures. In college, I used to watch five films a day, but I had to cut that back in order to get some sleep and make a few movies of my own. There are many movies and directors which have fascinated me over the years, but a few of the pivotal ones would be Chantal Akerman, whose groundbreaking films Jeanne Dielman and La Captive were big influences on Swallow. Ackerman‘s expert control of what you see and don’t see is always mesmerizing. The movie The Night of the Hunter was an important influence, all of Hitchcock’s films, especially Psycho and Vertigo, Brian de Palma’s oeuvre, the fascinating, mesmerizing films of Claire Denis, Douglas Sirk’s color palettes, Wong Kar-wai’s profoundly powerful work, Pedro Almodóvar’s intense, brilliant narratives, the evocative body horror of Cronenberg, Carpenter’s The Thing, and of course the haunting tapestry of Dario Argento’s design, the original Suspiria in particular. A Woman Under the Influence was an important touchstone for us, as was Todd Haynes’ incredible film Safe, and David Lynch’s psychologically rich, phantasmagoric worlds.

I’m also greatly inspired by Jorden Peele’s commitment to socially relevant horror. I actually went to high school with Jordan who showed me The Shining and Akira for the first time. I’ve followed his brilliant creations with awe ever since.

What do you hope audiences will take away from the film?

Swallow is a film about a woman who is constantly being told who she is, what she should want, and where she belongs. The more time she spends in this controlling, patriarchal family, the more she begins to sense there is something sinister lurking beneath the surface. Hunter represses her misgivings, putting on a grateful countenance, but her swallowed feelings emerge in the form of the pica compulsion. The compulsion is dangerous, yes, but it also serves as a kind of catalyst that allows her to rebel from this controlling paradigm and discover her true self, the life she wants to lead. Sometimes a breakdown can be a breakthrough because it alerts one to various patterns or traumas that needed to be addressed. I hope Swallow is a film that makes people feel seen.

I’m currently working on a feminist supernatural horror movie as well as several other feature film projects and television show concepts. I hope to continue making movies with fascinating collaborators who are committed to bold, psychological, heartfelt filmmaking that challenges convention and explores stories, characters, and images we haven’t seen on the screen before. I believe that movies can increase empathy, fight prejudice, and bring us together. I want Swallow and my future work to be considered part of that movement.