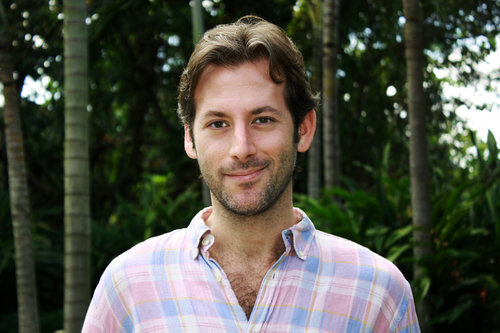 Joshy [2016] is writer/director Jeff Baena’s sophomore comedy-drama feature following his horror-comedy debut Life After Beth [2014]. After an abrupt change to his life, Josh (Thomas Middleditch) and his friends gather at a vacation home in Ojai, CA when they find that their deposit is non-refundable. The result is, unsurprisingly, mostly shenanigans, but amidst that is also emotional catharsis. Joshy [2016] premieres on Aug 12, 2016. Recently, I was able to ask Jeff some questions about his upcoming film and below is a Q & A detailing the exchange. For full disclosure, it contains very mild spoilers; so, for the spoiler-averse readers, be sure to watch the film first.

What made you want to tell this particular story?

What was your favorite scene to shoot?

Without spoiling too much of anything, I loved shooting the scene where Jenny Slate asks Adam Pally if she can borrow his toothbrush in the morning after having spent the night in his bed.  Also, I loved working on the scene where the two of them have a serious discussion at the bar on her birthday. Both scenes came from such a vulnerable and honest place, and both Slate and Pally were transcendent in their performances.

What was the most difficult scene to shoot?

The scene that takes place outside of the bar where we meet Jenny Slate for the first time was a nightmare because it was legitimately freezing outside and nobody was properly dressed for it. We were dying.

What was the process of assembling an ensemble comedic cast like this and what was it like working with them? Did the cast improvise at all and if so, how much of the film would you say is improvised?

Pally was onboard from its inception as we play basketball together on the weekends and had discussed working on this idea for three or four years. The rest of the cast was composed of performers I had known either well or in passing. As the film was primarily improvised in terms of dialogue, I sought out performers who came up with UCB or had experience with a similar style of filmmaking.

The process was truly collaborative and incredibly rewarding. Also, by shooting in order as much as possible, it allowed us the opportunity to flesh out storylines that developed within the scenes. Coming from a writing background, it was liberating to let go of the constraints of a script and force myself to be present in the moment and recognize what we were creating as it was happening. It also helped that many of the performers are also writers themselves.

What is your favorite improvised scene, joke, or line?

I always laugh whenever Alex Ross Perry tells Nick Kroll that he appreciates but will have to decline the offer to sleep with a hooker Kroll procured and that he’s sure they’ll have fun having sex with her one after the other.

This film largely feels like a hangout film where this group of friends seems to meander from one activity to the next. In making this film, how much of the story is planned prior (e.g. storyboarding) and how much of it is crafting it in post-production? How did you decide which events would go where in your film?

I wrote a 20-page scriptment that we adhered to conservatively. Given that we had only 15 days to shoot it and had a minuscule budget, there wasn’t a lot of footage that didn’t end up in the film. I had to be efficient and economical with my time. My editor Ryan Brown and I then made sure the tone felt consistent and grounded. Sometimes we had to cut bits that were hysterical but undermining the overall progress of the film.

Who or what are your comedic influences?

Who or what are your dramatic influences?

Was Lauren Graham’s role meant to be a cameo only? If yes, how do you know her? If no, what was her role supposed to be?

We had shot a few more scene than the one that made it, but her schedule prevented her from being in a crucial scene that rendered the rest invalid. It’s a real bummer because she’s such an amazing actress.

How were you put in touch with Devendra Banhart to work on an original score for this film? What was it like working with him and what kind of challenges did you come upon in regard to the music used in this film?

I’ve been a big fan of Devendra’s work for years, and he immediately came to mind when I was considering the score. My music supervisor Chris Swanson reached out to Devendra’s manager. Devendra loved the film and signed on immediately. It helps that he’s a huge comedy nerd. Collaborating with Devendra and his team (Noah Georgeson and Joe Steinbrick) was a dream. There were the initial growing pains which one encounters when a musician has never created a scored before: namely, learning how to create music which complements the film as opposed to a work which exists in and of itself. Luckily, I had been through a similar process with the Black Rebel Motorcycle guys on ‘Life After Beth’ and knew how to navigate those waters a little better.

How do you know Alex Ross Perry?

I met Alex when Joe Swanberg invited him to join us at dinner one night, and we became fast friends. We’d play Scrabble against each other whenever we were in the same town.

On Alex Ross Perry, have you noticed that your film and his last film somewhat share a premise in that they both involve a central character who has recently come out of a relationship (albeit very differently) who then ends up going away to a vacation home with, in your case, a group of friends and, in his film, a single old friend? Yours and his films end up reaching very different endpoints, though. Do you think there’s any inherent therapeutic value to this notion of, amidst trying times, going away with friends or do you think that a character like Joshy ultimately has to make his own mends?

Recovering from trauma is such a specific and personal process that I’m not sure there is any right or wrong place to address it. But, Thomas Middleditch’s motivations in ‘Joshy’ are not that conscious and direct when it comes to confronting his loss. It’s less a gathering of close friends there to help him get in touch with his feelings and more a misguided shit show where everyone is trying to avoid the elephant in the room while bracing themselves for the inevitable emotional breakdown.

I would love to remake ‘Capricorn One’ since the idea far exceeds the execution in the original.

What are you working on next?

I just locked picture on a feature I shot this spring in Tuscany tentatively called ‘The Little Hours’ with Aubrey Plaza, Alison Brie, Dave Franco, Kate Micucci, John C. Reilly, and Molly Shannon among others.

Joshy is out now on iTunes and select VOD platforms.