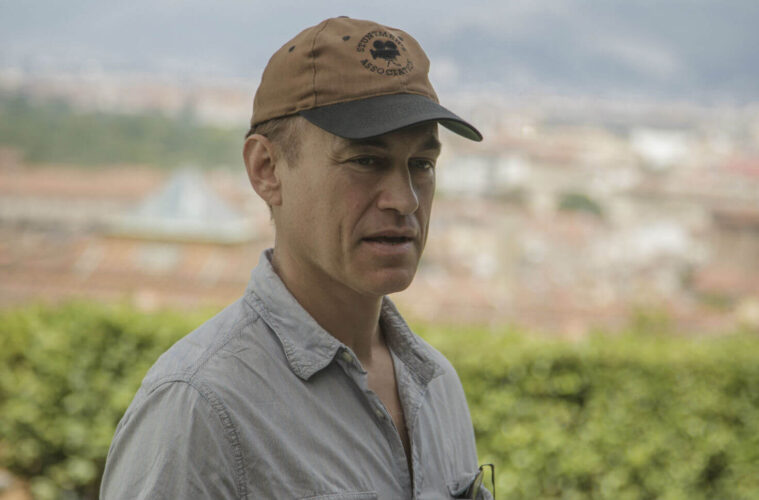 Evan Oppenheimer is a Writer and Director. Evan is known for Alchemy (2005), The Speed of Thought (2011) and A Little Game (2014). His latest film, Lost in Florence, takes place in the iconic Italian city. The story involves a heartbroken football star named Eric Lazard who becomes involved in an ancient and dangerous Florentine sport. Furthermore, Eric meets a local woman named Stephanie, during his stay in Florence. All of this whilst juggling his relationship with his cousin Anna, who teaches the Italian language to foreigners.

Can you explain the themes in Lost in Florence?
Eric has his expectations of what his future will be: he’s going to get a shot at being a professional football player, he’s going to have a life with his great love Colleen – in today’s world, we’re told that (if we work hard enough and fully commit ourselves) we’ll achieve our goals. But Eric learns that that’s not necessarily true. Sometimes things don’t work out the way you expect, as he says towards the end of the movie. Sometimes you have to recalibrate your goals, decide what’s really essential and what’s not.

What was the reasoning behind setting the film in Florence?
Long ago, I saw calcio storico being played in Florence, and that was the initial starting place for the film. Once the plot revolved around calcio storico, there was really no choice but to shoot it in Florence. We did briefly consider shooting most of the film elsewhere, and only shooting a few exteriors in Florence (for budgetary reasons), but, with the cooperation of the Tuscan Film Commission, we ended up filming the whole movie in Florence. Which was, in hindsight, the only proper outcome.

Did you gain inspiration or influence from film, literary or other artistic mediums for Lost in Florence?  Can you give examples of these influences and how they helped to shape the vision you had for the film?
Any film about an outsider in Florence operates in the shadow of “A Room with a View”. I saw that film at a formative time in my life, and it probably inspired my initial trip to Florence. We wanted to show the beauty of the city (as that film did), but do so not just through the eyes of a foreigner, but also from the perspective of the locals. Visually, we were inspired by the Italian romantic painter Alessandro Magnasco. Specifically, the night scenes and action scenes of the movie reflect an appreciation of his landscapes, which feel as if they capture a very specific moment in time while also creating a strong sense of motion and fluidity.

In what way do both writing and directing a film affect the process for you?
At some point, a writer/director has to take off the writer’s hat and put on the director’s hat. When you’re writing the script, you can describe a pair of shoes as brown, or green, or wherever your inspiration takes you. Once you’re shooting the movie, you can’t have that kind of flexibility. Every person working on the movie views the screenplay as being, for the length of the shoot, the “bible”. If the script says green shoes, then the art department will seek out a few pairs of green shoes to choose from. They won’t show up with red shoes because the script specifically says green shoes. If I’m still thinking as a writer, maybe I say, “you know what, the shoes could also be red.” If I do that, I’m undercutting everyone in the movie, because they need to know what their jobs are, they need to know what their task is. (Of course, I also believe in the importance of flexibility – so finding the middle ground between constancy and flexibility is one of the main challenges of being an independent film director.)

Would you consider taking on a project where you had to undertake sole responsibility of one aspect of production?
I come from a guerrilla filmmaking background. So the smaller the crew, the happier I am. On my prior film (“A Little Game”), I decided that I wanted to shoot a coda for the film, a short scene that could go in the middle of the end credits. So I went out with one of the producers (who had a camera that he knew how to work) and two actors, and we shot the scene by ourselves. And the scene turned out wonderfully. Of course, it helped that one of the actors was an Academy Award winner…

Is this a particular genre you would be curious to explore in the future?
Of course, it was a pleasure to shoot in Italy, and I’d be glad to so again. I’m not sure I’ll ever make a movie quite like this again, though. It’s really a young man’s movie, a movie about trying to decide what you’re going to do with your life, and who you’re going to do it with. That’s the place I was at when I started writing this movie. I’m now at a different place. So, while those are concerns that I suppose we always come back to, I’d be surprised if I ever make a movie quite like this one in the future.

If you had infinite resources and budget, what is a fantasy project you would like to tackle?
There’s a book called “The Last of the Just”, which is about the Jewish legend that there are, at any one time, thirty-six people on earth, righteous souls, who justify mankind’s existence. This novel follows the lives of these “just men”, the last of whom dies in the gas chambers of Auschwitz. Before I went to graduate school, I was a book editor at Atheneum Publishers. I asked the founder of Atheneum, Alfred Knopf Jr., what he thought was the best book Atheneum ever published, and he said “The Last of the Just.” In memory of Mr. Knopf, I’d love to make a movie based on that novel.

What is next for you?
I’m working on a low-budget, streets-of-New-York screenplay. I call it an art film because I’m not sure how commercial it’s going to be. It’s about a family of (hopefully) interesting New Yorkers, and what happens to them on one particularly significant day in New York. For now, it’s called “The Magnificent Meyersons”, and I’m hoping to shoot it this summer. With as small a crew as possible…

Lost in Florence will be released in theaters nationwide, on VOD
and all digital platforms on January 27, 2017.