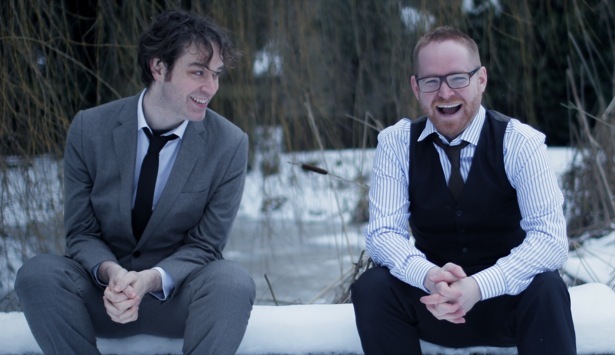 William Faulkner said that sex and death are at the front and back doors of the art world. If that's the case then the Blaine brothers should be right at home making movies. The Brothers' first feature 'Nina Forever' is a delightfully fucked up fairytale. Blood-soaked and sexy, the film tells the story of a newly-dead woman's attempts to ruin her ex-boyfriend's sex life as he begins to fall in love again. A sort of Zombie cockblock if you will. 'Truly, madly, deeply' it isn't.

Nina Forever is an oddball movie that's very sure of itself and what it sets out to say. At its heart, it's a story about love, grief and moving on, so it's not just tits and ass, and blood. If The Notebook is date-movie poison, Nina Forever may just be the antidote (or should that be 'anti-date'?). I got the chance to pick the Blaine Brother's brains.. (these things write themselves!) about the film and their careers.

Congratulations on the movie! My first thought after seeing 'Nina Forever' was "I have to know what these guys are into ...” So what (or whom) would you say were your biggest cinematic influences?

We might disappoint you I’m afraid! Everyone’s been surprised to find we’re not big fans of horror films. It’s been amazing to see how horror fans have taken Nina to their heart, but for us the story always grew out of that often ignored tradition of surrealism that has always run through British cinema. People like Powell and Pressburger, Lindsay Anderson, Dennis Potter, even the Pythons - that’s all been much more important to us than say Clive Barker or even American Werewolf. The fascinating thing is how many people pick up direct references to films we haven’t seen. Feels like we’ve unwittingly tapped into some shared experience, it’s nice.

I understand that part of the movie was funded via a Kickstarter campaign. Charlie Kaufman has said that he never wants to finance a film this way again. What was your experience like?

Thrilling. We raised just under half the money we needed in the last week of the campaign. One of the rules of Kickstarter is that if you miss your target you don’t get anything, we didn’t clear our target until the last three or four hours we had. It turned it into a real drama, felt like we had the whole of Twitter and Facebook cheering us on and when we finally crossed the line it was like we’d won the internet. We were always very sanguine though about how we wanted to use Crowd Funding. The money we raised on Kickstarter was essential to completing the film but it’s only one part of the picture, we were already making the film, so hitting out target just meant we could pay for one particularly expensive sequence. That attitude helped a lot, it made it a fun thing to involve people with rather than an awful obligation.

You are equally credited as Screenwriters and Directors. You both also edited the film. Does either of you have a preference for a particular role?

Not at all. To be honest we only recognize those roles because you sort of have to in order to communicate with other people. We tend to write like directors and direct like editors and edit like writers. In the end, you’re just telling a story or expression an emotion by juxtaposing pictures and sounds. It’s artificial to divide it up.

I saw nods to horror, comedy, romance, kitchen sink drama and the surreal. Yet you manage to present a film that doesn't just 'list off 'genres and influences. How were you able to balance elements of so many styles?

Though erotically charged and gory, the film (especially the ending) is tender at times. Did the emotional part of the story arrive organically or was it always part of the plan?

That was always there. We were inspired by our own experiences both of grief and of trying to care for people. Ironically though I think we’d have reached the same point had we started out more systematically as both horror and comedy rely on a real emotional connection to work. That’s why the best horror films work - it’s not just people being cut up and terrorized, it’s people you empathize with. Same with comedy, you have to care.

When I heard of the movies' premise I immediately thought of Life After Beth and Burying the Ex. Were you aware of their existence before you started on Nina Forever?

Not at all. Its funny, we shot back in 2013 and at that point everyone who came across the project would say “this is like nothing I’ve ever read ever…” but during the edit we had Warm Bodies, Life After Beth, Burying The Ex and It Follows all of which could be said to play in the same sandpit. Obviously, it was time for that idea…

The cast is fantastic in what must have been a difficult film to act in. Was there a lot of preparation or did you encourage experimentation on set?

Yeah we like surprises. We did a fair amount of preparation, especially for a film of this budget. However mostly that was work to develop trust and build the relationships between Abigail, Fiona and Cian, stuff that we hoped would give them the support they needed in order to then take the material somewhere fresh on set. For instance the first scene with Nina, we’d written that fairly slapstick - but rather than playing it screwball they all found a truth in it. It became slow and dream-like with the three of them mesmerised by each other and tangled up in fascination… it was totally unexpected and totally brilliant. We had to completely change the structure of the scenes building up to it, which led us to completely change how we edited the entire film, but it was worth it because it felt so fresh.

If you could adapt any existing piece of cinema, literature or theater into a film what would it be?

There’s a book we’ve been trying to get hold of for years. It’s sort of a sports movie but not quite how you’d expect. Would love to make that work one day.

Having watched Nina Forever and your previous short film Hallo Panda, it's clear that you aren't afraid to tackle such strange subject matter. Do you think your work will always have a touch of the unusual about it?

Most likely or at least… we always want to make the film that you want to go and see. There are some ideas that just put a glint in your eye. Stories that when you hear them there’s a sense that you have to go and see it just to see if it’s possible to have pulled it off. That’s the ones we like.

We once came up with the idea of shooting a sci-fi film actually in space and that’d still be tremendous. Like Gravity but with no CG. Not that this is a burning ambition but it’d be a fun way to use the infinite resources you outline… but constraints are good. Death is what makes life beautiful and it’s the same with all other restrictions.

What's next for the both of you?

We’re writing a new script we’re hoping to make soon. It’s sort of a thriller about an 82-year-old artist who is losing her eye sight and discovers someone is coming to kill her. We’re also signed up to direct a new script by Irvine Welsh and his writing partner Dean Cavanagh, that’s a female led heist movie in Leith.

Nina Forever is out now