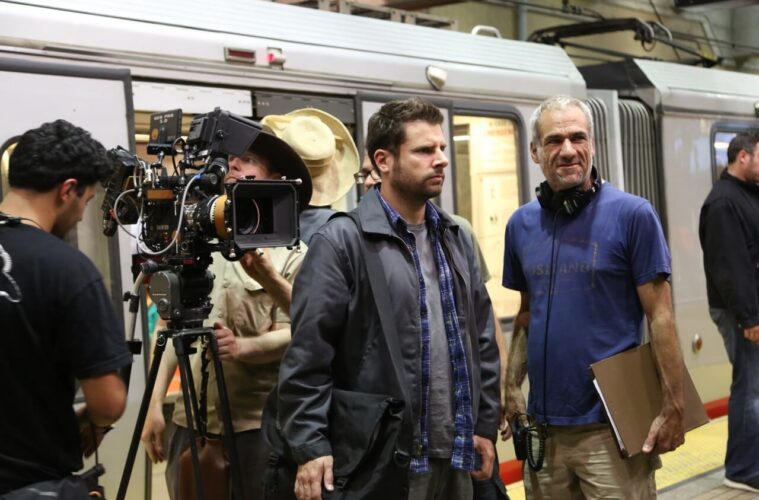 After directing several critically acclaimed shorts, writer-director Tom E. Brown is hitting the scene with his first feature length film “Pushing Dead”. The film is about a struggling, HIV-positive writer (James Roday) who gets booted from his insurance plan when he deposits a $100 check. That sentence alone could lead you to believe that this film is going to be some tear-jerking indie piece where someone dies. On the contrary, this film actually takes a comedic approach to a sensitive subject. Who knew a movie about America’s shitty healthcare system, gentrification and bureaucracy could be sincerely funny. With a witty script and excellent cast, Pushing Dead earnestly captures the struggles of being alive in today’s society.

How did you get into filmmaking? What and who are your influences?

I was about 10. My dad had a little 8mm crank that he had tossed into storage. I found it in the basement. I’d scrape together enough cash to buy a roll of film at Woolworth’s. Wow, I sound really old. I’m actually only kind of old. Anyway, I’d make little shorts, always shooting in sequence, editing in camera. That’s how I got started. It was fun. Still just as fun.

I love movies that have a distinct flavor, but nothing that tries too hard. It has to feel like an authentic voice. But I’m open to most flavors.

Tell me about your production process, both pre and post. What was most difficult in making this film?

The toughest thing was finding someone to take the risk. The money risk. AIDS comedies seem to make people nervous. Compared to finding the right investor, everything else seemed easy. And I’m not saying making a feature is easy. It was months of tough, exhausting work, but it was unbelievably fun, and our team was really good. I had a lot of talented folks around me. If you are going to direct a feature, surround yourself with good, talented people you trust.

I think it’s interesting that the movie itself is a cocktail, a perfect blend of pathos and dark humor. What made you go the black comedy route as opposed to a drama? Why did you want to tell this particular story?

I’ve been HIV-positive for 31 years, so I wanted to share a little bit of that journey. Life is just funny to me. The most interesting stuff in the world is the stuff that’s sad and funny at the same time. If life with a life-threatening illness was just sad, I’m sure I would have keeled over a long time ago.

Tell me a bit about the casting process. How’d you get James Roday on board as the lead? I love the relationship between him and Danny Glover - an odd, but affectionate pairing. Also, the chemistry between the ensemble is all around is great and just creates this authentic feel to the film. Was there time for everyone to get to know each other beforehand?

I got lucky with Roday. I hadn’t seen a lot of his work, but once I watched some, it was such an easy choice. I knew he was the guy. So then you just have to get your casting director to set up a Skype call, and try not to make an ass of yourself. That’s my approach. None of my actors had any time to hang out with each other, or even with me. James and I spent two hours together in LA discussing the character. Everyone just showed up and started working. Danny Glover is such a pro. I loved the chemistry between Danny and James. Robin Weigert is so remarkable. All of my actors had a very different way of working, a different process, but they all worked so well together. I tried to create a nice mellow environment for my actors. There are some really wonderful performances in this picture. I feel super lucky to have such an amazing cast.

Pushing Dead is set in San Francisco, which is known for its rather large gay population and its awesome mix of Victorian/modern architecture. How crucial is setting to this film? Do you think it would have worked as well in another city?

I think it would have required a bit of a rewrite if we had shot in another city. But I love San Francisco and wanted to shoot it here. It’s where I live, too, so there’s that. I wanted to try to do a lot of my normal routine. I didn’t want production to interfere with things that are really important to me. I made sure that I still picked up my nephew from school one or two days a week and had time with my family and my pooch. It’s a tricky thing to do, but it worked. And I think we did a pretty good job capturing the city. Feels authentic to me.

This film is very accessible despite it mainly being about the tribulations of an HIV-positive person. What is the main thing you want audiences to take away from this film?

Whatever crap you’re dealing with in life, I think you can almost remove HIV from the movie and insert your stuff there. It’s a story about coping. And living. It’s a story about relationships and support systems. I really really wanted this movie to be accessible, so I’m glad it felt that way to you.

In the film, Dan has a line that goes, “What will remind people of me?” It really stood out to me because humans often have this tenacious fear of being forgotten. What do you want to be remembered for?

A super uncle. A good spouse. That kind of stuff. I’m really proud of this little film, so for people who don’t know me, I’m happy to leave this behind. But I don’t plan on going anywhere for a long time, so I try not to think about it. When you’ve been positive as long as I have, you have to convince yourself you’re invincible. Sometimes it’s healthy to be a little delusional.

The most fun thing to shoot was probably Robin Weigert’s self-defense class. We had so little time to do it. I had some pressure from producers, so if I couldn’t squeeze it in before lunch, I was told we’d have to lose it. We got to the gym, jumped out of our trucks, lined up our actors, and I gave them a teeny bit of direction. It was fun and easy. And that instructor’s suit is really beautiful. My favorite scene might be the last piece of poetry. It frequently makes me cry. Roday did a remarkable job. And that was day 2 of the shoot.

If you could only ever direct movies for the rest of your life, or write them - which would you choose?

Direct I guess, because you can still shape something like a writer. But I do love to write. Tricky question. Maybe I’ll switch that to writing, since it’s easier to balance writing with personal life.

You’ve got an unlimited budget and endless resources, what project do you tackle?

Babe 3: Pig with AIDS. I would totally make that movie if someone offered it to me. I love Babe. Anyway, the real answer is I’d make a similar movie to Pushing Dead, meaning a movie about everyday stuff. But it would be nice to pay people a little more, and have a couple of extra weeks to shoot. And a couple of additional months in post would be great.

So, what’s up next for you?

I have a project, an episodic, I wrote about my neighborhood, the Tenderloin. It’s a little bit about gentrification, it’s a little about homelessness. Yes, it’s a comedy. It’s going to be good!