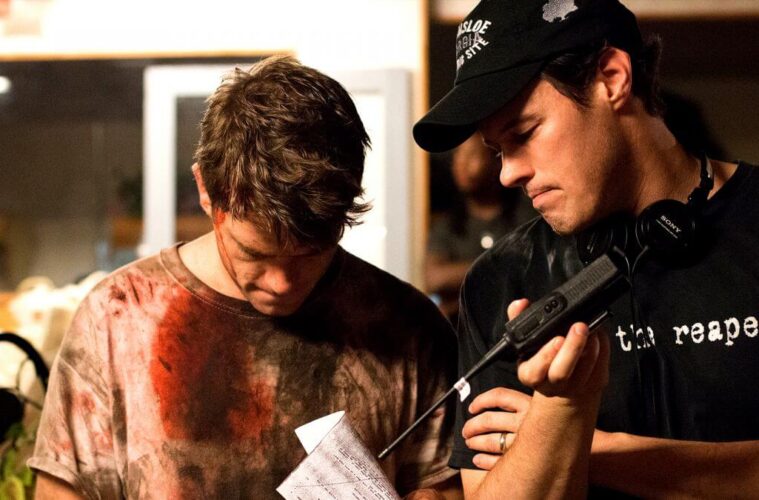 SiREN is the latest creature feature of director/editor Gregg Bishop. The film is an expansion of the segment “Amateur Night” from 2012’s V/H/S, which was arguably the best short of the anthology series. SiREN ditches the found footage for a more traditional narrative style and even has actress Hannah Fierman reprising her role as the ever daunting Lily. Even though she is the titular character, the film actually revolves a groom-to-be on his last night of freedom. Things take a dive for the worst when he and his groomsman end up in a seedy, supernatural strip club and free Lily from her imprisonment.

Amateur Night was arguably the most popular segment of V/H/S, so I’m sure there was that initial attraction to the project, but what was the main reason you jumped on board to turn that short into a feature?

The main reason I jumped on board was that the writers (Ben Collins and Luke Piotrowski) wrote a great script. It's suspenseful and unpredictable, with characters you care about. On the surface, the film is a fun, thrilling monster movie. A dark rollercoaster ride. But more on a foundation level, the movie is a relatable human story that deals with the anxieties of commitment and fears of losing one’s freedom.

A chance to work with David Bruckner was the other reason it was easy for me to say “yes” to this project. He was heavily involved in the development of the script and the making of the movie. He was kind enough to come in and shot some 2nd unit scenes for the film as well. Who better to shoot the second unit than the guy who directed the original? (he's now ruined me for all 2nd unit directors in the future, by the way) We had a wonderful collaboration and I learned a lot from him.

While both the feature and the short can co-exist in the same universe, the feature is more "inspired by" the short. None of us wanted to just go re-make Amateur Night, we all wanted to take it in a new direction and do something more expansive and original.

Who or what were your influences in terms of the style of this film? Was it your decision to ditch the found-footage style used in the short?

I was brought on after David Bruckner had developed several drafts of the script with the writers and they decided to ditch the found-footage angle very early on. I was excited about the cinematic possibilities with this character once she was unshackled from the chains of the found footage format. I felt the traditional narrative style allowed us to really open up the story in a fun, terrifying way.

The monster movie is my favorite sub-genre. I grew up on movies like Jaws, Jurassic Park, Alien, The Thing. And with Lily, we have a wonderful misunderstood monster in the vein of Frankenstein or King Kong... You don’t blame a shark when it eats a human, it’s just its nature.

While the movie was shot in a traditional narrative style, I did take cues from Amateur Night by shooting most of the coverage of Lily in our hero’s point-of-view versus an over-the-shoulder shot. There was just something intimate and unnerving about Hannah Fierman as Lily looking directly at the camera and into the audience’s eyes.

Hannah Fierman reprises her role in this feature which I was really happy to see. There was something enticing about her bizarreness; I couldn’t take my eyes off her in Amateur Night. Was it easy to get her back for the feature? What was the casting process like for the men?

The suits were pushing to look at other actresses for the role of Lily in SiREN, but I knew we just couldn't make this movie without Hannah Fierman. She was absolutely irreplaceable. She was the reason that the character was so iconic in the short. Lucky for us, she was thrilled to play Lily again.

We had to jump in and shoot this movie very fast, and I made it very clear to Hannah right from the beginning that it was her character to own. I told her to never do or say anything she didn’t feel Lily would do or say. We both agreed that “if it ain’t broke, don’t fix it.”

80% of my job as a director is in who I cast, and for the guys, I knew I needed actors capable of intense human emotion.  When you have a supernatural creature in a movie that you’re asking an audience to take a leap of faith and believe in, if the audience doesn’t buy the actor’s performances, then they’re not going to buy the monster.

Finding Chase Williamson to play the lead was an absolute gift.  Most horror movies have a female protagonist that is being chased by a male monster. SiREN subverts this idea in that he’s a male protagonist being hunted by a female monster.  In a way, Chase is like the “final girl” character… he’s vulnerable and sympathetic and truly carries the picture.

Justin Welborn plays the main antagonist in the film. Justin was in Bruckner’s first film “The Signal” and was in my film “Dance of the Dead”.  Both Bruckner and I knew that Welborn would elevate this role and bring thousands of ideas to the table. Welborn avoided the mustache twirling clichés and make this character a real threat.

I can’t wait for everyone to see these actor’s performances in the movie.

The beginning of the film is pretty funny. Were any of the scene between the actors improvised or was it strictly off script?

The best actors bring the missing pages to a script. A lot of it was scripted, but some of the dialogue was what the individual actors brought to the role in the rehearsals and improv sessions that we then incorporated into the screenplay.

Given the film’s several connections to Greek mythology (Medusa-like creatures, Mr. “Nyx”) and the lure of her voice, is it safe to say that Lily is actually a siren?

After VHS, there were always questions about what Lily actually was... was she a harpy? A succubus? A demon? Bruckner told me that to him, she was always her own entity. But when the writers brought the idea of the sirensong to him, he felt it spoke more clearly to what she was and we felt it really worked for the feature story. Also, the fact that none of these things exist in real life gives us the ability to make her whatever we want.

SiREN, much like Dance of Dead, moves at a fairly brisk pace. There was never a dull moment for me and I saw that you were credited as the editor for both films. How do you manage to keep a steady pace in your films? How difficult is it for you to assess what to keep and what to toss?

Since I have cut all of my films up until this point, it’s been really easy for me to take off the director’s cap and put on the editor’s cap.  The key is to not be too precious with anything you’ve shot.

Did you have any scenes that you wish you could’ve included in the film but it just didn’t fit? If so, what was the scene?

We shot a fun bar-hopping bachelor party montage that can be seen in the trailer.  It even included Chase Williamson (who plays Jonah) passionately singing a karaoke song in a crowded bar.  It was cut from the movie for pacing, but actually worked well in the trailer.

What is your favorite horror film of the past three years?

The Conjuring. James Wan knocked it out of the park.

I have an epic science-fiction adventure saga that I’ve always wanted to make.

Currently writing an original science fiction thriller and working with the writers of SiREN on a new original horror movie, both of which I plan to direct. There is also a spec script I wrote with Joe Ballarini (who wrote Dance of the Dead) that we sold to Sony Picture with Michael Bay producing called Lockdown at Franklin High. It's basically a monster movie set in a high-school.

SiREN is now available to watch on VOD platforms and in selected theaters near you.