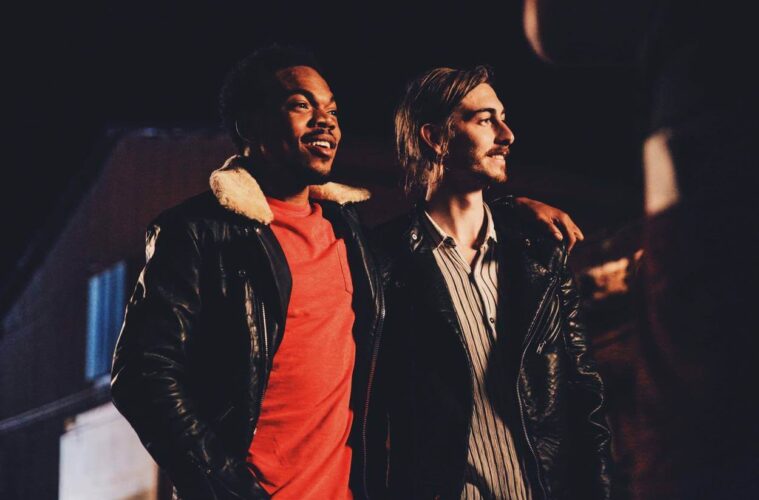 On Halloween, Writer/Director Austin Vesely released a short teaser to his feature debut Slice. The film will be produced and distributed by A24 and is set to release sometime in 2017. Chicago native Chance the Rapper will star as the leading man, Dax Lycander, and this will also mark Chance’s feature film debut. Vesely and the Rapper have been long time collaborators on several projects which up until this point has been mostly music videos (i.e. Sunday Candy and the recent Angels). Not much is known about the film, but we do know that the character Dax Lycander is an ex-Chinese food delivery driver/werewolf caught up in a small town murder mystery.

You sent the media into a frenzy when you released that teaser. How does it feel now that you've completed your debut film?

It feels amazing, but also incredibly strange. It was coming for so long, to be done with principal photography is bizarre, and a little sad. I really miss my cast and crew. The set life is so social and vibrant and intense, but then it ends and you're back to your apartment by yourself. Big shift.

A24 has been killing it over the past couple years with their releases. How were you able to get them to back you on this project?

They took an interest in the project when I first announced it with Chance in the summer of 2015. They asked to read the script and were really interested in getting involved. We worked together on figuring out what that would look like, and it was the honor of a lifetime to join their roster.

Where did the concept for Slice initially come from? Did you always have the main character as a werewolf or is that something that developed over time?

I wrote down a note in my Moleskine about five years ago when I was drunk that said "Person orders pizzas to someone's house; kills the delivery driver" or something like that. I just built upon that initial idea for years. In the beginning, it was not supernatural at all, and then the werewolf thing came up, and ghosts. It definite evolved.

I saw you tweet that Dax Lycander’s character was actually influenced by The Third Man. What about Orson Welles inspired you for the character?

It's not as much about the traits of the character as it is about the handling of that character throughout the film. He paints the whole narrative. People talk about him constantly so when he shows up it feels like a big deal.

How long did it take you to get a final draft of this film? What was your writing process like?

I guess in a way I was still writing some things during production. You just have to adjust to circumstances and sometimes that means a shift in what's on the page. But the main working draft that we were going into production with I finished in February, about four years after writing the initial short film.

What’s the tone and style of the film going to be like and who/what were its influences? When I first heard the idea, I was thinking like a noirish horror-comedy, but after seeing the teaser, I genuinely have no idea what to expect.

I think noirish horror-comedy is fair. It's a bonkers movie. I was really inspired by Twin Peaks for it.

You were able to keep the production of this film heavily under wraps. There were no leaked photos of you guys filming or anything like that. How did you manage to keep it so lowkey? Did you have a casting call for supporting roles or did you keep it more intimate by casting and working with people you already know?

I'm stoked that it came as such a shock to people. Shout out to my producers. I kind of thought that since I'd already put out so much stuff about it (because I'm an idiot) that we'd never keep it a secret. But yeah, we did a lot of casting with PR Casting here in Chicago, and Jessica Kelly did our national casting. You'll recognize some people.

What is your favorite or funniest memory from filming?

Hard to say. The whole thing is just such a fond memory for me, even the times that were tough and we were problem-solving. One moment that sticks out is we had to shoot a really long day one time to help get one of our actors out of town for a family emergency. And at the end of it, even after working for 16 or 20 hours, the whole crew stayed together and hung out and drank champagne because we'd shot our first 100 rolls. So for everyone to have put in such an intense day and still wanna be around each other, that was a good sign.

I know that you both wrote and directed the film, but did you edit it as well?

I did one edit. I couldn't help myself. I just wanted to see what exactly we have. Now it's in someone else's hands.

What is your favorite film of the last three years?

I always have a hard time with these questions. My most recent favorites are A24 movies, no bias. Moonlight and American Honey are so brilliant.

Lastly, what’s next for you? Are you working on anything new or you taking a small break after this long journey?

I'm writing, man. Trying to get back on set as soon as possible. Writing something for a friend too.