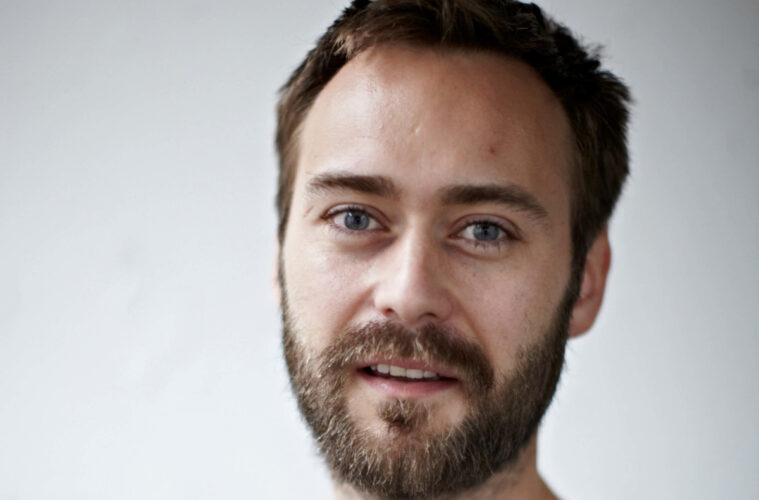 Sometimes when we’re stressed or tired our words may catch on our lips. On the stutter-severity scale (which I just invented) this is probably a ‘1’. Now imagine ‘10’ on the stutter-severity scale and you’ve got Stutterer’s lead character, Greenwood. Director, Benjamin Cleary masterfully presents his disability in the Oscar shortlisted film. I’m a huge fan of a small intimate story and I’m sure everyone is a fan of good filmmaking, Stutterer marries both wonderfully.

I was able to send in some questions to Benjamin and his team and these are their responses.

What films/TV influenced the style of Stutterer?
It’s hard to pin down specific films really. In a way, I guess most of the films you love influence you as a filmmaker in some way you know?

Outside of the films/TV which influenced Stutterer, what films/tv shape you most as a filmmaker and what films/TV do you enjoy?
I love all sorts of stuff and take influence from a wide range of films. From old animation movies to all of the great stuff that’s getting made today. I don’t really watch TV series and mainly just stick to features. Some highlights this year for me were Room, Wild Tales, Mommy, Force Majeure and 45 Years amongst a load of other great movies. If I see something by a director and like it I’ll go and watch all of his or her films. Like this year with Xavier Dolan, I saw Mommy, loved it, and watched everything else he’s done, and it’s all great!

Every filmmaker's journey is different. What was yours?
Well, I came at it from a writing background. I’ve been writing stories in one form or another since I was very small. So I went and did a masters in screenwriting at the London Film School to learn about the craft and learn how to best take my ideas and get them into script form. To me, the script really is everything. It’s the entire blueprint upon which everything is built, so it made sense to enter the world of film that way before venturing into the world of directing.

Seeing as you wrote the film too, how have your own experiences shaped the film?
Well, when I was growing up one of my friends had a pretty severe stutter so I got to see what it was like first hand and it’s incredibly tough. I think things like that stay in your subconscious forever. But the idea for the script originally came from seeing something online about a man with a severe stutter who could speak face to face but found phone calls extremely difficult because it is only his voice on show, as it were. This struck a chord with me and got me thinking about what it might be like living with a stutter in today’s world. And it is this image that we open with, an extreme close up of Greenwood’s mouth as he struggles to speak to an impatient phone operator.

Stutterer shows a disconnect between what Greenwood wants to say and what he ends up saying brilliantly. What ideas did you have in terms of technique to create this disconnect before production?
Thank you! That was one of the main elements that really captured my imagination as the idea was forming. I wanted to hear what was going on inside this character’s head. I wanted to show that although someone might have difficulty getting words out, there can be this wonderful inner voice trapped inside. In terms of technique, it was all in the script and I knew how I was going to do it with the voice over. While I was editing, I recorded myself saying the words and used them as placeholders as I refined the cut and made sure the timing worked and all that. Then when I was happy with the cut and happy that things were working as I wanted, we got Matthew into a studio and recorded the real voice-over material. It was a welcome relief not having to listen to my voice anymore! And the film really came to life when we got Matt’s voice in there. He nailed it.

I loved the flat feel of many of the shots. How did you and the DP come to create this style for the film and why was it chosen?
Our DP is the incredibly talented Michael Paleodimos and it was also his first short film, so it was kind of nice (and kind of nuts) to both be going into the project as first timers. Every shot is motivated by story and the emotional beats of the scene. The camera doesn’t move when it doesn’t have to, it’s handheld when it needs to be, and so on. When I write I’m always thinking about the camera.

Matthew Needham carries the film excellently. How was it working with him and how involved were you in the performance?
He’s amazing, isn’t he? Yeah, it was an absolute pleasure working with Matt. We shot the thing in three and a half days so it was incredibly rushed but Matt was so good at getting it within a couple of takes. It was a great collaboration. From day one he just really got the script and got what I was going for. He’s an immense talent.

Stutterer is a very modern film, given the focus on online communication. What philosophies went into making and maintaining the feel of the film?
Well, I felt that his laptop was almost like a character in a way. It’s his window to the external world and more specifically to Ellie so I felt like it was okay that we spent some time focused on the actual screen, watching their correspondence. I mean it’s not very cinematic to be looking at a computer screen, but it’s something that’s so common in our digital lives now and only through a computer was Greenwood able to communicate as he does. So it felt right to linger on the actual screen sometimes. I felt like it brought us into his world.

The film has earned a lot of acclaim. In your opinion, what is to thank for it?
Filmmaking is such a collaborative process. You have to have a lot of elements work together and we were lucky that we had that. Everyone who worked on the film did such a great job. We’ve been pretty astounded by the success we’ve had. It’s been kind of crazy. I guess at the end of the day it always comes down to story, you know? If there’s a good story there to begin with you have a chance of doing it justice.

What is next for you and your team?
I’m trying to get funding to make another short film that I’ve wanted to make for a long time. I’m also shooting a test ad in the next few months and developing a feature. A few weeks ago I co-directed a short with a mate of mine that’s currently in the editing stage and I’ve adapted one of my scripts into a children’s book with the immensely talented illustrator/author Marta Altes which should be finished this year.

The director of Stutterer, Benjamin Cleary won the award for Best Live Action Short Film
at the 2016 Academy Awards.