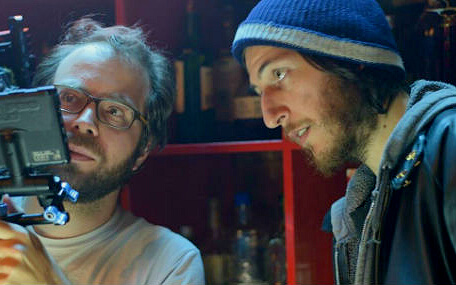 Sun Choke is a psychological horror that follows Janie, an unhinged young woman recovering from a psychotic break with the help of her longtime caretaker, Irma. As the story progresses, it seems that Irma’s unconventional treatments may actually be doing more harm than good and we see Janie reverting back to her old self as she forms an obsessive and invasive relationship with another young woman.

The film is like an eerily alluring fever dream that you don’t really want to wake up from because you need to see where the story will take you. A bold script anchored by impeccable performances and the cold aesthetic of sun-kissed lighting, it’s no wonder the film has been receiving critical praise.

You’ve probably been asked this a thousand times, but where did this idea come from? Did you have any outside influences on the concept and its execution?

I wanted to explore different kinds of loneliness, and the horrors that stem from that state of being. This strange patient/caretaker relationship offered some really specific, really exciting ways into that exploration. Then it was just a matter of being prepared to follow wherever these characters took me.

The film is pretty graphic in terms of violence and nudity but it is never gratuitous which is a common mistake I see in many films is. How did you manage to incorporate these scenes and maintain tonal consistency without being too excessive?

It starts with the script. From the earliest stages, it was really important to me that the scenes of violence and nudity would never be about violence or nudity, they're about characters colliding with each other as they struggle to find some kind of comfort or security in a world that, in a sense, is working against all of them. But the practical balance is ultimately struck in the editing room, and it can be a game of millimeters. The difference between gripping and gratuitous can often be a matter of no more than a few frames.

Tell me about your casting process. How did you get Barbara Crampton and Sarah Hagan on board? I loved the chemistry between the two actresses; they were phenomenal together.

Sarah Hagan came to us via an extensive casting and audition process, in which we saw close to 1000 actresses for the three main roles. She gave several really great auditions brought a really vivid internal life to the character and after awhile, it became clear she had to be our Janie.

Barbara Crampton's management got ahold of the script, and she read it and connected with it. There was a bit of s courtship process, just talking about the character and the ideas behind the film. But for Barbara, and Sarah too (as well as Sara Malakul Lane), I think the script offered each of them some interesting challenges, and an opportunity to take their craft somewhere new. Watching them render these characters as living, breathing, bleeding human beings was an astounding and deeply gratifying experience I will never forget.

Can you give us a little backstory on the title “Sun Choke”?

Sort of. “Sun Choke” is a line from the film, and in the same moment, as I thought it, and wrote it, I knew it was the title.

The film can be, at times, disjointed, which is no doubt intentional but why did you choose to leave the audience in the dark about Janie past and how it was she came to be this person?

Well, for me, the film was always meant to hew as close as possible to Janie's subjective experience moment to moment. So the past, backstory, while important to the characters' makeup, isn't necessarily essential to the story of the film.

What about this film is most frightening to you?

For me, the idea that all it takes is for the wrong person to fixate on you in traffic for your life to be turned completely upside down is supremely terrifying.

What do you want audiences to take away from this film?

There's a lot of violence, and cruelty in this film, but there's also beauty and intimacy, and at least in this story, one simply can't exist without the other.

I don't believe there are any hard and fast rules, it just comes down to deciding what's right for a given project on its own terms, as opposed to broader genre terms. With Sun Choke, I tried to focus a lot of energy on cultivating an atmosphere of pervasive dread, because more than anything else it's what I believed the story demanded.

I have to say my favorite scene is where Janie is dancing in the nightclub. It signified an extremely liberating moment for her, but it was also just a genuinely dark moment as well. I thought you captured that perfectly. What is your favorite scene in the film?

I go back and forth between the dancing scene you mentioned and the "makeup" scene. #nospoilers

What is your favorite horror film of the last three years?

If you had unlimited resources and an infinite budget, what project would you tackle?

I don’t know that it’s a matter of any one specific project. I think I write very small stories for the most part, and I’d love the chance to do something really big. I think that’s what drew me into cinema first as a child, the spectacle of it. Like seeing Earth from space for the first time.

Lastly, what’s next for you? What are you working on?

The film I'm hoping to make next leans significantly more visceral than psychological. Sort of my take on a good old-fashioned white-knuckle thriller. I couldn't responsibly say much at the moment, but pretty soon, you won't be able to get me to shut up about it.

Sun Choke is now available on iTunes and VOD platforms.