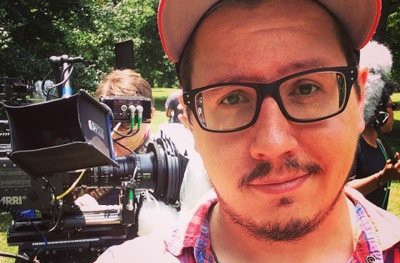 Writer/Director Adam Pinney’s The Arbalest [2016] tells the story of the obsession that rules the life of famous toy inventor Foster Kalt. Beautifully filmed, Pinney wears his artistic influences on his sleeve, but presents a piece that is jarring to lovers of singular cinema; fear not, though – the quirky narrative will captivate, not confuse. Shot in a world where play time lasts far beyond childhood, Pinney’s approach to human relationships, rejection and revenge are unique. I had the chance to pose some questions to its creator, shortly before the film shows at the 2016 South by Southwest festival.

Congratulations on the film! How does it feel to have your work showing at SXSW?

Thanks! It’s amazing to have our film screening at SXSW this year! It’s always been one of those pie in the sky festivals and you dream of having your film play there, so to be screening, and in competition, is very surreal.

After watching, I couldn’t stop thinking about the manner in which the characters interact. They grow, they have jobs and money like any other adults, but there’s a blunt honesty to their interactions that reminds me of the way kids talk to one another. Where did this come from?

One of the main themes of the film is stunted adolescence, which is why toys and board games are such an integral part of who Foster is. That also carries over to his interactions with people. The people he interacts with basically treating him like a child, and he reacts in kind. Those sort of interactions also come from how my friends and I interact with each other as well. We learned early on to cut through the bullshit and just be straight with each other about most things. Saves a lot of time trying to read someone and decipher their intentions.

The dark humour of the movie is great. Is that something you think will be ever present in your work or was it a decision you made for this piece?

We have always integrated a dark, absurdist humour in most of the work we have done, and it’s an area I’m comfortable working in so that element will for sure be present in future projects. I always enjoy a joke or gag that makes you feel uncomfortable for laughing at it.

Given your background in illustration and design, it’s no surprise that The Arbalest looks fantastic. I particularly enjoyed the graphics of the chapter headings and the framing of Kalt in the old Hitachi TV. Why did you choose to set it in the 1960’s/70’s?  What was it like shooting a ‘period’ piece?

The film is set in the 60’s/70’s for several reasons. The film, overall, is sort of a play, and only takes place in 3 or 4 locations. Since we spend so much time in just a few locations, I wanted to make sure they all had a look that would make the film stand apart from the majority of small indies, and there are not a lot of period pieces being made. Having so few sets allowed us to really get creative with the design, and our production designer, Aimee Holmberg knocked it out of the park. It’s also just a ton of fun being able to exist in those spaces and have costumes and fun makeup. The time period also lends itself to the story and my influences. A lot of the characters I based Foster Kalt off of, like Lou Reed, Klaus Kinski, Hunter S. Thompson, all were prominent cult figures during this time. I also wanted to have a take-no-shit woman to exist in this era, and Sylvia was my attempt at giving a voice to someone like that at a time when the Women’s Rights movement was in full swing.

Albert Lamorisse’s The Red Balloon is mentioned by Kalt. If I’m not mistaken there’s a sneaky image of him spliced into frame later in the film. Was his presence purely for the story, or was his work a real influence on your own creativity?

The first short film I made in college had a scene were a couple friends are playing the board game RISK, and I’ve always loved board games and that game in particular. For whatever reason, I decided to research who made it and it was Albert Lamorisse, who directed The Red Balloon, one of the greatest short films of all time. It was a weird moment of two very disparate things that I love, joining together. Originally, we tried to license RISK for The Arbalest, but we were turned down, which turned into a blessing, and allowed me to incorporate the title of the film in a more clever and fun way, as the name of the board game they play later in the movie.

In cinema, who has influenced your filmmaking the most?

I’m going to name a few, because why not? Werner Herzog, Stanley Kubrick, Mike Nichols, Paul Thomas Anderson,  & John Cassavettes. I’m sure I could name a hundred more but these are some of the biggest.

If you could adapt any existing piece of cinema, literature or theatre into a feature, what would it be?

I would love to adapt The Incal. It’s a graphic novel written by Alejandro Jodorowsky and illustrated by Moebius. It would be insane and make no sense and be a mess, but it would be so much fun! Pretty much anything by Moebius would be great. Creating a story around Arzach would be incredible.

You’re part of a film collective called ‘Fake Wood Wallpaper’. Having worked with Mike Brune (who plays Foster Kalt) and Alex Orr (who produced the film) in the past, how did these prior relationships affect the process of making The Arbalest?

With filmmaking, I think it is so important to surround yourself with people you love and trust, and I love and trust them both so much. Hugh Braselton, our DP, also is part of the collective and being able to work with my friends and a very small handful of other creative people was a dream. I prefer the crew to be as small as possible, and for everyone to just have fun and know that we are all in this together, making something cool and interesting.

Looking at your credits, it’s apparent you’ve worked in a variety of roles so far in your career. Do you feel this has informed your process, or is it simply the steps you have taken to forge a path in a very competitive industry?

Yeah, everything I’ve worked on has taught me about filmmaking in some way. You come to find what aspects you enjoy and don’t enjoy. I worked as a grip early on, and I never ever want to do that again, because I am terrible at it. People would constantly have to show me how to set certain things up and it becomes frustrating. I still have people show me the proper way to set up a C-stand, and it’s very embarrassing. Along the way, though, I’ve worked with so many great and talented people on fun projects, and I’ve learned a little from each of them.

I’m a big sci-fi fan, so I’d want to play in that sandbox for a film if I could. There are so few sci-fi films that balance the art and the action and being able to create something as grand as 2001 or Blade Runner would be really fun. And they are just handing out those Star Wars movies to everybody now, right? I would totally make Star Wars 17.

Would you like to tell us about any upcoming projects?

I am currently helping to edit a film called Poor Jane, written and directed by Katie Orr, which is really great. As a collective we have a couple more films on deck. I’m hoping to make a film about a woman in the south who claims to have telekinetic powers and starts a cult to get revenge on a faith healer.