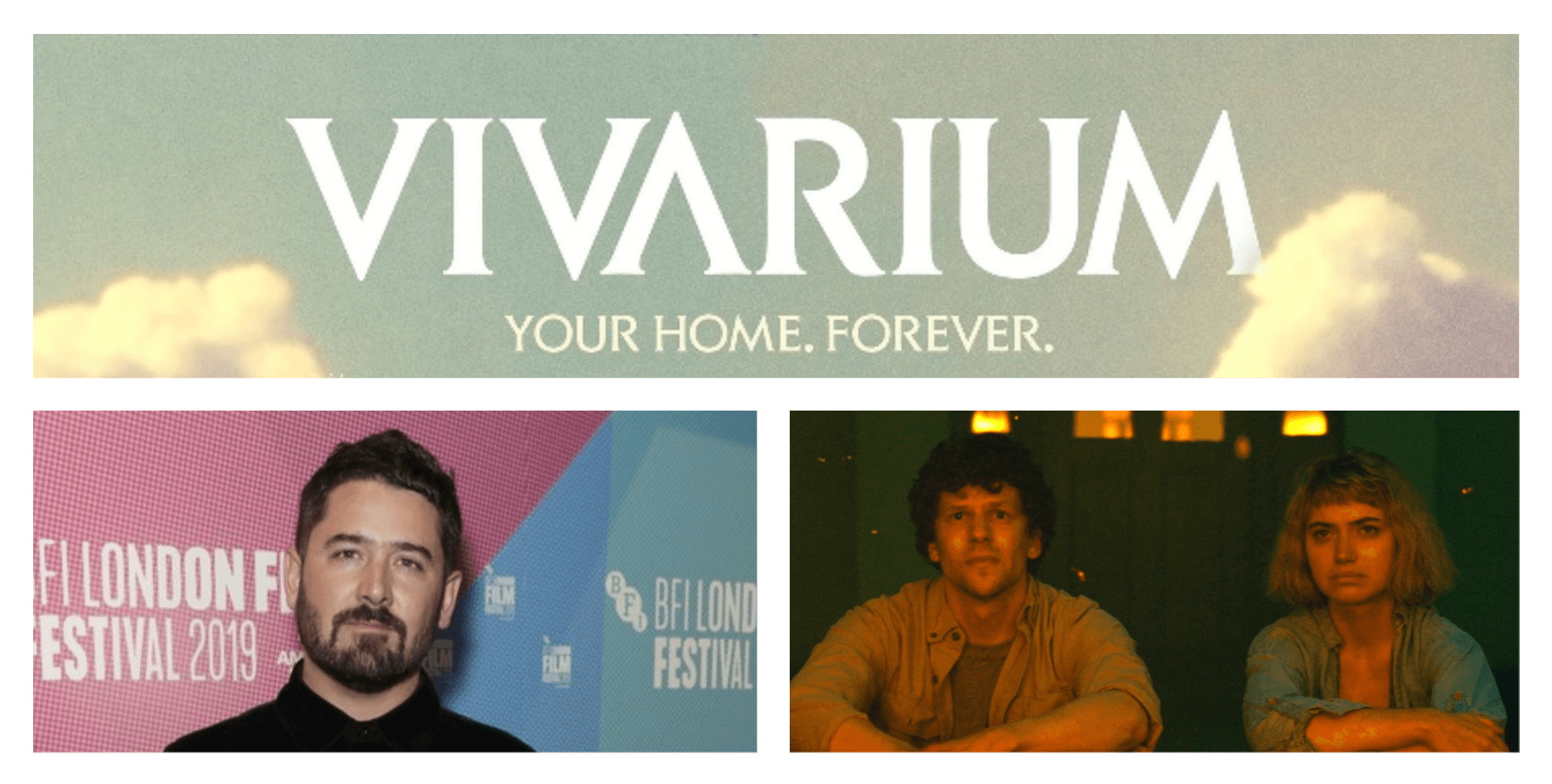 Directed by Lorcan Finnegan, the science-fiction mystery film ‘Vivarium’ follows a young couple (Jesse Eisenberg and Imogen Poots) who find themselves trapped in a suburban nightmare, a surreal housing estate by the name of 'Yonder'. An ironic twist of fate sees Vivarium's release date (March, 2020) coincide with the real-world COVID-19 pandemic, where government restrictions have forced people to stay inside to help slow the spread of the virus. In the interview, Finnegan details his directorial work on the feature — from story conception with frequent collaborator and film screenwriter Garret Shanley, the complicated filming process spanning multiple filming locations and the artistic influences toward the overall aesthetic of Vivarium.

Vivarium is available to watch via iTunes - Amazon 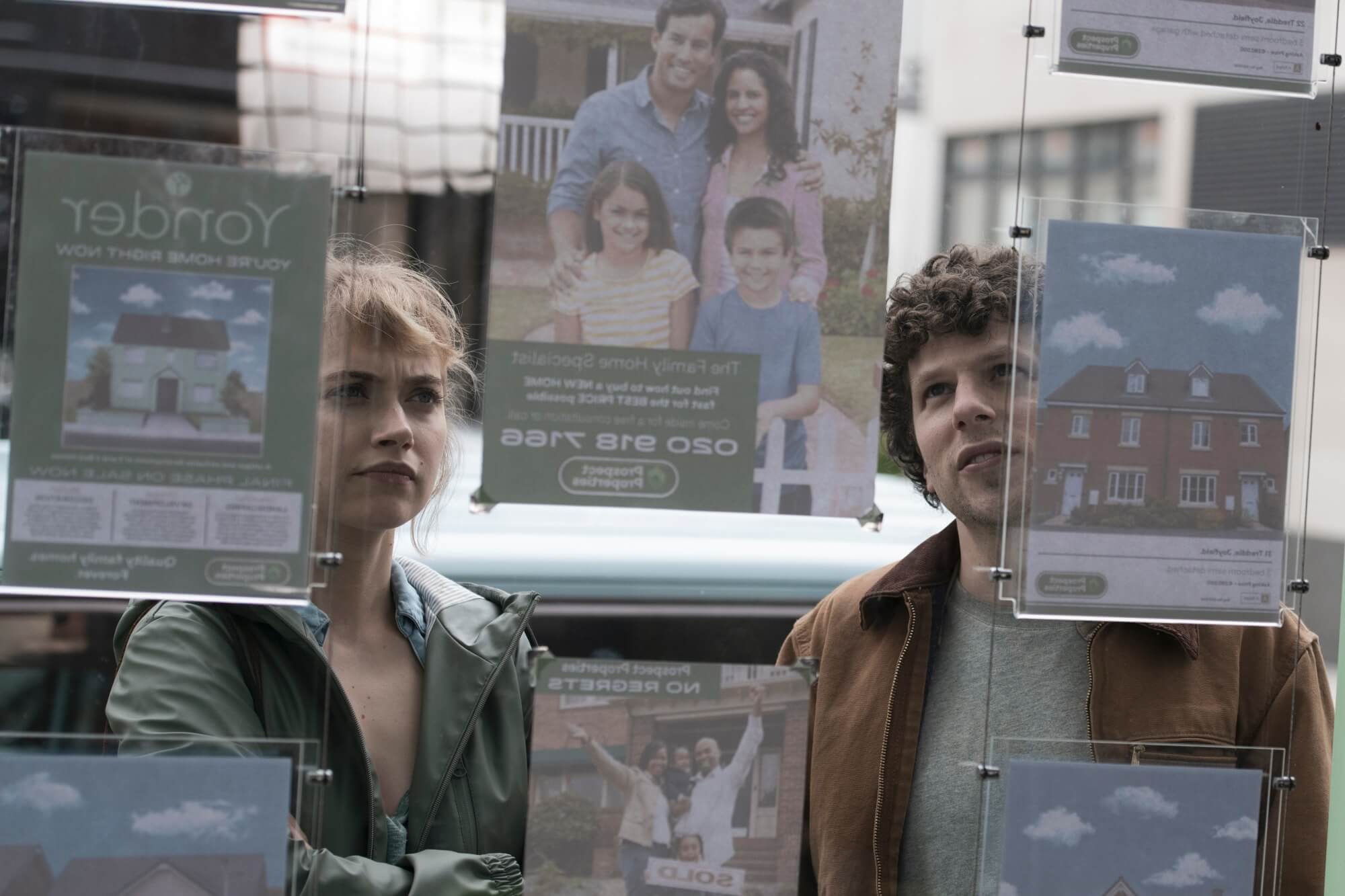 How did you go about casting Jesse Eisenberg and Imogen Poots as the main characters in Vivarium?

First Imogen came on board, she read the script, really liked it and wanted to meet. We met in London and chatted about all sorts of stuff, art and photography, and films, etc. We pretty much forgot to talk about the film but we knew that we were definitely both on the same creative wavelength. We met for lunch a few weeks later and got into the script more and discussed who would be a good fit for Tom. I’d been trying to remain open-minded about who would play Tom until I had cast the role of Gemma. We went through some ideas and one of them was Jesse. I thought he could be really interesting alongside Imogen, they felt like a good fit. Imogen knew Jesse from working with him on two other films so she thought he’d respond to the material. I said ok, let’s do it. So Imogen sent him the script from her phone there and then. Jesse read it about two days later. He loved it and wanted to meet in NY. We spent the day wandering around Manhattan talking about films and life and everything in-between. He came on board and we set a shoot date.

What were the most challenging and rewarding scenes for you — referring to how you felt while directing/on set, and then when seeing the film in the final cut?

One of the trickiest scenes was probably when Tom locks the boy in the car and has a fight with Gemma that causes a rift. The exterior of Yonder was a set built in Belgium and the interior was a set built in Ireland so maintaining the emotional intensity across both countries and cutting it together was tricky but I am happy with how it worked out in the final film. We also only had one side of the street, so all the reverse angles had to be shot into the same background but with the 9 removed from the door, the hole taken away, the car and lighting flipped. Which added to the challenge of creating that scene.

The driving sequence showing Tom and Gemma arriving into Yonder (and trying to leave) was also very challenging. The set was three houses long, so we could only drive a short section of it. The driving scenes had to be shot across two countries and three locations, combining aerial shots that would later be replaced with matte paintings, the actors’ close-ups shot in a real housing development with the deep background rotoscoped and shifted in hue to match the set and the car driving in the warehouse in Belgium. We had to add reflections into the windows of the passing houses to create the illusion that there were houses on both sides of the street. It was like a weird puzzle that had to be pieced together to create a disorientating journey that the audience could track.

Finally, the scene in which Tom and Gemma are separated and calling out for each other had to be shot on the same little section of set. So creating the sense of distance between the characters through sound, music, editing, and lighting was challenging but I like how it turned out. Simple but pretty effective. 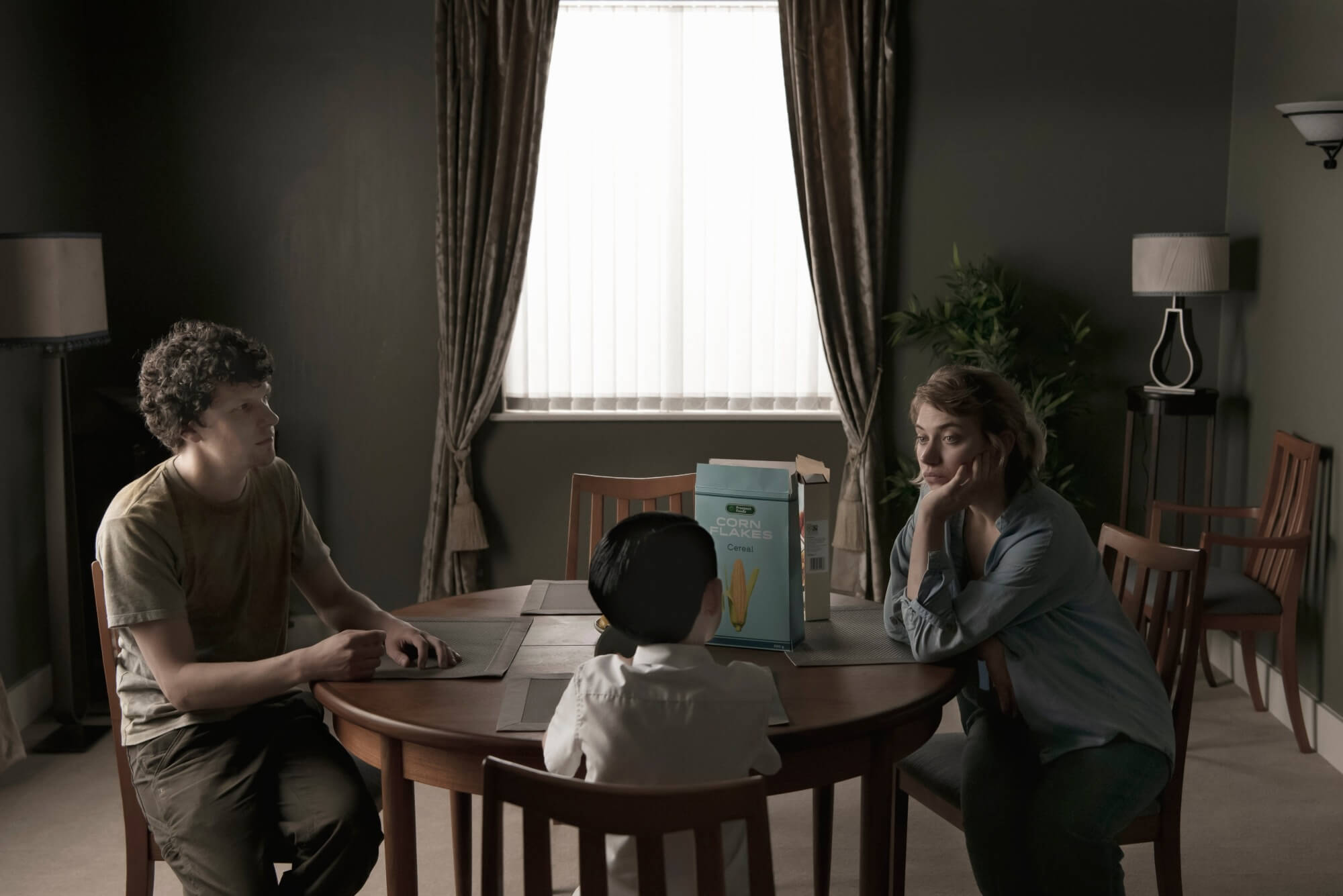 What inspired the story of Vivarium?

Garret Shanley (the writer) and I made a short film in 2011 called Foxes. It was a reaction to what was going on in Ireland with the economic boom in the early 2000s and subsequent crash in 2008 which left ‘ghost estates’ around the country. These were housing developments that were abandoned, often with only a couple of people living there.

How was it working with cinematographer MacGregor to create the visual aesthetic for Vivarium?

MacGregor shot Foxes for me so he was a natural fit for Vivarium. I wanted the film to feel a little like a nicely lit TV commercial at times, hinting towards the artificiality of the environment. A lot of the preparation was problem-solving and making the production design and photography work together. The set wasn’t massive, so one of the keys to making it work was shooting on long lenses, compressing the space and creating a claustrophobic feeling. Also shooting from a height to create a sensation of the place being a Vivarium. We lit all of the exterior Yonder scenes with sky panels suspended from the ceiling and diffused with a massive cloth draped below. My first feature Without Name was shot entirely on location, so we could find shots and point the camera wherever we wanted. Because almost all of Vivarium was built it was a very different experience, the light was almost always artificial. Luckily MacGregor is also very VFX savvy. One of the VFX artists was Jonas Using in Copenhagen, MacGregor and I Skyped with Jonas who would share his screen and MacGregor would get him to set up the lighting on the CG model exactly like it was on the set, which was very helpful.

Can you tell us about the inspiration and work that went behind the VFX/special effects featured in the film?

While we were developing the script I made a CG environment test to start getting my head around how big the set would need to be, the width of the road, the gaps between the houses, etc. It also gave me the opportunity to test colors. Once we got into prep I was able to share these tests with the VFX supervisor Peter Hjorth and the production designer Philip Murphy. We had to be as cost-effective as possible and shoot plates for 2D set extensions, matte paintings and avoid full CG where we could. I knew that I wanted the film to have a ‘fake but real’ aesthetic, tangible but artificial. So getting that balance right was tricky. VFX artists like to dirty things up and break up uniformity to make VFX look more realistic, but in our case, we needed repetition, fakeness and weird fluffy clouds. The set was lidar scanned to create a CG model which was then used for matte paintings and any moving camera shots. In the evenings we shot plates on the set by stepping the camera back, shooting a few seconds, stepping the camera back again and repeating the process so we could use the real set for 2D set extensions as much as possible. The clouds were probably the biggest challenge creatively. One of the earliest references for Yonder was Rene Magritte’s painting Empire of Light, with its surreal fluffy white clouds. We had to make them fluffy and fake but also react to light in a natural way for the various lighting conditions. The weird aesthetic also had to be introduced gradually so the audience would accept the transition from the real-world to Yonder. The VFX were completed across Denmark, Belgium, Ireland, and Canada, so keeping track of everything and making sure the aesthetic all tied together was quite challenging.

What do you hope for audiences to take away from Vivarium?

I hope the film lingers in their minds, lurking in the subconscious long after the credits have rolled. Maybe they’ll be forever freaked out by estate agents called Martin. I’m always fascinated by what various people take away from the film or how they interpret it, so I look forward to hearing some opinions. Mostly I hope they just enjoy it as an experience.

What films/directors have had the biggest impact on your filmmaking and why?

It is difficult to pinpoint exactly, but I grew up watching TV shows like Rod Sterling’s Twilight Zone and Roald Dahl’s Tales of the Unexpected, which must have made an impression. One of my earliest memories of film was watching 2001: A Space Odyssey when I was about 8, so I think that made me gravitate towards more cerebral films. Early influences were probably directors like Stanley Kubrick, Roman Polanski, Peter Weir, Darren Aronofsky, Ingmar Bergman, David Cronenberg, Nicolas Roeg, Lars von Trier, John Carpenter, Michel Gondry, and David Lynch to name a few.

Hiroshi Teshigahara’s 'Woman in the Dunes'

I am about to start casting a supernatural thriller called 'Nocebo', which will be the third film in collaboration with writer Garret Shanley. Garret and I are also deep into the writing of a dystopian fable called 'Goliath', which we’ve been developing for a couple of years. I’m also working with writer Thomas Martin on a psychological action-sci-fi project called 'Precipice', which is shaping up nicely. So I’m being kept busy!

Watch Vivarium via Amazon or iTunes