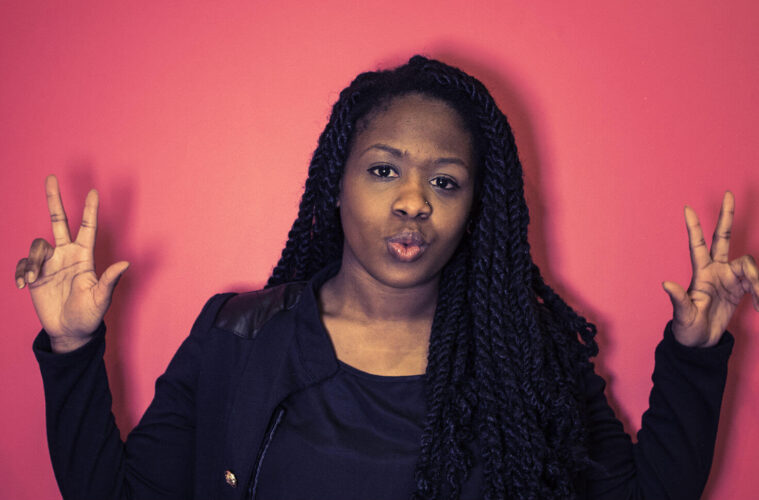 Director Salima Koroma’s documentary Bad Rap follows four Asian-American rappers as they try to make a name for themselves in the hip-hop world. The film focuses on these rappers overcoming the many obstacles of the rap game, which is dominated primarily by African-Americans, and their stretch to break into mainstream hip-hop.

Where did the idea for this documentary come from? I’m sure you’ve been asked this a thousand times by now since you’ve been working on this project for a few years now.
No, it’s all good. Bad Rap started off as my grad school thesis. I knew I wanted to do a music documentary, specifically about the Asian diaspora because I was a writer for a K-pop site and a hip-hop site at the time. I reached out to another writer at the hip-hop magazine XXL, Jaeki Cho, who would end up being my co-producer. He’d just interviewed a K-pop singer/rapper named G-Dragon, who appeared in XXL. We got on the phone and started talking about how the entertainment industry sees Asians. How there are so many Asians in the hip-hop game flying under the radar. He started throwing names at me: Geologic of Blue Scholars, Chops of the Mountain Brothers, the legendary DJ Babu. I remember learning so much from him and then going, “Dude, has anyone done a movie about this?” Jaeki was like, “Nah, I don’t think so…” And we sat with it for a moment, wondering how there were so many great hip-hop films and none focused on the rich history of Asian Americans actually emceeing. It was something that was very important to Jaeki, being a Korean immigrant and Asian American. For me, it was an opportunity to explore this world and help tell a story rooted in hip-hop, and emblematic of the American dream.

Actually, how long exactly have you been working on this project? From the inception of the idea all the way to the film’s release. Aside from raising money, what was most difficult about the project?
The most difficult part about this project is that I didn’t know how to do anything. I could shoot my ass off and edit, and tell a story. My producing partner, Jaeki Cho could reach out and get people on board. But we didn’t know how the industry worked. How do we apply for all these festivals? Where do we get the money? Wait, we can’t do both SXSW and Tribeca? We have to choose just one? We have to get a DCP file and it costs thousands of dollars? We need a sales agent? And a clearance lawyer? And a contract lawyer? And a CPA? A distributor takes how much? Subtitles cost what? I mean, I could go on and on. Easily the hardest part about this is that you have to learn on the job, which means you’re never prepared, there’s always a crisis, you’re constantly making mistakes and trusting people to do the job right, and there’s only two of us. But every crisis, we came out on top. I’ve learned that making a movie, especially your first one, you’ll always make mistakes but you’ll never fail.

The rappers in this film are incredibly talented, so what’s up with the title ‘Bad Rap’?
Ha! I can’t remember which rapper it was recently who was asked to explain the lyrics to his song. It might have been Kendrick Lamar. He responded something like, “If I told you what everything means, it would be too easy.” And then if your lyrics are particularly clever, you sound like an asshole explaining how clever you are for coming up with them. So, think of ‘Bad Rap’ as a play on having a “bad rap” which is slang for having a “bad reputation.”

It’s understandable that appropriation is talked about in this film since hip-hop and rap are genres primarily associated with the African-American community, but as a WOC, do you feel as though this genre is being appropriated by Asian-American artists or any artists other than African-Americans?
These days, whenever I have a discussion about racism, discrimination, or appropriation, I always stop and make sure we’re all using the same definitions. We’re in an age where everyone thinks they know what something means because they saw it once on Tumblr. Appropriation means to profit off of a culture in a way that the creators of that culture can not profit, AND more importantly, to criticize the originators for the culture while simultaneously benefiting from it. So, like, when black people created Rock ’n’ Roll (and Jazz and Blues, and etc. and etc.) and were told it was vulgar music. It couldn’t be played on the radio. It couldn’t be shown on television. That is, until white people started doing it. Then it became innovative. Then it stopped being “trash” and became “art.” Or more recently, when Miley Cyrus used hip-hop and black people to gain street cred and huge success, only to claim later the violence and misogyny is so “not me.”

So absolutely, I believe that hip-hop has been appropriated, but for the record, black music has been appropriated in America since the beginning of its history. A lot of white artists have used the platitude “[black-music-genre] is for everyone!” without acknowledging its roots, and then make caricatures of what they think that genre is supposed to look like; gold chains, overdone ebonics, grandstanding and posturing when it doesn’t feel natural. And then they leave when it starts becoming boring for them. The better question now is, “Who feels authentic? Who is of the culture?” When I listen to a Dumbfoundead record or a Lyricks track (both Asian American artists in Bad Rap), I feel like they put in work, paid their dues, and most importantly are true to themselves and respect the history and craft. Do I feel like there are some Asian rappers appropriating hip-hop music? Sure. Are some white rappers appropriating hip-hop music? Rest assured, definitely. And are some black rappers appropriating hip-hop music? Hell yeah, them too.
In the era of Trump, how important do you think this documentary is to the Asian-American community and what does inclusivity and accurate representation in mainstream media mean to you?
We started shooting this film in 2012 when Barack Obama was running for his second term. So, first of all, I couldn’t fathom that 5 years later, Bad Rap would release and Donald Trump would be the leader of the free world. We started screening the film in 2015 during what I like to think of as a pop culture renaissance for people of color writing and telling their own stories. Now, you’ve got shows like Insecure, Atlanta, Fresh of the Boat, and Black-ish, which all star POC and/or have POC writer’s rooms.
So, during this sort of optimistic period of “Hope and Change,” a lot of things were happening for POC creators. For me anyway, there was this sentiment that I could do what I wanted. I could be who I wanted to be. Wear my hair in a fro if I wanted to. Listen to Korean Pop without irony. Make cool shit. And I was seeing it everywhere. Black girls doing cosplay. Asian girls spitting rap bars. White boys ripping the dance floor. Asian guys slowly getting roles on primetime TV. It has been a unique time spurred by the digital era, which allowed us to see, experience, and dream big things. And the more you saw us on TV, the more easily we were able to place ourselves in the American story… and the bigger the old guard’s “whitelash” became. Thankfully, the Obama era saw us building that visibility (Asian visibility, black visibility, etc), and the Trump era will see us fighting to maintain it.
What most do you want the audience to take away from your film?
When I was making this film in college, my advisor was a woman named June Cross, a legendary filmmaker in her own right. Back then, she kept asking me, “What’s your film about?” And I’d say, “Asian rappers.” And she’d go “Yeah, but what’s it about?” And I’d look at her and repeat, confusedly, “Asian…rappers…” Finally, I realized what she was asking about. This film is not just about Asian rappers. It’s about Asian rappers fighting to get to a place where they’ve been told repeatedly they don’t belong. We’ve all felt like that at some point in our lives. I want people to come out of this film feeling like, “Fuck whatever people say, I’m going to do what I want to do, and succeed beyond all of our wildest dreams.”
Who is your favorite Asian-American artist you discovered while filming and why?
I met a lot of Asian rappers shooting this film. So it’s hard to separate the music from what I know about them. For example, when I first started shooting, Lyricks, one of the main rappers in the film, was still figuring out his image. His love, passion, and talent rested in the boom-bap style of the early 90s (think Wu-Tang, Nas, East Coast rap). He’d go on stage and kill it, but there was always that nagging question I believe he had which was, “To what extent should I continue to do this?” Of course, every creative has those doubts but it’s different when you’re an Asian man trying to be a rapper. You’re trying to figure yourself out; which visuals are out of line? What lyrics need to be avoided? Would it be corny to rap about God? Fast forward to 2017: I saw Lyricks perform onstage as half of the duo Year of the Ox with his longtime friend JL. They absolutely ripped it. I mean, killed it. They owned that crowd, and every crowd they performed for after. My friends and I looked at each other thinking “These guys are going to blow up!” To see Lyricks grow into such a confident artist, and to see all the other artists become undeniable in their crafts has been incredible.
With an unlimited budget and endless resources, what project would you tackle?
I’d write a television show about people who are of the culture. People like you and me, whose voices have yet to be heard, and whose experiences are dope and important in showcasing where we are as a country right now. In fact, I’m already writing it.
Lastly, what is next for you?
Working on getting that unlimited budget.

Bad Rap will be released to major VOD platforms (iTunes, Amazon, Google Play and Vudu) this May 23rd.