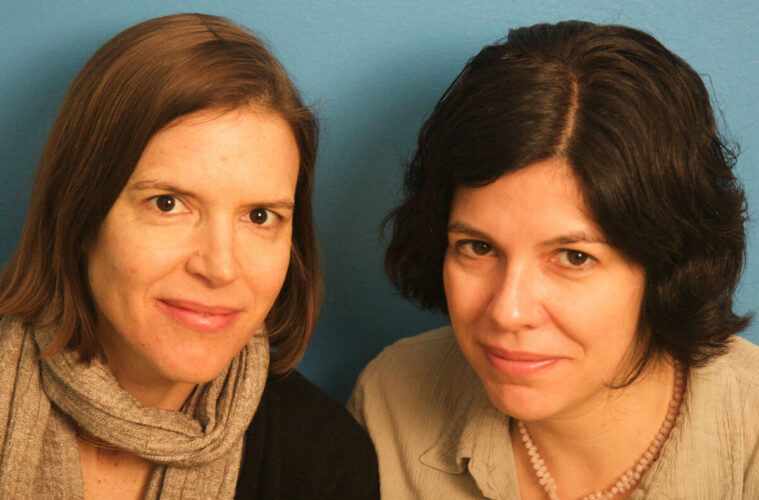 Annie J. Howell and Lisa Robinson both have a background in writing, producing and directing. They have previously worked together on the comedy film Small, Beautifully Moving Parts where they shared producer, writer and director credits. They once again collaborate in this vein for Claire in Motion, a film about a woman (Betsy Brandt) whose husband disappears, which leads her on a puzzling journey of revelation.

Could you describe the themes Claire in Motion explores?
We were interested in telling a story about someone who thinks they know who they are, and feels confident in their relationships. What happens when that certainty is stripped away? We are drawn to stories that grapple with uncertainty … because we grapple with it all the time.

The plot was very believable and entrenched in realism. Was there a real life story or event that inspired the film?

Not for us personally, but since making the film we’ve had many people come up to us and say that this happened to a friend of theirs or their family. There are more stories than you think like this, where someone goes missing without a trace.

Did you gain any influence from other artistic mediums in preparation?

Yes, we looked at Edvard Munch paintings that were often blue — intimate and almost claustrophobic in their beauty — as a basis for the overall tone. Our production designer Emmeline Wilks-Dupoise was instrumental in taking these very “real” locations and tilting them towards a more subjective feel, a dreaminess we wanted. We also took a lot of photographs of the town of Athens, Ohio and scrutinized them for spaces that really held the gothic feeling we were going for. Annie was living in Athens at this time, and Lisa was in New York, so by being both very close to the setting and also more objectively removed, we were able to combine perspectives to prep the look and feel.

How was the experience of working with Betsy Brandt? And, was she a benefit to have during production?
Betsy was amazing. She loved the script and came to the project with such openness and passion — and her obvious talent. She immersed herself into the small town and made friends with everyone, all the while sustaining through a grueling schedule because she was essentially in every frame of the movie. The minute she tried on the wardrobe for Claire, we could just see she felt this character and went into her like a deep dive. Betsy commits with such love for the character. There’s something about that that sets her apart.

For someone so young and with a limited film background, Zev Haworth showed great promise. What were the differences between directing someone of his age and a more seasoned actor?

Zev was such a pleasure to work with. He was actually a local kid. Annie had known him for a while and had a hunch that he could play this role. We even based the fact that Connor is a knitter on the fact that Zev really knits. What was interesting about Zev was because he was so wise, kind of an “old soul,” we actually ended up directing him a lot like an adult. Because he could understand things at that level we didn’t have to play any of the usual games you might play with a kid in order to get a performance.

Did this film help in developing a sense of how you would both like to approach any future projects?

We both liked having a long prep with the location. That was key in a natural development for the feel of the film.

How important is it for you both to write and direct together?

We write and direct together but also work separately as well. When we started working together we had both made short films independently. We have continued our work as individuals, as well, with Annie currently mostly doing other writing and Lisa doing other directing. We don’t see this as an “all or nothing.”

Would you be able to explain in detail the processes you undertake, with regards to writing and directing responsibilities?

We work organically together with no hard rules. By the time we are shooting we’ve spent so much time writing and prepping that we really know what our vision is for the film. When we disagree about something, we shoot it both ways. We also try not to overload the actors with two voices, so one of us talks to them at a time and we do a lot of conferring.

Does either of you have a predilection towards writing or directing?

We like both, but currently, Annie is focusing a bit more on writing and Lisa on directing.

Do you have any future collaborations together set for the future?

We are developing several ideas at the moment. We like taking set genres and subverting the narratives a bit so that’s something we will continue to play with.

What would be an ideal or dream project that either of you would like to put into motion?

We’ve talked about Claire as a limited series, much like “Top of the Lake.” Drawing out this mystery, even more, could open up all kinds of possibilities for the character and for exploring the town.

What’s next for the both of you?

First and foremost, more writing! We are back to the stage where time at the keyboard really is the most important priority.

Claire in Motion will be released on January 13 in select cinemas and on demand.