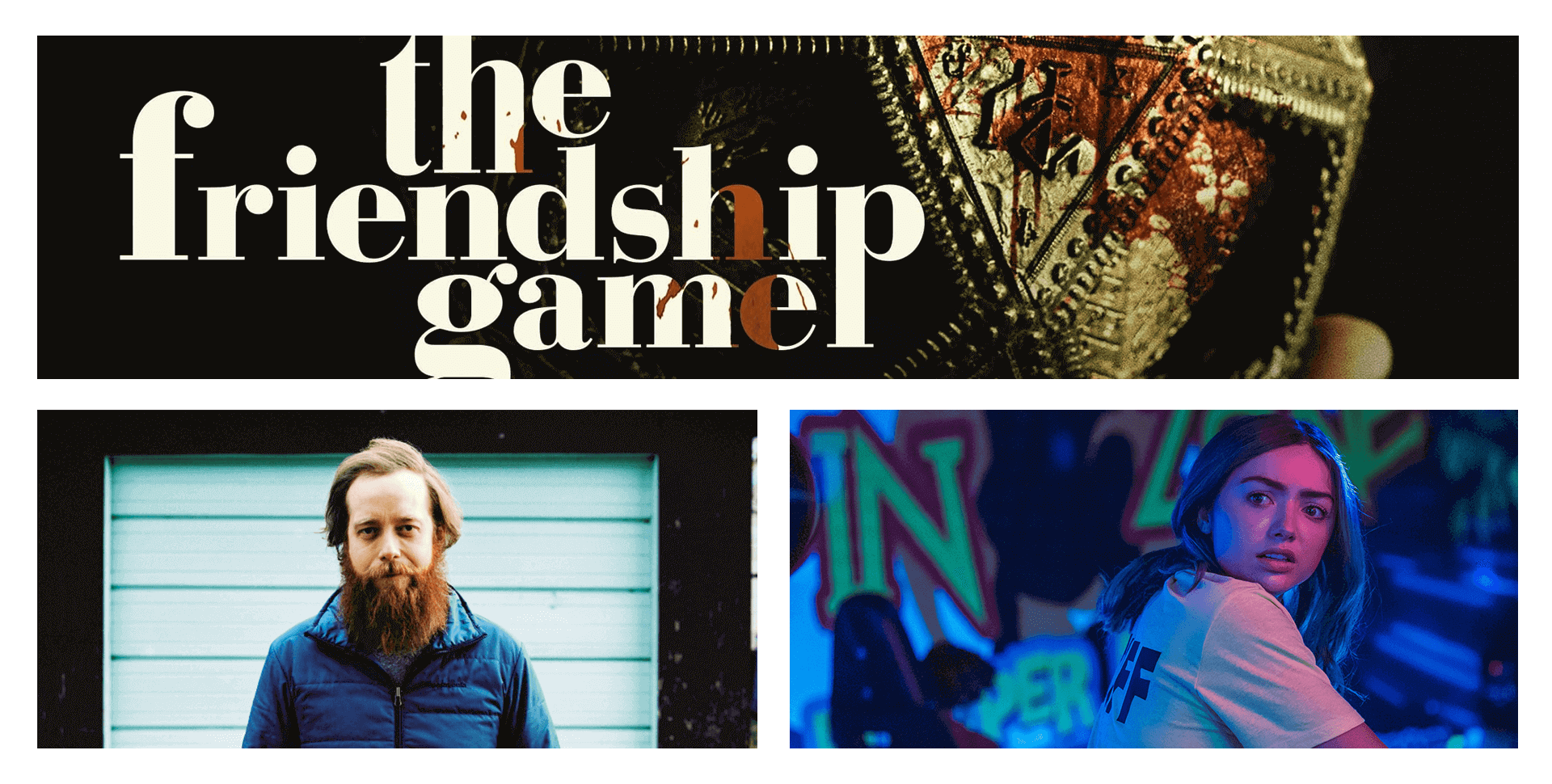 The Friendship Game is a sci-fi horror film starring Peyton List. The film follows a group of teenagers in a small town who discover a strange object that tests the strength of their friendship. The following interview is with the director Scooter Corkle which explores his favorite filmmakers, favorite films, and multiple facets of the filmmaking process for The Friendship Game  — now available to watch via digital.

What was the casting process like for The Friendship Game?

Casting is always a bit messy. It’s staring at tapes, making lists, and making judgments, but it’s also just part of the process. And when you’re an indie movie, so much of it comes down to availability, so we got incredibly lucky that we found a tight window when Peyton List was available and got the script into her hands. Within a weekend she read it, and we were chatting over video the following Monday. Indie schedules are intense and Peyton was all the way down, a total pro, and very open and collaborative with everyone.

Once Peyton landed, the next few months were all about filling out the cast to support her. I’ve been a fan of Brendan Meyer for years, he has that mind-bending cosmic clout from The OA and Color Out Of Space and is always great, so when his read came in, we all instantly saw Robbie come to life. Kelsey Mawema sent in such an energetic and singular read, different from what I originally envisioned for the Courtney character, and like Brendan, gave the character a life of her own. It was surprising and fresh, we knew she had to be Court. Our Cotton Allen search was quite extensive, I interviewed a pile of super-talented performers and spent a long time thinking this role through until Kaitlyn Santa Juana’s read came in and blew us all away. She had been mostly a stage performer up until the pandemic, so we got lucky she was available, as once we saw how naturally emotive she was, and how vulnerable she could be at the drop of a hat, Cotton came alive too. I think casting is about discovery, being open to being surprised, and allowing the performer to be themselves as much as you can within the character. We got lucky, and our cast rules!

What was it like working with the screenwriter Damien Ober?

Damien is friendly, collaborative, a serious brain, who relies so much on instinct and creativity to build out his worlds, so our working relationship was a lot of fun. It’s refreshing to work with someone who prioritizes ideas more than just structural justifications and takes chances on a narrative because it could be cool. We chatted for years about character, imagery, and theme, and really had a good time. He’s also an incredibly active cyclist so all of our notes calls would happen while he was out on the road, ripping around on his top-of-the-line road bike. Everyone has their best places to think, mine is usually in the shower or in lying in bed, but each to their own!

The ending takes us back to the garage sale, but this time around, they don't buy the game. What can you tell us about the ending and the cause of Cotton's death?

The film has a rather simple guideline: if your friendships don’t survive the game, neither do you. To play the game, you tell your friends your deepest desire, and then the game shows you what happens if those deepest desires become real, testing the bonds of friendship by how each of you reacts - and spoiler, no one really reacts that well. In order to win the game, you need to stay friends, accept and still love your friends when you see them at their worst. Cotton is the first of the group to forsake their friendships, and pays the price for it — becoming a ghostly tool of the game itself to further push and test the group. Once Zooza realizes that her deepest desire has pushed her friends away, she accepts her faults and theirs and fights to turn the game around — as the game closes in with brutal visions and violence. In the end, Zooza is able to show that “being with her friends” is the most important desire she has, and changes the course of their fate. When they respawn at the yard sale, at the beginning of the game once more, they’ve already won, so they leave the game behind for someone else to play.

What were the influences for the visuals of The Friendship Game — what was it like working with the Cinematographer Farhad Ghaderi?

Farhad and I spoke a lot about elevated naturalism, creating a feeling that was familiar yet unstable. Most of the film, unbeknownst to our characters or even our audience, takes place while we’re playing the game or while we’re inside the game, so we never wanted to feel like we were on firm ground. Part of this came in editing and sound, but we wanted to give the image its own character. We play a lot with bright colors yet natural, source lighting to achieve something a bit surreal but familiar. Long camera moves, eye-lines directly to camera, chromatic aberrations — all of these were woven in to destabilize the audience. Farhad and I have been friends for years and in knowing how particular and thoughtful he is, I felt like he’d push me outside of my usual comfort zones and surprise me, so our collaboration was a give-and-take in a meaningful and purposeful way. I think we ended up pushing each other, and the movie definitely benefited from that. He’s also the sweetest man you’ll meet, a protector and supporter of his crew, a true artist and friend.

What are your favorite scenes in The Friendship Game — during filming and the final cut?

The entire party sequence is probably some of the coolest stuff we shot, and though it was an insanely tight schedule to shoot it all, I’m really proud of what we did. It shows up across the entire film, and each time we come back to it, its meaning changes. It starts as a colorful good time for the characters, but the more we reveal, the more we come back to visit it, the party transforms into an emotional memory of the last time the group saw their missing friend, and the last time they were all truly friends together. That sequence has its own narrative and emotional arc throughout the film.

The space itself is an abandoned sanatorium that amazingly gave us permission to graffiti the whole thing, and the local street art community came out in spades and went to town. This was all our production designer Richard Simpson’s dream. Not to mince words, but seeing it all come together was just plain badass.

Where was the movie filmed, and how long was principal photography?

We filmed in Kamloops BC Canada, about 3.5 hours from Vancouver, and principal photography was around 20 days all said and done. Indie movie schedules are incredibly intense, and you always want more time, but the city of Kamloops and the communities we shot in were great to us, and really allowed each of our days to count. We’re indebted to their generosity, and the local crew of sweet humans who gave us their all.

Can you tell us about working on the score with Composers Blitz//Berlin?

I’d been a fan of Blitz//Berlin for a while before approaching them to jump on the film, their music was in my headphones while writing notes or other works often. So it was a joy when the time came that I could actually ask them to be a part of it. They are an excitable group, just down to do cool stuff, and we instantly bonded on influences and approaches to filmmaking. Like all areas of the film, our post schedule was incredibly quick so during the early stages of editing they built out about 10 cues for us to use during the edit, which allowed us to push our schedule longer than intended while having consistency of tone throughout. I think the score is rad, and the mood they create works hand in hand with the visual principles of keeping the audience off balance.

How did you find the post-production process with Editor Matt Lyon?

Matt and I had similar sensibilities with genre and with character, so our collaboration felt second nature. With the film being cerebral, and the narrative being purposely obtuse, a ton of the process was trial and discovery with how best to tell the story, taking chances where we could, while digging into the lead emotional narrative of Zooza. We were mostly working over video chat, so we would discuss a sequence and then he’d head off and try it out, and as it came back I’d get to almost experience the sequences as if for the first time. It was an interesting process, emulating the feeling of a viewer as we put things together. Once we locked, I missed our daily check-ins!

What are the films/directors that have influenced you as a filmmaker, including The Friendship Game?

There are so many! I think as each year passes, this list changes but currently I’m really into Luca Guadagnino. I really dug his installment of Suspiria even though it took me a couple of watches to fully understand it. His A Bigger Splash is one of my favorites. I’ve been a big fan of Park Chan Wook for a long time too, Oldboy took me by complete surprise and his Vengeance flicks are so much fun. Takashi Miike is another big influence, I think Audition was the first thing I saw that told me you can do anything in a narrative if the tone is right. I really love that kind of cinema.

Which themes and subject matters interest you as a filmmaker?

If I could follow a thread over most of my work, there is a common theme of forgiveness woven into it. We all put a lot of pressure on ourselves as a society, not just in terms of success but in how we see ourselves and are seen by others -— and collectively we tend to focus on good vs bad, red vs blue, right vs left, but seldom do we just see a fellow human doing their best. I’m interested in the nuance of humanity, the messy stuff, the problematic stuff, and what makes people make the decisions they make. Like the kids in The Friendship Game, I think forgiveness is the way we win. I’d like to keep exploring that theme.