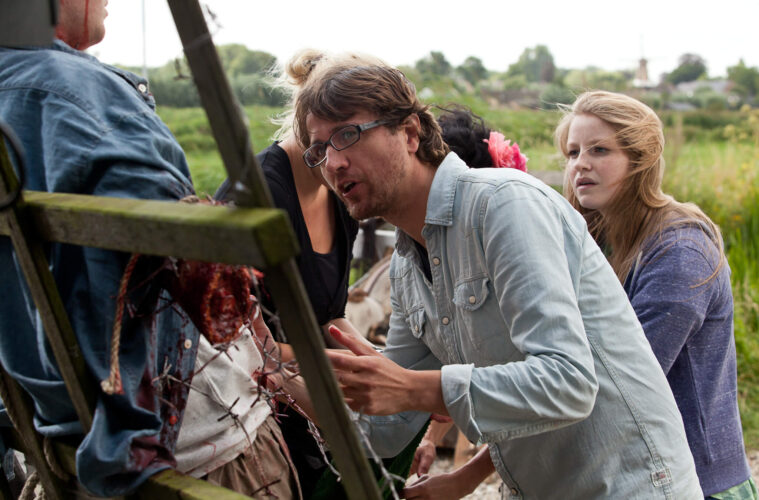 Nick Jongerius is a director, producer, editor and writer. The Windmill is the Dutchman’s antecedent excursion into film direction. The film transpires in the homeland of the director, who utilizes the allegory of the very Dutch icon of the windmill to unleash hell on a group of sin-riddled tourists. The deliverer of this hell is ‘The Miller’, a terrifying manifestation of folk myths and ancient nightmares. Nick took time from his schedule of accursed contemplations of purgatory to answer a few questions on The Windmill, directing and his own fears.

Firstly, I want to thank you for giving birth to my unique phobia of tour guides and of course windmills. Is this the type of response you are hoping for?

Hahahaha! It would be a huge compliment for the film if the number of tourists visiting Amsterdam would drop next year. It would mean that A, we delivered a film that resonates and B, that fewer sinners would be coming to Amsterdam, which is always good!

Why was the theme of repentance so prevalent in the story?

Chris Mitchell and I were looking for an interesting contraption for the miller and the kills, like Freddy who only appears in nightmares. I've been fascinated with doing something with hell and purgatory. Chris came up with the idea to set the film up like an Amicus film and have the group all share the same secret; in this case a sin. The idea that people are confronted with their sin right before the servant of hell comes to pick you up, is really scary to me.

As a native of the Netherlands, did you have any concerns about how you were going to illustrate the country of your origin on screen?

Concerns, no. I knew it was going to be hard to find the right locations, though, because everything is so densely populated here in Holland. I knew up front that foreigners would be interested in seeing landmarks like Amsterdam but I felt kind of obliged to portray the real Amsterdam as well since I’ve lived there for such a long time. Right from the start, I knew that if I was going to use the Dutch countryside I would be able to show something that is familiar but at the same time different and refreshing.

Windmills are of course synonymous with the Netherlands and have been depicted in other art forms like The Mill by Rembrandt. What attracted you to such a token of archetypal Netherlands? And did you take influence from other depictions like the Rembrandt painting?

Not really. When I chose the arena for this film I really looked at my own fears and fascinations. I always thought windmills were kind of creepy. They’re odd looking, they have no (or very little) windows, no corners and most of the time they stand very isolated in the Dutch landscapes that surround them. Actually, they are tools used for water management or grinding flour, but like many tools, they can also be deadly. For example, if you get hit by a moving blade it's like being hit by a truck at high speed. I grew up near a windmill and the thing made a profound impact on me as a child.

In a similar fashion to the previous question, did you gain inspiration or influence from film, literary or other artistic mediums for The Windmill? Can you give examples of these influences and how they helped to shape the vision you had for the film?

For the Miller’s backstory, we used two existing tales (one of a miller who sells his soul to the devil, after which the shit hits the fan. The other one’s about a miller who believed he could have eternal life by grinding the bones of humans). I was also inspired by a book of myths and sagas involving Dutch Windmills. Another big influence was the Grimm Fairy Tales. I see this film really as a fairy tale and I’m hugely influenced by Guillermo del Toro, but also visually by Brian de Palma. The razor, the split diopter shot, they are little homages to the brilliant filmmaker. And as I mentioned before, the set-up of the story and the look & feel of the characters was inspired by Amicus films and old school disaster movies.

‘The Windmill’ and your previous endeavors are virtually comprised solely from the horror genre, what is appealing about this genre for you?

I have also worked as a director of TV drama, but I have a soft spot for making horror and telling stories in this genre I guess. I'm not a true horror fan. There is a lot in the genre I still have to see. I don't like all the sub-genres, but fantasy and ghost stories really appeal to me. I like to address what scares me and make films about that.

Do you have any aspiration to experiment with a different genre of film in the future?

Yes, absolutely. I'm working on a TV-series based on a huge crime wave in Amsterdam in the early 80's. It is meant for TV but it could also become a feature film as well, but then it would probably be in Dutch. I'm also working on a film based on a true story about a Dutch Muslim girl who had to fight for her freedom from her family and father. A truly gripping story and one I'm very emotionally invested in.

Can you describe any wisdom you gained from directing your first feature film?

I always wanted to direct, but my gut feeling said I had to wait for the right moment and time. I guess I needed to get some real experience under my belt before I jumped into it. Making this film has been a real journey into myself. It sounds a bit corny perhaps, but I wanted this film to really be from my perspective, my vision. I made mistakes and still have a lot to learn, but making this film and surviving the making of it made me more balanced and sure of my life and what I can do as a director.

How do you feel both writing and directing your first feature film framed the experience for you?

Well, Chris Mitchell wrote it, we collaborated closely on it, but I would not be doing him any justice if I took credit for it. The initial idea came from me. That's the way I like to work: bring in the idea and then go on to collaborate with a talented scriptwriter like Chris. Then, when I'm on set I can distance myself a bit from the script and work with the actors on tweaking it. If it wasn't for Chris and his brilliant ideas, we would still be in development hell.

What are some of your own fears?

Fear of being alone, claustrophobia, fear of heights... the list is endless.

I don’t look much further ahead than the next project. I feel very comfortable in the budget zone we worked in for The Windmill. If it were up to me I like to stay in this budget zone for one or two more projects.

The Abductee, a science fiction horror thriller. Its Scanners meets Invasion of the Body Snatchers. It's a creepy, eerie psychological film with a great genre core. I think more films in this sci-fi horror genre should be made, at least in my humble opinion. It's a great premise. The script is almost done, written by Chris Mitchell again. There is solid interest from our sales agent, so hopefully we can make this work. Fingers crossed.

The Windmill is available to purchase now on iTunes.