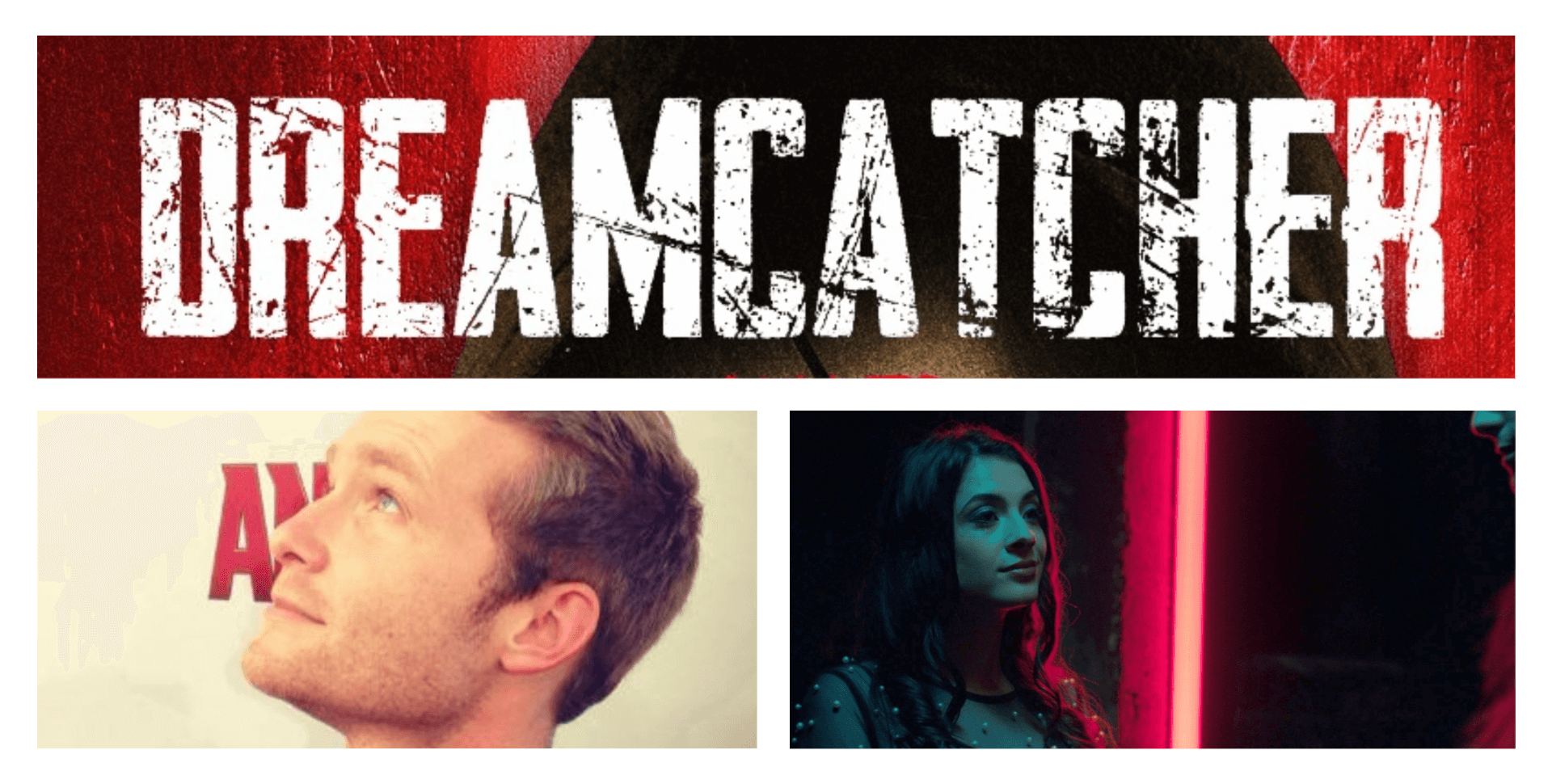 Dreamcatcher is the 2021 horror | mystery | thriller movie released by Samuel Goldwyn Films. Dylan, a.k.a DJ Dreamcatcher, is close to obtaining global stardom. Everything changes the night of Cataclysm, an underground music festival that becomes deadly when there's a masked killer on the loose.

In our interview with writer/director Jacob Johnston, he went into making Dreamcatcher — screenwriting, casting, the EDM-inspired score, cinematography, editing, moments on set. Plus, a list of his most influential filmmakers, favorite movies from the past decade, and top five horror movies.

Dreamcatcher is now available to watch via Amazon and Apple TV

What was the inspiration behind Dreamcatcher?

The inspiration was really to create something that was a bit of a love letter to 90s ensemble horror with a modern twist utilizing timeless narrative themes. I also wanted to paint a picture of psychologically complex characters who felt like real people as opposed to typified genre stereotypes. Then, essentially placing all of these elements into a giant blender set to “EDM MUSIC” - and seeing what happens. It was a very organic process in terms of developing the story, characters, and mythos.

How did you go about writing the screenplay for Dreamcatcher?

After I knew the ending, I worked backwards. Figured out who the characters were, what they wanted, what they didn’t have — how they’d interact with each other — and started diving in. I don’t typically do a formalized outline or treatment, but rather dive into the process and try to surprise myself along the way. I won’t move on to a new scene until I’m at least 98% happy with the scene I’m on. I can’t do what many writers called a ‘vomit draft’. I have to feel like it works — at least to some degree — before I move on. Otherwise, I find myself stuck in a mental glue trap. If I try to move on, I’ll always end up scrolling back up to play doctor until my brain is like, great, okay, move along. Pass Go! After the 'first draft’ which at that point is basically draft 9, or something — you wait for the producer notes. Then it’s a matter of polishes and trimming/tightening until you have that draft that really sings. For this, the chemistry of the cast really elevated the words on the page. I loved seeing that come to life.

As Dreamcatcher is your feature film debut, can you tell us your most memorable/challenging moments from filming, Dreamcatcher?

Making movies is a grueling process, emotionally and physically. But, it’s also a fulfilling process in so many ways. Bonding with the cast and crew and seeing the creative fortitude of everyone involved was the most memorable thing to me. In the indie world, there is no place [read: time] for ego. It’s all or nothing — every day. And the more we can foster a safe environment where everyone feels heard and respected — the better the experience is going to be for all parties involved. Technically speaking, the Cataclysm scenes were fairly challenging. We were supposed to shoot that sequence during our last week of filming, but through a series of factors, it ended up becoming our first week of shooting. This was two weeks out of principal photography. I had already storyboarded the scenes we were supposed to be shooting originally — and hadn’t even really started on the Cataclysm ones. But, in the end, it was great — because of the shift we actually got an extra day at the Cataclysm location, which offered additional time for us to really focus on making it as exciting and visually stimulating as possible.

Electronic dance music (EDM) is utilized in the score for Dreamcatcher. How did you find the process of working with Composer Alexander Taylor?

Alexander Taylor is a musical genius. His knowledge of both genre and music theory is beyond inspirational. He loves challenging himself, too. Trying new, experimental things that at first glance may seem out-of-the-box, but then you hear it — and it’s gold. He focused on the scoring aspect, while we partnered with EDM artists like Eva Shaw, Johnny Gleeson, and Jack Vath to craft original EDM tracks for the film. We made it a point to try and feature all original music, versus licensed music, as much as possible. For the score, I loved the idea of dissonance and strings. To stray away from brass as much as possible — and obviously utilizing synth in different and effective ways. The result was this hauntingly melodic heartbeat that rhythmically undulates as we see the journey of the film unfold. Working with Alex on finding this sound was a truly invigorating process.

How was it working with Cinematographer Matthew Plaxco to establish the look of the movie?

From the onset, during our first meeting, it was clear Matt was the guy to shoot this film. His love for the craft, both creatively and technically speaking, was palpable. We spoke the same visual language. I would talk about my love for Giallo films like Suspiria, Blood and Black Lace, and Perfume of the Lady in Black — and how the striking use of color mirrored my intention for Dreamcatcher — to which Matt would respond in all the ways we could make that happen. I would remark how much I adored David Fincher’s use of sodium-vapor colors — and how he could make a mundane setting like a living room feel cinematic and intriguing — to which Matt would say, let’s do this, this and this. It was all so methodical and honest. During the production phase, our relationship was so collaborative to the point of Matt occasionally being one step ahead of me on set. His camera and electric team were some of the hardest working people I’ve ever worked with. Truly. Their ability to quickly turn around complex lighting setups kept us from lengthy stalls in our shooting schedule. Matt has a distinct understanding of decidedly stylized filmmaking. He thrives on making the impossible somehow approachable and manageable — without ever compromising the overall vision.

Favorite scenes from the final cut of the movie? Can you tell us about the post-production process with Editor Cody Miller?

I love the finale scene. The performances, the cinematography, really everything about the scene. It feels so visually representative of all the major themes of the film, without being egregious or distracting. Like, the stage of a tragic Greek Play — you know, with a heated swimming pool and the city lights of Los Angeles in the distance.

I also love the scene between Jake and Brecken after the fallout of Cataclysm. There’s real honesty in the scene. It’s raw in so many ways. What Zach [Jake] and Emryhs [Brecken] brought to that scene elevated the material — with how willing they were to put it all on the table. No walls. No second-guessing. It was a soul-baring moment and I, along with everyone on set that day, loved seeing the end result.

Working with Cody in post was almost like being in film school again. After his initial assembly cut, he brought over his dual-monitors and massive editing setup, and we built a little editing suite in my living room. Cody would come over for about 8-9 hours a day and we’d go scene by scene trimming/tightening and trying new things. I was very anal about continuity — which drove Cody nuts sometimes — but he would always do his best to enable my manic tendencies. It’s very hard to create perfect continuity with head/hand placement from cut to cut, but Cody made a good point along the way: that if the audience is distracted by the slightest inconsistency with continuity — there’s probably more wrong with the scene, to begin with. I was always impressed with how much of a problem solver Cody was, I would talk about what didn’t work about a certain scene — whether it was the angle or delivery — and within a few keyboard clicks, he’d have things rearranged and ready to watch. Even though editorial is a tedious process, working with someone like Cody made it much more refreshing and fulfilling.

Which films and directors have impacted you as a filmmaker, and particularly on your movie, Dreamcatcher?

For Dreamcatcher, specifically, I would say the biggest inspirations were Scream, The Neon Demon, Suspiria, Night of the Hunter, Let the Right One In, and Se7en. Personally, I have so much adoration for genre trailblazers like Robert Wiene, Tod Browning, Mario Bava, and Dario Argento, Kinji Fukasaku, Tim Burton, Karyn Kusama, and most recently Chloe Zhao. I also can’t wait to see Nia DaCosta’s reimagining of Candyman!

All that being said, Jurassic Park was the film that inspired me to go into filmmaking. I first saw it in 93’, when I was five. It was a transformative moment of my childhood — I can’t really explain it outside of saying — it was an 'Ah Ha' moment. For that 2 hour period, I was taken somewhere else. It was aspirational but also terrifying. It was beautiful but dangerous. Funny, but equally impactful. Some of these things I say obviously in retrospect, but I knew from that moment — I wanted to do that for the rest of my life. Tell stories. Create worlds. Share these narrative fabrications with others and see if it could hopefully do the same thing Jurassic Park did for me.

Favorite movies of the past decade?

There have been so many! Let’s see, the first ten that come to mind are…
Snowpiercer
Parasite
The Handmaiden
Portrait of a Lady on Fire
Booksmart
Whiplash
Leave No Trace
It Follows
Nightcrawler
And a three-way tie between Promising Young Woman, The Guest, and Knives Out