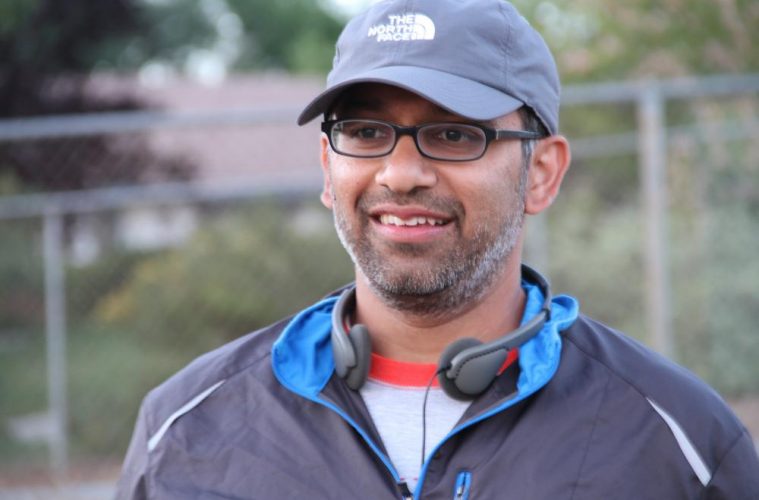 Run the Tide is Soham Mehta’s first feature film. He is a writer, editor, and director. Run the Tide stars Taylor Lautner, Constance Zimmer, Johanna Braddy and a debut performance from Nico Christou. The film revolves around two brothers who are left to pick up the pieces after their father has passed away and their drug abusive mother is put in jail. After hearing that his mother is soon to be released from jail, Reymund (Lautner) kidnaps his brother Oliver (Christou) and they travel to a coastline of California.

Did you gain any wisdom from directing your first feature film?

Absolutely! I thought that I was fairly well prepared for the experience. I’ve directed my own short films, edited feature films, and directed numerous full-length plays. So I imagined that I could extrapolate and pretty much anticipate the experience. My past experiences definitely prepared me to do the job, but they didn’t prepare me for the emotional weight of the job. Filmmaking is good and bad, up and down, a complete emotional rollercoaster. I think I will be much better prepared for that next time.

Could you enlighten me as to whether it has shaped your artistic process? In terms of, for example, how you may approach a future project.

I think that I’m a pretty reasonable person. I try to understand what everyone needs to do their job well and I understand the limitations imposed by circumstances. Despite the ambition of our film, we delivered on schedule and under budget. For my next film, I want to try to be a little less reasonable. Not to scare anyone away or anything. I still understand the responsibility of the job. But I want to push myself more. I want to expect more, and if we fail at times, that’s okay. In some ways, my first film allowed me to fully understand every job’s role and calibrate my expectations. Now I want to push those boundaries. I want to shoot for more and risk doing something surprising. And that starts with the script — ignoring some of the limitations that I previously placed on myself (budget, cast, scope, etc…). A producer will tell you when you can’t have something. You can always rewrite it, re-envision it. But let’s start with the biggest dream possible.

What made this film an alluring prospect for you?

I also write myself, so for me to work with a script that someone else has written, there has to be an insight there that I don’t have from my own experience. That’s what makes it fun for me, to see the world through another person’s experience. The core of this film is a relationship between two brothers. I’m an only child. So it was my opportunity to crawl into that experience. That’s what made it exciting for me. Rajiv had such a fresh voice when writing the relationships with the brothers. My job as the director was to let the audience into that relationship. Once I came onto the project and continued developing the script with Rajiv, we worked a lot on the plot, but the core of that relationship always stayed the same because that was authentic.

The film is primarily about a dysfunctional family, brotherly love as well as being about a mother’s repentance. However, the film does not come across as being too heavy. Was this a conscious balance that you were aiming for?

It is. I wanted to make this an accessible drama. I feel that Hollywood used to be really great at that — whether it was Dead Poet’s Society, Shawshank Redemption, Running on Empty, etc… Hollywood regularly made dramas that were somehow fun and enjoyable to watch. These days, I feel the market has split the drama category between prestige films and dark festival films. Our film falls somewhere in the middle of that. I didn’t want to make a film where the look and feel telegraphed the unfolding drama. I wanted to draw people in first. For me, the motivation is to make films that reach people that wouldn’t normally watch something about the subject matter, to break beyond the bubble.

You have gathered a talented cast for the film, what were the benefits of being able to employ this to your advantage during production?

The cast is everything. A talented cast like this makes everything easier, everything better. Working with them taught me a new level of attentive listening. There are no obvious notes to give because they gave me a good performance from the start. So, instead of spending all of our time getting to something that passed, we had time to work together and try to unlock something special. I had to listen and watch what they were doing very carefully, and try to find the one or two right notes that might trigger something for them. It was a wonderful experience. A road trip figures prominently in our film, but it’s not a road trip film in the classical sense. They don’t even hit the road until nearly 30 minutes into the film. It’s really a character-driven film, and I’m very proud of the entire cast and their performances.

Did you gain inspiration or influence from film, literary or other artistic mediums for Run the Tide? Can you give examples of these influences and how they helped to shape the vision you had for the film?

During the script development phases, Rajiv and I talked a lot about these older dramas. Three films that we kept referencing were Running on Empty, Tender Mercies, and What’s Eating Gilbert Grape. Visually, I looked at all of the Sergio Leone westerns just to see how he used his wide frame. There are a couple of times in the film where the two boys square off on opposite ends of the frame. These directly come from me spending so much of my prep time watching westerns! Dallas Buyers Club provided a lot of inspiration in their ability to create some beautiful images while shooting handheld, widescreen, and with minimal lighting. After watching and discussing that, my DP definitely committed to trying to give me freedom to shoot in all directions with minimal, mostly practical, lighting. I had a collection of paintings of the old west and depression era paintings of urban life that I shared with my creative heads. That fed into a progression from warm to cool colors that we developed for the journey from New Mexico to Santa Cruz.

You have previous experience as a writer and editor, so how was it to have only the directorial responsibilities for Run the Tide?

Well, I’ve already spoken about working with Rajiv on the script. It was a tremendous asset to be able to harness his voice and his experience to capture an authentic experience in the script. Luckily, we had a great relationship, and he was extremely responsive to all of my notes throughout our development process. He definitely wrote the script, but I was so involved, that when it came time to direct, I never had any difficulty treating it as my own. I actually asked to have an editor on this project, and we brought on Rick Grayson. I had edited all of my shorts myself but always felt that I was denying myself a crucial collaboration. But still, I’ll admit, it was initially difficult. I had two mirrored drives set up, so I could also access everything on my own AVID at home. For the first couple of scenes that Rick cut, I went back through the footage to double check the takes that he was using. Every time, he had used the best take. That helped me to trust his taste and start to let go. In a film like this, that isn’t very flashy, it’s easy for the editor to get forgotten. Rick deserves a lot of credit for shaping the performances and allowing the best moments to shine through. We spent a lot of time working together in his apartment, and I truly believe that we came up with something that neither of us would have come up with on our own. That’s the joy of the collaboration process across disciplines on a film.

Is this a particular genre you would be curious to explore in the future?

As I said before, I’m very interested in making certain ideas more accessible. For this film, the genre was already set, so my strategy focused on making the filmmaking style accessible. But when looking at an idea from the ground up, I am very interested in embedding themes that interest me into more “commercial” genres. Rajiv recently pitched another family drama to me, but I pitched it back to him as a political intrigue. Now it’s morphed into an epic set in 500 BC. We’ve also started developing a modern police thriller. So the short answer to your question is definitely yes.

Any of the projects that I’m developing could end up being the fantasy project. But I like to think of them all as doable.

The next film I hope to make is a crime story set in 1970s Hawaii called The Iron Knife I developed the script with J.D. Ho. She’s from Hawaii and brings her unique experience to the material. The script is ready, so we’re just starting the process of trying to put it together.

Run the Tide will be available to watch in select theaters
and through VOD/Digitial HD platforms on December 2.