Trysten Cain
DirectorsThe CineFilesThe Industry
David Fincher has established himself as a filmmaker with great reason and purpose. There probably isn’t a project that he couldn’t get produced at this point in his career. There’s a distinct style to his work, a certain level of quality to his films, which stands him out above all the rest. He’s known for being a filmmaker who makes movies from the eyes of the audience. His techniques and approaches are always in favor of getting the viewer as involved emotionally and intellectually as possible while unraveling an engaging story in a competent and beautiful way on a technical level.

But even he started somewhere. Working as a visual-effects producer and assistant cameraman, eventually directing commercials and music videos, all leading to his first feature film. Now David Fincher is a director known for taking chances, for going the extra mile, for setting high expectations. None of these things could be a part of his reputation had he let a producer or studio head shoot down his ideas and aspirations for a project. A lot of this acclaimed films would never have been created had he taken the many “No’s” he received as a final answer.

Through his experiences David Fincher has some basic and useful advice for young filmmakers. Some may find it comes across as conceited and an unfair expectation for those green to the industry, but overall it’s sound words of wisdom for anyone with specific goals or dreams in mind. 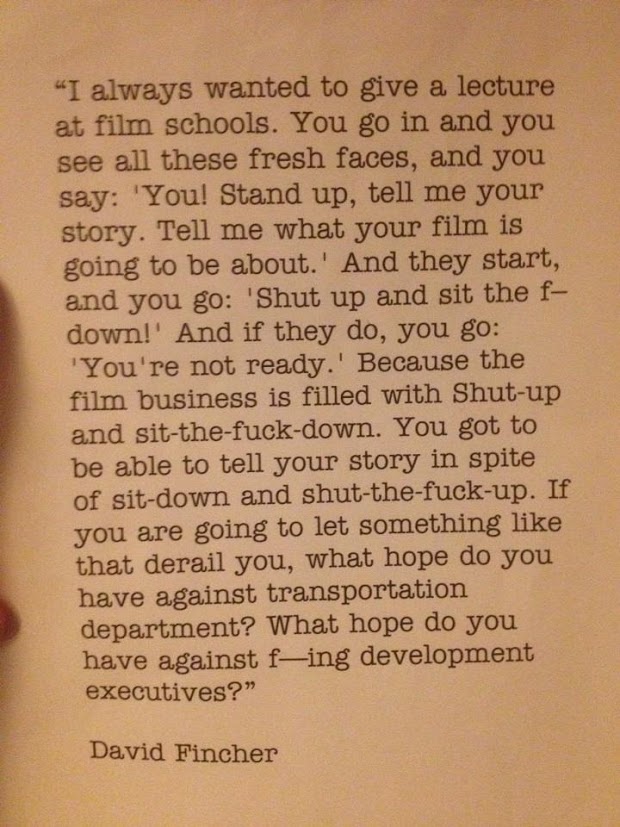 For one example, his 1995 neo-noir psychological thriller Se7en wouldn’t have nearly as memorable an ending had the studio gotten their request. Luckily Fincher believed so strongly in the original script, and even more fortunate had actors who stood behind the director and promised to walk away if changes were made, that we are all graced with some of the most haunting and tense final minutes in cinema.

The level that David Fincher insisted on researching before producing his 2007 crime drama Zodiac to ensure the most accurate information and most involved first-hand experience be incorporated is incredibly admirable. He personally went out and interviewed victims and those involved in the original Zodiac killer case, spending months pouring over the original police reports, all to make the film as accurate and factual as possible. The original screenplay didn’t contain many bits of information discovered during this pre-production stint, and Fincher’s insistence that he be allowed to gather such information and have the script altered so greatly is why we’re left with a masterful film that was worthy of being nominated for the Palme d’Or.

None of this would have happened if he had simply shut up and sat the fuck down.  And his unwillingness to do so today (alongside many other impressive filmmakers) is one of the major reasons why the fight to keep film alive as a medium to shoot on is still going strong. David Fincher cares deeply about storytelling and cinema, and when he’s at the helm it’s everyone else who better sit down and shut the fuck up.